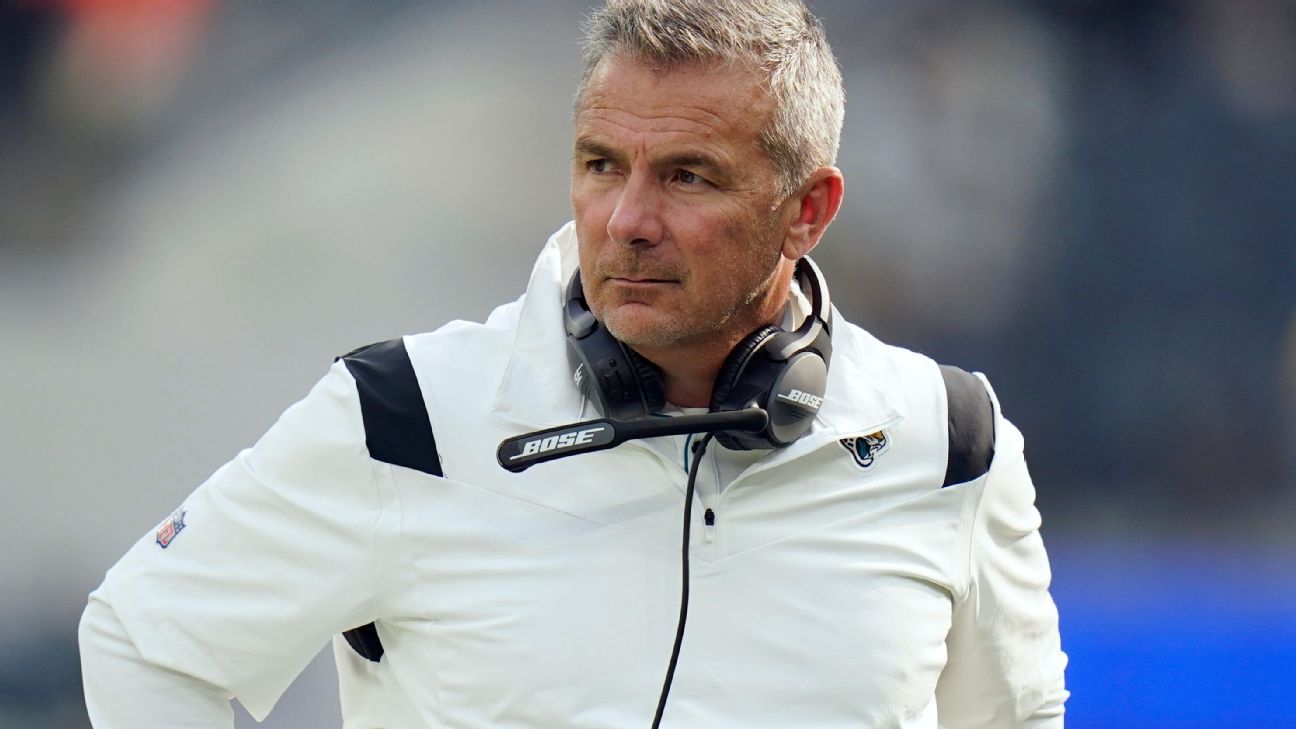 JACKSONVILLE, Fla. — Urban Meyer believes the Jacksonville Jaguars will eventually become a great franchise but is sorry that he’s not going to be there to witness it.

Meyer told NFL Network on Friday he was “heartbroken” over the way his 11-month tenure with the franchise ended.

“I just apologize to Jacksonville,” Meyer told NFL Network. “I love Jacksonville. It’s one of the reasons I took the job. I still think Shad [Khan is] a great owner. It’s heartbreaking. I just had a dream of it becoming a destination place with a new facility he agreed to build and some day to walk into that stadium where it’s standing room only. Because I know how bad the people of Jacksonville want it.

“So, I’m just heartbroken that we weren’t able to do that. I still believe it’s going to be done. It’s too good of a place.”

Meyer was fired early Thursday after going 2-11 and committing a string of embarrassing missteps that included two viral videos of him behaving inappropriately with a woman who wasn’t his wife, reports of him berating his assistant coaches, trying to hire a strength coach who was accused of making racist remarks and bullying Black players at Iowa and having No. 1 overall draft pick Trevor Lawrence alternate days with the first team with Gardner Minshew during training camp.

Former place-kicker Josh Lambo on Wednesday also accused Meyer of kicking him during warm-ups before an August practice, an allegation that Meyer disputed in the NFL Network report.

Sources told ESPN earlier Saturday that the Jaguars fired Meyer with cause and don’t intend to pay him the remaining four years on his contract. On Friday, a spokesman for Khan released a statement to The Associated Press that said Khan made the decision to fire Meyer after last Sunday’s 20-0 loss at Tennessee.

Yet the Jaguars allowed Meyer to spend the next three days in the building, meet with the media twice and oversee Wednesday’s practice. Meyer left the facility shortly after the news of Lambo’s allegations broke on Wednesday afternoon and did not return, and the Jaguars released a statement from Khan announcing the firing at 12:45 a.m. ET Thursday.

Meyer’s last game was the fourth shutout loss in franchise history and first since Week 5 of the 2009 season. The Jaguars managed just 192 yards of total offense, the fourth game this season in which they had 200 or fewer yards. Video of the postgame handshake between Meyer and Tennessee coach Mike Vrabel, who spent two seasons on Meyer’s staff at Ohio State, wasn’t a good look for Meyer. It lasted one second, and Meyer wouldn’t look at Vrabel.

Meyer said after the game that “losing sucks. That’s all I can tell you. It eats away at your soul.”

Two days before that game, Meyer said he still had confidence he could win at the NFL level but that it was a different process than he thought.

“Yeah, I do. Most certainly,” Meyer said. “It hasn’t exactly materialized the way I expected it to have, the experience of winning games. I knew that this was somewhat of a build. I also really believe that we have plenty of good enough players to go win games. I still believe that. That’s why I get so disappointed sometimes with our coaching staff or myself, because I think we can do better than we’re doing. Really disappointed.”

And now, little more than a week later, he is sorry it didn’t work out.

Advantage, Novak Djokovic in the race to be tennis’ GOAT
Baffert can saddle up after 1-year N.Y. racing ban
Homa rallies from 5 shots down to win Farmers
Omenihu in line to play for Niners despite arrest
Why we might have to wait until 2024 to see Artur Beterbiev vs. Dmitry Bivol in a must-see matchup