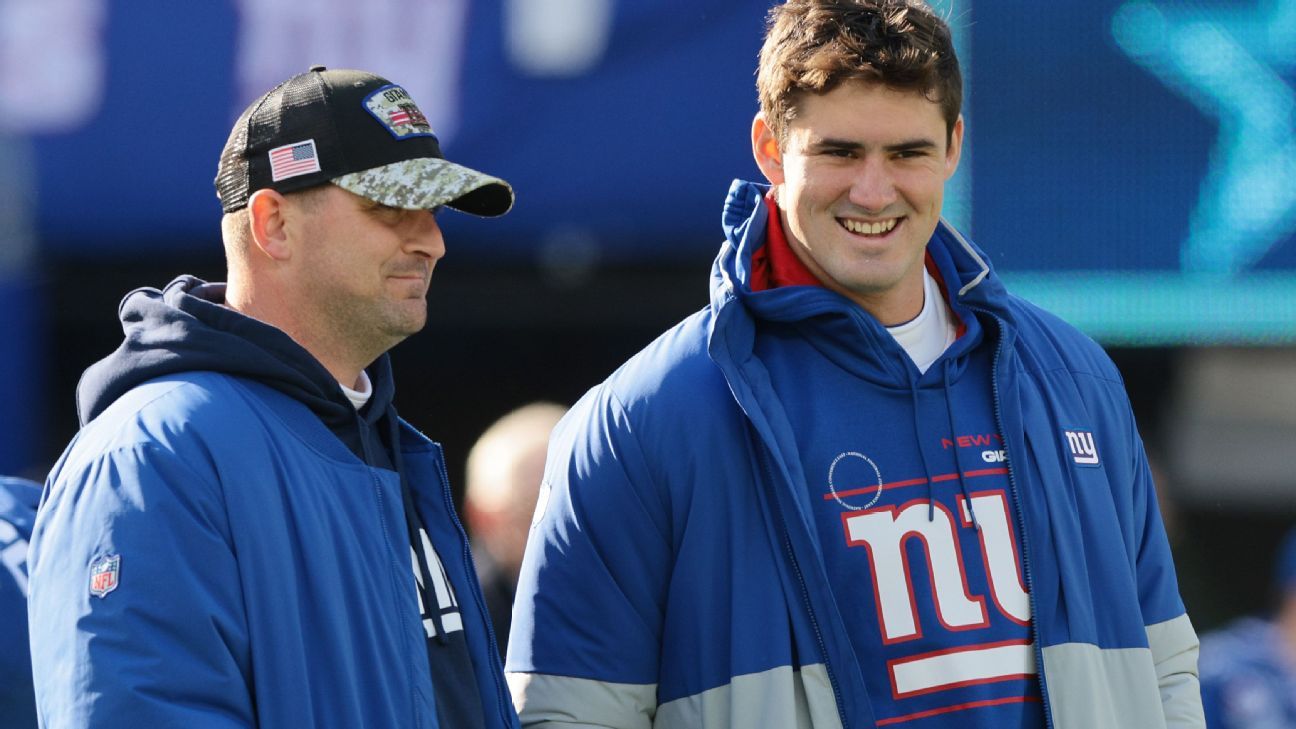 EAST RUTHERFORD, N.J. — The New York Giants shut down quarterback Daniel Jones for the remainder of the season because of his neck injury, the team announced Monday. It prematurely ends what many considered a make-or-break year for the young quarterback.

Jones, 24, was officially placed Monday on injured reserve. He was hurt early in a Week 12 win over the Philadelphia Eagles, but managed to finish the game. He will end up missing the final six games of this season with what is being called a sprained neck.

The Giants still remain optimistic about Jones’ future after he completed 64.3 percent of his passes for 2,428 yards with 10 touchdowns and seven interceptions.

“Over the course of the past few weeks, Daniel has been examined by Dr. Frank Cammisa of Hospital for Special Surgery and Dr. Robert Watkins of the Marina Spine Center at Marina Del Rey Hospital,” Giants head trainer Ronnie Barnes said in a Monday statement released by the team. “Our medical team has continued to consult with Dr. Cammisa and Dr. Watkins regarding Daniel’s condition and symptoms, and at this point, Daniel has not been cleared for contact.

“We felt the prudent decision was to place Daniel on injured reserve for the remainder of the season. With continued rest and treatment, we expect a full recovery.”

The Giants do not believe this is something that Jones will have to worry about in the future. All he needs is time and rest. Surgery is not an option.

“I’ve been adamant in saying with all the information we’ve been given from the doctors involved and the medical team, that there is no, at this moment, concern for a long-term injury,” coach Joe Judge said on a Monday conference call. “That this is more of a precautionary measure to make sure something isn’t aggravated or agitated before it is healed and doesn’t turn into something that is chronic and long term.”

It’s almost as if Jones ran out of time. The Giants are 4-10 and have three weeks remaining in this lost season.

New York plays on the road Sunday against the rival Eagles. Mike Glennon or Jake Fromm are expected to start in Jones’ place.

“The medical team has been monitoring how the neck has progressed over the last few weeks. They didn’t think they saw enough progress to clear him for contact with the time remaining in the season,” Judge said. “They didn’t believe it would be the smartest move to put him out there that they didn’t think he would be fully healed within that timetable and the best thing for him right now is to start on having a full recovery with rest and treatment.”

While the injury isn’t expected to affect Jones’ playing future, it could affect his future with the team. The Giants have to make a decision on the fifth-year option on Jones’ rookie contract this offseason. That would guarantee him in the range of $20 million for 2023.

Any uncertainty with the neck or Jones’ health would make that a hard number to swallow. This is the third straight season that the No. 6 overall pick in 2019 will miss time because of an injury.

Jones had a high ankle sprain his rookie season, a hamstring injury last year and now the neck problem.

The Giants still seem to have confidence in him moving forward.

“Yeah, I’ve seen enough growth from Daniel to tell us he’s a guy we want to go ahead and play with,” Judge said. “In terms of the business aspect of it and different things, I’ll let different departments in this organization handle that stuff. I’ll coach the players.

“When it comes down to Daniel our concern right now is getting him back and healthy and getting him prepared for next year.”

The last-place Giants, mired in a three-game losing streak, have struggled mightily without Jones. In those three losses, Glennon failed to top 200 yards passing in any of them, and was picked off three times Sunday in a 21-6 home loss to the Dallas Cowboys.

“Self-inflicted wounds,” Glennon said after the loss, in which he threw for just 99 yards with three interceptions. “There were a couple of times we did move the ball well and then just ended up with field goals, and then a couple of kind of dumb decisions on my end forcing the ball that were not good decisions.”

Fromm, signed three weeks ago off the Buffalo Bills practice squad, finished the game against Dallas. He went 6-of-12 for 82 yards in the Giants’ final drive.

Judge is going to take a look at Glennon and Fromm this week before making any final determination about who will start in Philadelphia.

“Jake did enough to be in consideration,” Judge said. “We’ll see how this week of practice goes. Obviously, there is a big difference between starting an entire NFL game and coming in at the end of the game when a team is playing more of a two-minute/prevent mode. That is not a knock on Jake. That is just the reality and truth. So we’ll get Mike and Jake ready for this week. We’ll make the determination of who is going to start at a later time.”

Jones wasn’t the only major Giants injury coming out of Sunday’s loss to the Cowboys. Wide receiver Sterling Shepard was also placed on injured reserve Monday after tearing the Achilles tendon in his left leg. That prompted New York to sign linebacker Jaylon Smith and cornerback Jarren Williams off the practice squad to the active roster. Smith, the former Cowboy, made four tackles in his Giants debut Sunday after just two days with the team.

The Giants have been hit by an inordinate number of injuries this season. Jones, running back Saquon Barkley, tight end Evan Engram, wide receivers Kenny Golladay, Kadarius Toney, Darius Slayton and Shepard have all missed at least two games.

The wide array of injuries and ailments are almost hard to explain, with Jones being the latest to miss games. It has contributed greatly to the derailment of their season.

“No idea. It’s part of football, sadly,” Barkley said. “That’s the game we play, and we’ve played since kids and it’s the game that we love.

“Just bad luck, I guess you could say.”

Shutting Jones down at this point still seemed an easy decision. It’s one that the locker room understands considering the circumstances and the injury — his neck.

“Daniel is a very talented quarterback, very hard working and a good leader for us,” left tackle Andrew Thomas said. “It sucks not being able to finish out the season with him, but definitely you want him to take his health seriously and make sure he’s 100 percent before he steps back on the field.”