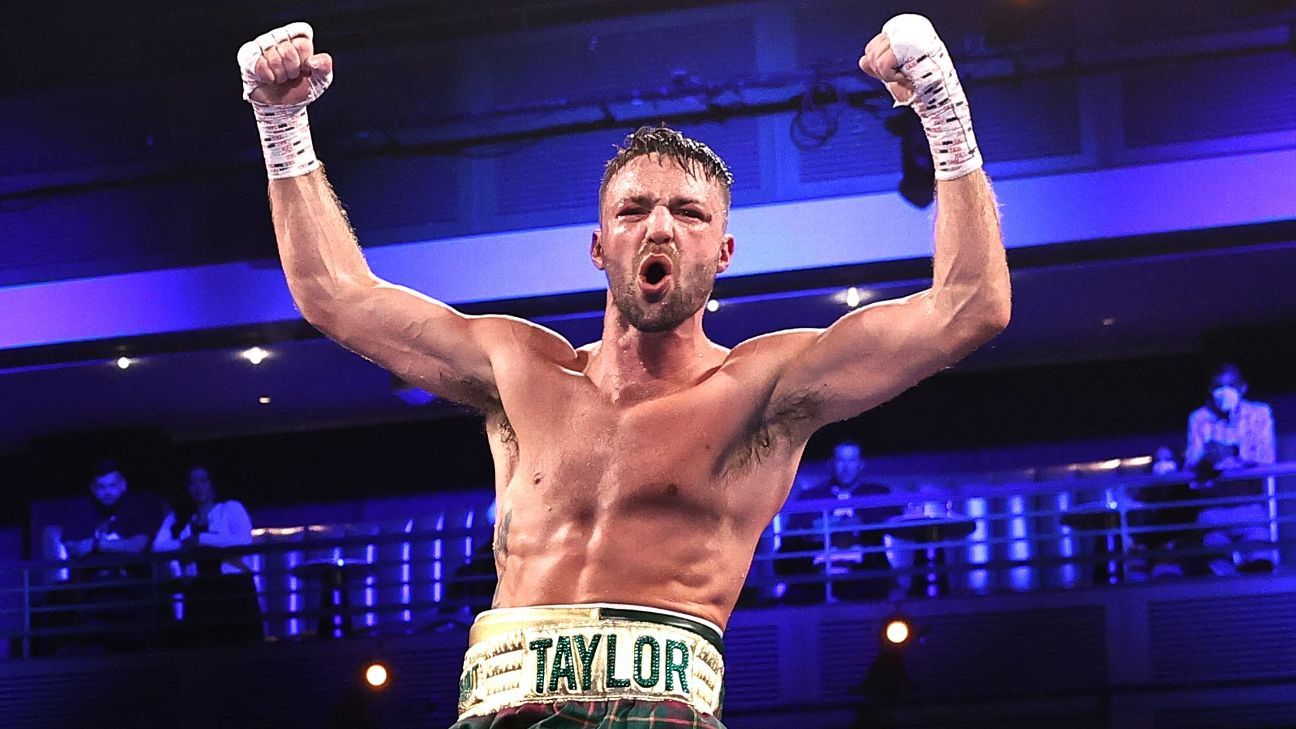 Trying to separate the outstanding successes of Tyson Fury and Josh Taylor is desperately hard — and inevitably invites debate — but ESPN’s British pound-for-pound king going into 2022 is… the world undisputed super-lightweight champion Taylor.

The Scot finished 2019 as ESPN’s No. 1 pound-for-pound fighter from the UK, but was knocked off the same rankings by WBC world heavyweight champion Fury this time last year.

Fury delivered the goods once again in 2021, and his dramatic 11th-round knockout of American Deontay Wilder to retain his WBC belt and preserve his status as the world’s best heavyweight in October was his best performance to date. The 33-year-old is in the best form of his life after an even better year than 2020, but Taylor just edges it to ESPN’s UK pound-for-pound No. 1 for his unanimous points win over American Jose Carlos Ramirez in May.

Taylor, 30, captured Ramirez’s two belts and is now owner of all four world titles as boxing’s only men’s undisputed world champion along with Mexican Saul ‘Canelo’ Alvarez at super-middleweight.

Both the performances of Taylor and Fury on American soil, without the support of any travelling fans, secures their place in history, but Taylor’s achievement had more hardware on the line. Taylor beat the best there is at his division to unify all the belts in only his 18th fight while Fury still has more to do — face the winner between Oleksandr Usyk and Anthony Joshua for the other three world heavyweight titles — if he wants to match that achievement.

Up from 2nd place.

Taylor, 30, made history by becoming Britain’s first four-belt undisputed world champion with a unanimous points win over Ramirez in May.

The Scottish boxer became only the fifth male boxer to win a unification title fight with all four major belts (WBC, WBA, IBF and WBO) on the line when he floored Ramirez in the sixth and seventh rounds with a left hook and left uppercut, before weathering late pressure to win by scores of 114-112 on all three scorecards in Las Vegas.

Taylor is world No. 1 at 140 pounds, but he will have to do more than a Feb. 26 defence against England’s Jack Catterall to stay top of our UK pound-for-pound list and a step up to the ultracompetitive welterweight divisions — which sports sharks like Terence Crawford, Errol Spence and Virgil Ortiz — perhaps beckons for the second half of 2022.

Down from 1st place.

Fury, 33, is a big man for the big occasion and proved as much in October when he knocked out Deontay Wilder in the 11th round after delivering a boxing clinic in the first defence of his WBC world heavyweight title in his second reign as champion.

After stopping the American in 2020 for the belt, and 18 months until the third instalment of their trilogy, Fury conjured up his best yet and put Wilder down in Rounds 3, 10 and 11. Fury recovered from a crisis in Round Four — he was floored twice — to dominate the fight in Las Vegas.

The “Gypsy King” is the world’s leading heavyweight and only got knocked off our British pound-for-pound throne by the slightest of margins.

Okolie, 29, was not even in ESPN’s UK pound-for-pound Top 10 list a year ago, but the London-born fighter finishes 2021 at No. 4 after he won the WBO world cruiserweight title in emphatic fashion via a sixth-round knockout of Krzysztof Glowacki in March. Hethen made an impressive first defence in September when he knocked out the previously unbeaten Dilan Prasovic inside three rounds. Okolie is in hot form and was last taken the distance in September 2018.

If this list was about who has the best nickname, “The Sauce” would arguably come out on top (Callum Smith, who is known as “Mundo” after his childhood obsession with the Teenage Mutant Ninja Turtles, also has a good case), and Okolie can climb higher in the UK pound-for-pound list next year if he can secure and win a unification title fight.

Down from 3rd place.

Joshua, 32, lost his three world heavyweight title belts this year and slides down our UK pound-for-pound rankings as a result. Usyk unanimously outpointed the English boxer in London in September to end Joshua’s second reign as champion in a second defence. To win the WBA, IBF and WBO belts back in a rematch, expected to take place early next year, Joshua will have to refine his strategy if he is to overcome the slick skills and balletic movement of Usyk. Can Joshua utilise his power against Usyk and pin down the slippery Ukrainian second time around? His career at the top level perhaps depends on it.

The Jamaica-born Londoner gets a long overdue and deserved shot at a world title in 2022 and is in talks to face WBC king Fury, possibly in March or April and expected to be in England or Wales. Whyte, 33, is the official mandatory challenger and any failure to make a deal with Fury would still see Whyte challenge for the full and vacant world title in 2022.

Whyte returned to form in 2021 and re-entered our UK pound-for-pound rankings by gaining revenge over Russian veteran Alexander Povetkin in March. After getting wiped out by Povetkin in a fifth round upset in 2020, Whyte dominated the rematch before forcing a fourth-round stoppage. It was a convincing win, and it will be interesting to see Whyte against one of more of the other elite heavyweights — Fury, Usyk, Joshua or Wilder — in 2022.

Edwards is one of four world champions from the U.K. (Fury, Okolie and Taylor are the others; Wood holds the WBA secondary world featherweight title) and has enjoyed a brilliant breakout year, after defending his IBF world flyweight title via unanimous decision over Jayson Mama earlier this month. Edwards, from London, ended the reign of Moruti Mthalane by unanimous decision in April and floored Mama on his way to a wide verdict. The 25-year-old is No. 5 in the ESPN flyweight rankings but unification fights could be a dangerous route for Edwards in 2022.

Down from 5th place.

After losing a unanimous decision to Alvarez a year ago, which cost the Liverpool boxer his WBA world super-middleweight title, the 31-year-old made a convincing and chilling debut at light-heavyweight in September. Just ask Lenin Castillo about Smith’s punching power after stepping up a division. In worrying scenes, Dominican Republic’s Castillo needed lengthy treatment in the ring and then a check-up at hospital after Smith blasted him out in two rounds. A world title shot — Artur Beterbiev or Dmitry Bivol seem most likely — or at least an eliminator has to be the aim for Smith in 2022.

The middleweight has had a difficult year to contend with, after the death of his brother Sebastian, and frustration with fights in 2021 (opponents dropping out) which has stalled his progress, but a Jan. 29 date against British rival Liam Williams is potentially a good step for the Brighton-born boxer. Eubank, 32, is well placed with the WBC (No. 2) and WBA (No. 1) world governing bodies, so next year could be a big one for him. Ryota Murata, the WBA champion from Japan, is perhaps the safest route for Eubank to winning a world title for the first time.

Down from 7th place.

Joyce’s progress is being held up by lack of title or big fight opportunities, despite a good win — by sixth round TKO over former title challenger Carlos Takam in July — earlier this year. Fury is being lined up to face Whyte next, and says (presuming he wins) he then wants to fight Joshua (twice). Usyk defends his WBA, IBF and WBO belts against Joshua in the first half of 2022, which leaves Joyce — and others — waiting for their chance. But at 36, Joyce (No. 2 with the WBC, No. 1 with the WBO) could do with a shot sooner rather than later and he will hope he can get it as a late replacement in 2022, or if the titles become splintered.

Some would argue Michael Conlan and former world champions Josh Warrington and Kid Galahad deserve to be above Wood, but the 33-year-old had a better year than all of them. Wood only won the British featherweight title in February and was not fancied to trouble China’s Xu Can in July. But he capitalised on a sluggish performance from Can to pull off a Round 12 stoppage for a big shock to win the WBA ‘”regular” featherweight title, the organisation’s secondary world title. Can went into the fight as went into the fight as ESPN’s No. 3-rated featherweight — but Wood was inspired from start to finish, which is why he deserves the nod over the more familiar featherweight names from the UK.

Warrington was stopped by Mexican Mauricio Lara in February, one of the biggest shocks of 2021, and their rematch in September ended in an early technical draw due to Lara suffering a cut. Galahad was on course for a good year after winning his first world title in August, but lost the IBF belt in another big upset to veteran Kiko Martinez by knockout in November. Conlan returned from injury this year and has been regaining form ahead of a title tilt in 2022, possibly against Wood.