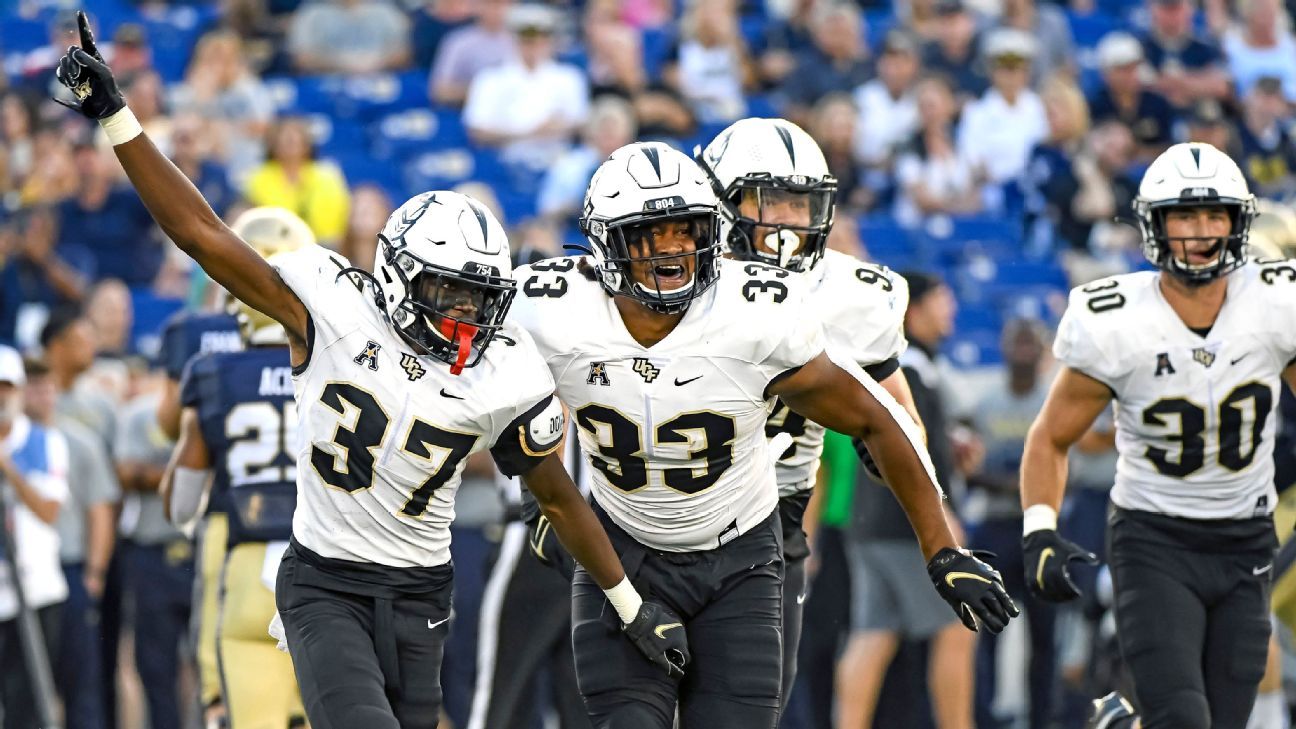 And now, for a bowl matchup three years in the making, we take you to an elementary school in Orlando, Florida, for a brief glimpse at the game everyone is talking about in the state.

(By everyone, we mean the tens of thousands of University of Florida and Central Florida alums across the state.)

It is the last Friday before the holiday break begins, with five minutes to go until dismissal. The teacher asks her fifth-graders, “What are you looking forward to most about winter break?”

Hands shoot into the air.

One boy says visiting his grandma. A girl says she is going on a cruise with cousins. Then it is time for a boy in the back of the room to answer.

“I’m going to the Gasparilla Bowl between UCF and UF!”

Pandemonium ensues, as the students scream wildly about the game. Another girl chimes in and says she is going with her grandparents, but it might be weird because she is a UCF fan and they are Gators fans.

After a wild regular season, bowl season is upon us, including the College Football Playoff. Here’s everything you need to know.
CFP preview &#187 | Complete bowl schedule &#187
Players, storylines for every bowl game &#187
Previews: Fiesta | Rose | Sugar

Predictions for all 44 bowl games

The screaming reaches such a fevered pitch it is hard to tell who is rooting for UCF and who is rooting for UF, but that is beside the point. The fact that the sold-out Union Home Mortgage Gasparilla Bowl on Thursday night (7 ET, ESPN and the ESPN app) elicited such emotional reactions goes to show how UCF and UF fans have turned a matchup with two all-time meetings into a budding, blood-thirsty rivalry, complete with vitriol, finger-pointing, chest-beating and most definitely enough Twitter beefs to fill industrial-sized freezers across the fair peninsula.

Of course, nobody on the Florida side calls this a “rivalry,” what with the last meeting between the schools happening in 2006 — a 42-0 Gators victory, back when UCF was still in Conference USA. Florida’s rivals are Georgia, Florida State and Tennessee, and sometimes LSU and other times Miami on the off chance they play, but that is it.

On the UCF side, oh, this is very much a rivalry, thank you very much. Why wouldn’t it be, with the Knights having finally reached a level that should put them in the same conversation as Florida and the heated exchanges between fan bases that typically mark what it means to be, you know, rivals?

It was not always like this. For nearly their entire collective history as FBS programs, Florida and UCF coexisted peacefully because there was no reason to behave otherwise. UCF was the plucky upstart that was doing its own thing in Orlando, 120 miles from Gainesville, and bravo, it made a Fiesta Bowl and had Blake Bortles drafted in the first round, but really that had nothing to do with three-time national champion Florida.

Then came the 2017 season, when UCF finished as the only undefeated team in FBS and declared itself national champion — much to the chagrin and collective eye roll of everyone in the Power 5. Florida, meanwhile, finished 4-7 that season. So UCF felt it could finally flex a little bit and turn the “big three” in Florida — UF, FSU and Miami — into the “big four.” So the school and its fans strutted and talked and did more talking and bragging and lots of social media gifing. Suddenly, black and gold UCF flags dominated houses and cars across Orlando, overtaking Florida paraphernalia almost overnight.

Beyond screaming, “Play an SEC schedule!!!” there was little Gator fans could say in response.

Florida-UCF was a matchup absolutely begging to be played. And yet, UCF ended up in the Fiesta Bowl against LSU and Florida ended up in the Chick-fil-A Peach Bowl against Michigan. Needless to say, this did not go over particularly well among the UCF fan base, which bombarded Florida athletic director Scott Stricklin on Twitter with accusations he rigged the whole thing as a member of the College Football Playoff selection committee.

For the record, Stricklin was recused from the room when Florida came under discussion and repeatedly said he had nothing to do with the NY6 matchups. UCF officials were told that the committee did not want to put the same team in the same bowl game two years in a row, and since the Knights won the Peach Bowl in 2017, that meant they had to play somewhere else in 2018.

That did not stop UCF fans from accusing Florida of ducking their team and being cowards, and at this point, Florida simply had had enough of “little brother” throwing a collective tantrum. Already during the 2018 season, former Florida quarterback Luke Del Rio got into Twitter arguments with UCF fans, in one post calling them “delusional” and in another bashing the Knights’ schedule.

BUT! As long as #UCF continues to play nobody and give up tons of points/yards to those cupcake teams, they will never get into a 4-team #CFBPlayoff and they wouldnt get in an 8-team playoff either.

Y’all are still at the #kidstable, don’t get ahead of yourselves…

The anger on both sides escalated after Stricklin publicly floated the idea that Florida would be open to playing UCF in a two-for-one deal, meaning two UF home games for one UCF home game. Then-UCF athletic director Danny White, who was adamant about playing only home-and-homes against Power 5 opponents, said (in so many words): How DARE you insult us with this FEEBLE OFFER!

The fan bases took sides. Florida fans screamed, “If you are sooo good, why are YOU now ducking US!” UCF fans screamed back, “STOP TREATING US LIKE WE’RE USF!”

The sides retreated into their corners, both seething while continuing to claim superiority over the other. Over the past five seasons, UCF has the better overall record (49-12, compared to 39-22 for Florida), but the Gators have more New Year’s Six appearances (3-2).

After White left for Tennessee in early 2021, new UCF athletic director Terry Mohajir changed course on the Knights’ nonconference scheduling philosophy. Florida and UCF were able to nail down a two-for-one agreement that begins in 2024 in Gainesville.

But now comes the matchup even earlier than we all expected.

When he was hired in February, UCF coach Gus Malzahn said that he wanted to play Florida, and he would do it in the parking lot if he had to. Now that the game is happening Thursday, both he and his players welcome the challenge.

“It’s a big deal, there’s no doubt about it,” Malzahn said. “It’s going to be a great challenge for us, but I know our players are excited.”

So are the fans, obviously. The Gasparilla Bowl, played at Raymond James Stadium in Tampa, Florida, normally tarps off the upper deck and sets seating capacity at 40,000. When UCF played there against Marshall two years ago, it set the Gasparilla Bowl attendance record of 33,539. But after UCF-Florida was announced as this year’s matchup, UCF received more than 20,000 ticket requests. The game is sold out and Raymond James Stadium will be at full capacity at 65,000.

UCF alum Adam Eaton, host of the popular podcast, “Sons of UCF,” explained his school’s perspective this way: “I’ll use a Christmas Day analogy. UCF has been at the kids’ table and has been trying to tell everyone that we belong on that big stage. And Florida just wants no part of letting little brother get any sniff of success. I think that’s part of what the construct here is: This is UCF fighting for respect. This is now a chance to finally settle it on the field.”

Of course, UCF (8-4) is a far different team than the one it was in 2017 and 2018. This season has proven to be particularly challenging given the injuries to key starters up and down the roster, including quarterback Dillon Gabriel, who announced he is transferring to UCLA.

Florida (6-6) has not had the season it anticipated, either, and goes into the game with interim coach Greg Knox and without a host of players who are injured (quarterback Anthony Richardson will not play after undergoing knee surgery) or have decided to either opt out or transfer. Emory Jones will start at quarterback before entering the transfer portal himself.