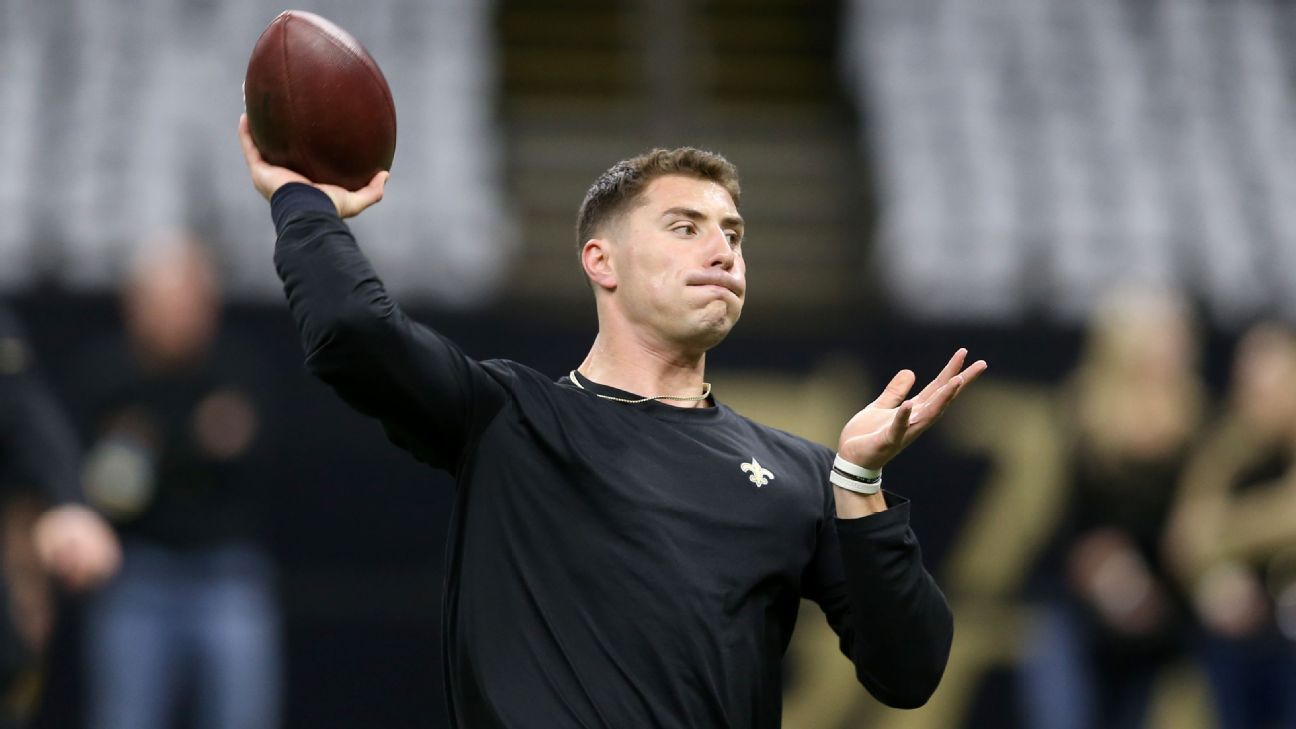 If they are unable to return, that would put rookie Ian Book in line to make his NFL debut against the Miami Dolphins on Monday Night Football.

The Saints (7-7) have also been without coach Sean Payton since Friday because of a positive COVID-19 test.

Book has not tested positive, sources told ESPN, but the Saints will likely have to add depth since he is the only healthy quarterback on the roster or practice squad. Running back Alvin Kamara would be the emergency quarterback behind him.

Book, who was drafted in the fourth round out of Notre Dame, would be the fifth quarterback to start for the Saints during the 2021 calendar year. Drew Brees retired after making two playoff starts in January and Jameis Winston suffered a season-ending ACL tear in Week 8 before Siemian and Hill took turns replacing him.

As a result of that attrition, the Saints rank an uncharacteristic 30th in the NFL this season with 194.6 passing yards per game and last with a completion percentage of 57.4.

No matter what happens at quarterback, the Saints will rely heavily on a defense that became the first in 15 years to shut out Tom Brady in last Sunday’s 9-0 win at the Tampa Bay Buccaneers.

It would help if the Saints can get at least one of their former All-Pro offensive tackles, Terron Armstead and Ryan Ramczyk, back from lingering injuries.

NFL Network first reported on Hill’s status, while NOLA.com was first with the news about Siemian.

Book, 23, went 30-5 as a starter at Notre Dame, finishing with the most wins in school history. He went lower in the draft, in part because he is just 6 feet tall. But his mobility and ability to make plays when the pocket breaks down were among his calling cards at Notre Dame.

This will be the latest hurdle for a Saints team that has dealt with a barrage of significant injuries, a hurricane displacement to Texas for the first month of the season and now a handful of COVID-19 issues. They were missing a large part of their assistant coaching staff in a Week 2 loss at the Carolina Panthers because of a COVID-19 outbreak.

The Saints were on the other end of an infamous game last year when COVID-19 protocols wiped out the Denver Broncos‘ entire quarterback room. The Saints beat the Broncos 31-3 while Denver used a combination of practice squad wide receiver Kendall Hinton at quarterback and direct snaps to running backs.

Sources: Mets, McNeil agree to $50M extension
“Yes, Yes, Yes…”: Ravindra Jadeja’s Unique Response On Whether He Is Ready For Australia Test Series
“Will Nag Me For Rest Of My Life”: Australia Star On Missing India Tests
UGA: SUV in deadly crash wasn’t for personal use
“Not Every Test Batsman Needs To Be A Big Hitter”: Sachin Tendulkar To Cheteshwar Pujara On Birthday