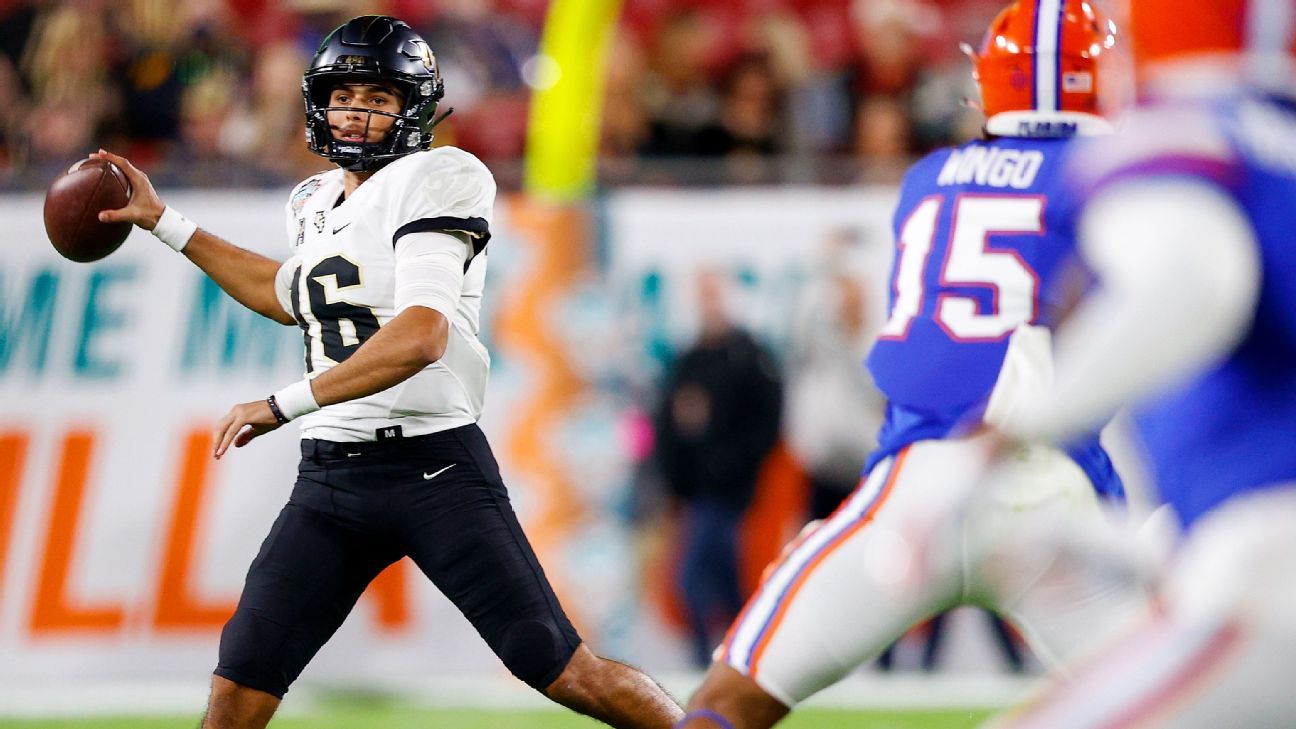 As the final seconds ticked off UCF‘s 29-17 win over Florida in the Union Home Mortgage Gasparilla Bowl on Thursday night, the UCF football Twitter handle was quick to make a declaration: “Sunshine STATEment.”

Indeed, UCF not only made history with its first win over Florida. It was also UCF’s first win over any Power 5 program in the state. At 9-4, UCF finishes this season with the best record in Florida — the same way it did in 2017 and 2018.

For Florida, it was another embarrassing loss to end a season filled with them. The Gators opened the season ranked No. 14. By the end of it, coach Dan Mullen had been fired and they finished 6-7, their first losing season since 2017. It was also the program’s first loss to an in-state school not named Florida State or Miami since Stetson in 1938. And the Knights won the game despite a long injury list to some of their top players, including quarterback Dillon Gabriel, who is no longer with the team after transferring to UCLA.

First-year coach Gus Malzahn was on the injured list, too, having broken his leg last month when he was inadvertently hit on the sideline against Tulane.

“I am so proud of our guys. The character that they have showed through tough times this year is amazing. A lot of teams would have splintered when faced with what we had.”

To be clear, the team Florida took into the bowl matchup Thursday night was irrelevant to anybody at UCF. It was a game UCF had been wanting to play since 2018, when both teams qualified for New Year’s Six games but were sent to different games (UCF to the Fiesta Bowl to play LSU; Florida to the Chick-fil-A Peach Bowl to play Michigan). UCF felt slighted, and that spawned heated takes between the fan bases over the ensuing years.

But now? UCF gets those bragging rights and will never let Florida forget what happened on a cool night in Tampa.

Receiver Ryan O’Keefe had 251 all-purpose yards en route to the game’s Most Valuable Player honors, and Malzahn said the goal was to get him “at least 15 touches. You saw what he did with it when he got the ball. He is one of the best playmakers in the game.”

O’Keefe said afterward he was inspired to play in honor of former UCF running back Otis Anderson Jr., who was shot and killed during a domestic dispute with his father last month.

“It hit me hard when he passed away,” O’Keefe said. “I saw his jersey tonight and said I was going to play for him.”

UCF wore Florida out in the trenches in the second half. The Knights finished with 288 yards rushing, making sure they would not be denied.

Meanwhile, Florida quarterback Emory Jones, who said previously he planned to enter the transfer portal, struggled to make accurate throws to wide-open receivers all night, finishing 14-of-36 for 171 yards. The same mistakes that plagued Florida all year — inconsistency at quarterback, too many penalties and undisciplined play — showed up again in the final game under interim coach Greg Knox.

“I thought our kids played hard but we just couldn’t overcome the mistakes we made,” Knox said. “We made a lot of mistakes as a team — personal fouls, holding penalties, false starts — and we just can’t win big ballgames when you make that amount of mistakes.”

To be sure, UCF is no longer the program that lost the last meeting between the schools 42-0 in 2006. The Knights have won a combined 50 games over the past five years, their most in any five-season span in program history.

And they are headed to the Big 12, eager to join the ranks of the “Big Three” in Florida and to finally have it be known as the “Big Four” once and for all.

“This is just the beginning,” Malzahn said on the television broadcast after the game. “I really believe we’ve got big dreams, we’ve got big goals. We can win the whole thing here. Tonight was just the first step. Recruiting’s going to go really good now.”