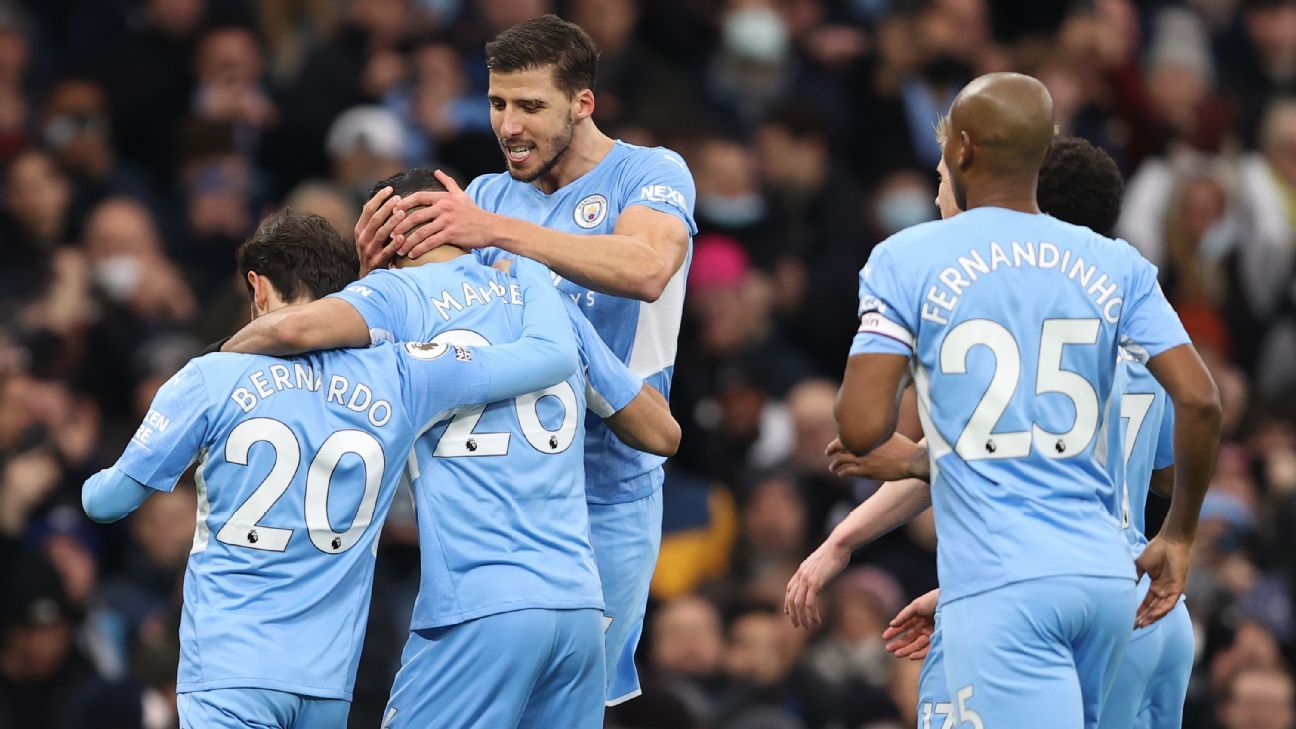 MANCHESTER, England — For the first 25 minutes at the Etihad Stadium on Boxing Day, Manchester City showed why they’re favourites to win the Premier League title again this season. Then, for the opening 20 minutes of the second half, they showed why they might not.

Pep Guardiola’s side barely had to sweat out their Christmas dinner to score four times inside half an hour against Leicester City. Had it not been for two expert saves from Kasper Schmeichel and a couple of near-misses, they could have had eight before half-time.

But then came a reminder that even City are capable of shooting themselves in the foot, and when Leicester scored for a third time in just 10 minutes after the break to make it 4-3, there were some worried faces among the home fans — perhaps remembering that famous 4-4 draw between Newcastle and Arsenal more than a decade ago.

The panic was short-lived thanks to two more City goals to make it 6-3, but over the course of the game they had not been as dominant as the scoreline suggested or, indeed, as Guardiola would have hoped for, particularly after such a fast start.

“It was a roller-coaster, a typical Boxing Day with a lot of goals, for everyone it was an entertaining game,” said Guardiola afterwards. “It was a nice game to watch and three more points. We keep going. The quality of players we have produced this amount of actions to score goals. No manager and tactics can solve it without the quality.

“It was weird. Even at 4-0 in the first half, every time they had the ball they arrived in the final third delivering good passes. They moved a lot of players. They have a lot of quality. They are a master of counter-attacks.”

Leicester, ravaged by illness and injury, can have no complaints about the result, but Guardiola will no doubt be concerned that his team managed to concede 14 shots and eight on target despite having had 72 percent possession. When Kelechi Iheanacho made it 4-3 on 65 minutes — Leicester’s third goal a 10-minute span, City’s vulnerability on the break made it feel almost inevitable they would concede again. They were fortunate Leicester went to sleep at a corner just four minutes later, allowing Aymeric Laporte to head in a fifth and giving the hosts some much-needed breathing space.

Kevin De Bruyne, Ilkay Gundogan and a penalty each from Raheem Sterling — ferociously disputed by Rodgers — and Riyad Mahrez saw City race into a 4-0 lead after just 25 minutes. Rodgers responded at half-time by switching to a back three; James Maddison and Ademola Lookman scored twice in four minutes before Iheanacho turned in the third to give the Leicester fans who didn’t leave early hope they might be witnessing a Christmas miracle, only for City to sort themselves out just in time. Laporte’s header turned the momentum and three minutes from time, Sterling got his second to make it six.

After scoring seven against Leeds and four against Newcastle, City have hit 17 goals in their last three games. These are frightening numbers, especially without a recognised striker, but then some of their defending was scary, too. Liverpool and Chelsea won’t be throwing in the towel just yet.

“Clearly we didn’t make a great start,” admitted Rodgers. “You expect to be up against it. The second goal was nowhere near a penalty. It’s so frustrating. Paul Tierney, the VAR, has missed very physical challenges in the last few weeks, but deems that a penalty. He [Laporte] has fallen over. Before you know it, we’re 4-0 down in the opening 25 minutes.

“At half-time, we said to the players can we win the second half, can we get closer to them? The biggest factor was it was so important not to unravel physically and mentally. They’ve never done that. At 4-0 away, with everyone going against us, it could have been easy for the players to do that. But they didn’t. At 4-3, we’re disappointed with set-pieces.”

Guardiola has such a strong squad that while a number of Premier League teams are struggling to field teams due to the ongoing wave of coronavirus cases and postponements, he could again afford to leave Jack Grealish and Phil Foden on the bench against Leicester, having been left out again at Newcastle as punishment for a disciplinary issue. He has a galaxy of attacking stars to choose from but Leicester’s second-half onslaught — much of it built on swift, efficient counter-attacks — perhaps gave evidence of how important Rodri has become.

The Spanish midfielder was absent and he was a big miss at the base of the midfield. It’s no coincidence that this season City’s win percentage with Rodri in the team is 86 percent. Without him, it drops to 29 percent.

The most important statistic from Guardiola’s point of view, however, will be that despite their brief wobble, City have won nine league games in a row. It is the foundation of the type of run that wins titles. After showing off their best and worst against Leicester, the biggest obstacle to retaining the trophy may be themselves.