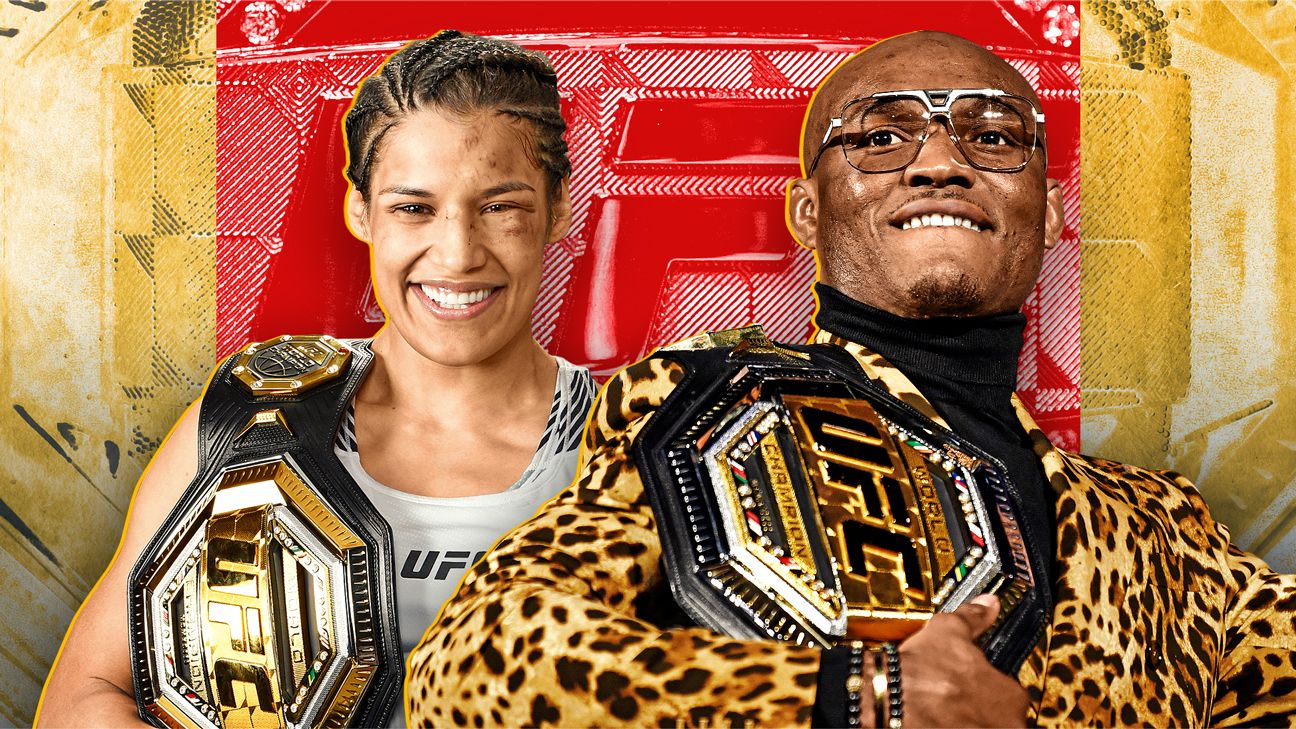 Every year in every sport brings ups and downs, memorable performances, the emergence of new stars. In mixed martial arts, the leading fight promotion, the UFC, has eight weight classes for men and four for women and ran 43 fight cards in 2021, making plenty of room available onstage for athletes to show their stuff. Add in full slates of cards in Bellator and other promotions, and it was indeed an eventful year for MMA.

Who stood out among the year’s many greats? What matchups and performances were most eye-opening? There were a lot of possibilities to consider, and ESPN’s Brett Okamoto, Marc Raimondi and Jeff Wagenheim looked back over the year and came up with the best of the best. They each also cited their most memorable moments of the year.

Chael Sonnen believes if Kamaru Usman takes down Colby Covington next, he may be on his way to reaching the level of Georges St-Pierre in the MMA world.

It was a career-defining year for the UFC’s welterweight champion, one that moved him either ahead of Georges St-Pierre as the greatest 170-pounder of all time or at least on the very cusp of it. The most impressive thing about Usman is not simply his dominance but the improvement he’s showing nearly a decade into his pro MMA career.

Also impressive, for sure, was his activity. It’s become something of a rarity for a UFC champion to fight three times in a calendar year, and Usman had three fights in 2021 in a span of nine months. He defended his title against Gilbert Burns and Colby Covington, who were unquestionably the division’s top contenders this year, and he absolutely buried any doubt about his dominance with a knockout of Jorge Masvidal, whom he had beaten in 2020 but in unspectacular fashion.

Usman did enough to make himself a near-universal pick for the top-ranked pound-for-pound fighter in the world. Regardless of whether you have him ahead of or just behind GSP as the greatest welterweight of all time, there’s no denying that in this current era, Usman feels a lot like St-Pierre in his prime. Usman has distanced himself from the pack. He is the smartest, most skilled, best prepared athlete in the sport.

This award was not decided until the final UFC pay-per-view of the year, UFC 269 in Las Vegas on Dec. 11, when Peña shocked the world by not only beating Amanda Nunes but finishing her — a second-round submission via rear-naked choke. Nunes, regarded as the greatest fighter of all time in women’s MMA, with wins over the likes of Ronda Rousey, Cris Cyborg and Valentina Shevchenko, had won 12 straight and looked virtually invincible.

Peña, though, could not have been less fazed by Nunes’ long list of accomplishments. En route to becoming UFC women’s bantamweight champion, Peña was confident coming in, showing absolutely no fear or intimidation. In the fight’s second round, she essentially walked Nunes down, landing punch after punch until the takedown and submission finish. Peña, who had started the year with a January finish of Sara McMann to earn her title shot, had to be patient for her opportunity while Nunes recovered from a bout with COVID-19. It was surely worth the wait.

Other women had a great year. Shevchenko and Rose Namajunas come to mind. But neither of them stopped the GOAT. Peña did, and that was more than enough to earn this crown.

Fight of the Year: Alexander Volkanovski vs. Brian Ortega (UFC 266)

Championship MMA has reached such a high level that it’s rare you’re going to see a bad title fight. They’re all fantastic to an extent, because they are all examples of the very best the sport has to offer. Even so, September’s UFC featherweight title bout between Volkanovski and Ortega truly had everything you could ever want to see in a martial arts contest.

First and foremost: skill. The sport truly (and finally) began to recognize the depth of Volkanovski’s skill in this fight. He is a world-class pound-for-pound talent, and it showed in this one.

The fighters had heart: Ortega’s ability to fight back from early damage and Volkanovski’s ability to escape dangerous positions against one of the best finishers in the UFC.

It had drama, too, because of those dangerous positions Volkanovski escaped.

Look, we love prefight sound bites. We love storylines. The buildup to this fight took place on a reality TV set. But at the end of the day, what we all want to see most in MMA is fighting at its highest level. And without question, this fight was the best example of that in 2021.

Finish of the Year: Sergio Pettis vs. Kyoji Horiguchi (Bellator 272)

Horiguchi was completely dominating Pettis, the reigning Bellator bantamweight champion, in their Dec. 3 title bout. It looked like the Japanese fighter was about to walk away with the title he once owned. Well into the fourth round, Horiguchi was putting on a sterling performance, picking Pettis apart on the feet and taking him down at will to add some ground-and-pound to the onslaught. Pettis never broke, though, and at 3:24 of the fourth he landed one of the most memorable knockouts in Bellator history.

Pettis pressured Horiguchi toward the cage and went for a right head kick. Horiguchi ducked to stay out of trouble — but Pettis continued spinning. In the very same motion as the kick, Pettis brought his left arm around with a spinning back fist, and it landed right on Horiguchi’s jaw. Horiguchi was out on impact, stiffening before hitting the ground with a thud. Pettis might have lost nearly every moment of the fight until that point, but it did not matter one bit. He had retained his belt via an absolutely stunning knockout.

There were several other great knockouts in 2021 — Jiri Prochazka‘s spinning back elbow KO of Dominick Reyes and Cory Sandhagen‘s flying knee against Frankie Edgar come to mind — but Pettis landed his highlight-reel knockout while down on every scorecard in a main event with a title on the line. It doesn’t get much better than that.

Most memorable MMA moments of 2021

After Namajunas knocked out Zhang Weili with a beautiful head kick in the first round of their strawweight title fight at UFC 261 in April, she was holding back tears and talking with her partner/coach, Pat Barry. The exchange between them, man, it’s inspiring. Just go watch it.

“You the best fighter ever! Who’s the best?”

“You been the best.”


“Never give up on your dreams” were the words gushing into the microphone inside the Octagon.

The speaker was Teixeira and the occasion was the conclusion of the main event of UFC 267 on Oct. 30. But it could have been any fighter following any victory. Perseverance is a common theme among professional mixed martial artists.

However, Teixeira took stick-to-itiveness to a higher level. When he choked out Jan Blachowicz that night to win the light heavyweight championship at age 42, he became the oldest ever to win a UFC belt for the first time. Only two others, Hall of Famer Randy Couture and soon-to-be HOFer Daniel Cormier, have earned UFC titles after turning 40.

And what a rugged, twisting road Teixeira took to the top of the mountain! The burly Brazilian has been a pro fighter since 2002 and has been in the UFC since 2012, his Octagon debut delayed for several years by visa issues. After winning his first five UFC fights to run his overall winning streak to 20 in a row, he challenged Jon Jones for the title in 2014 and got dominated. He was just months away from age 35 at the time. End of story?

Nope. Fifteen fights and seven and a half years later, Teixeira finally got his second chance and showed off what has made him one of the greats all along — as a fighter and as a human. He smartly took down Blachowicz, a dangerous striker, and finished him with a veteran’s efficiency. Then, after his arm was raised and the microphone was put in front of him, Teixeira could not bring himself to make the moment all about himself.

“I love this man,” he said, gesturing toward the crestfallen Blachowicz. “He has my respect forever.”

That is what all but the darkest souls in the MMA world feel about Glover Teixeira. He was just one of seven fighters to win a UFC title this year. But his crowning moment was the only one that made me — a geezer covering the sport as dispassionately as I can — feel emotionally uplifted. Dreams. Never give up on them.

Conor McGregor sitting against the cage with a broken leg

The moment that stands out to me isn’t necessarily a great one, but it’s a moment that will be burned into the psyches of MMA fans for years to come: McGregor, the biggest star in UFC history, sitting against the Octagon fence at UFC 264 on July 10 in Las Vegas with a broken leg and Joe Rogan interviewing him.

Dustin Poirier had just won by doctor’s stoppage TKO when McGregor suffered a tibia and fibula fracture near the end of the first round of their trilogy fight. McGregor, grabbing his leg, continued his trash talk before and during Rogan’s interview. It later became a widespread internet meme due to the surreal nature of the scene — Rogan sitting down against the cage to McGregor’s right, with his microphone in the Irishman’s face. The running joke became that Rogan would interview anyone, anywhere, regardless of the direness of the situation.

McGregor, even while unable to get up and walk, was still hurling expletives and insults at Poirier and his wife, Jolie, who shot him a middle finger during the exchange. For better or for worse, it was extremely memorable.