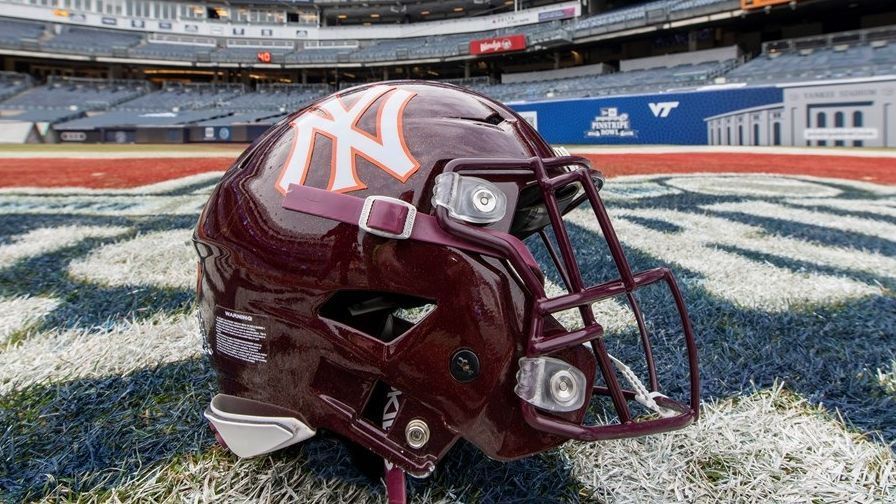 The Virginia Tech Hokies will sport the logo of their hosts, the New York Yankees, for Wednesday’s New Era Pinstripe Bowl (2:15 p.m. ET, ESPN). The 6-6 Hokies will face the 6-6 Maryland Terrapins in the annual bowl game played at Yankee Stadium.

The Hokies won’t be wearing pinstripes, but their helmets will feature the Yankees’ interlocking “NY” logo on one side and Virginia Tech’s usual “VT” logo on the other side.

The uniform addition continues a relationship with the Yankees that dates back to the shooting on Virginia Tech’s campus on April 16, 2007, which killed 33 people, including the shooter. The Yankees donated $1 million to the Hokie Spirit Memorial Fund, which was created at the time to help provide assistance to those affected by the tragedy.

In appreciation to the @Yankees for their longstanding relationship with the #Hokies, as well as the many gestures of compassion that they have extended to @virginia_tech over the years, we are proud to announce a special addition to our helmets for the @PinstripeBowl pic.twitter.com/grEl7DPbgX

The following spring, in March 2008, the Yankees visited the Blacksburg, Virginia, campus and played an exhibition game against Virginia Tech’s baseball team, making good on a promise from then-Yankees owner George Steinbrenner.

“For George Steinbrenner and those guys, and not just the money that them, all the players and the organization donated, but for them to donate their time,” Virginia Tech interim coach J.C. Price said this week, “taking time out of their schedule when they could have been anywhere else but Blacksburg, Virginia, to play a baseball game, that’s what makes our feelings toward the Yankees very special.”

USMNT turn eye to next generation as Brandon Vazquez, Cade Cowell shine in Serbia loss
A’s reportedly reach one-year deal with Aguilar
McIlroy leads by 3 ahead of final day in Dubai
Simmons, Embiid ‘duke it out’ before wild crowd
The secret history of NBA players “walking the dog” — and how Ja Morant perfected it