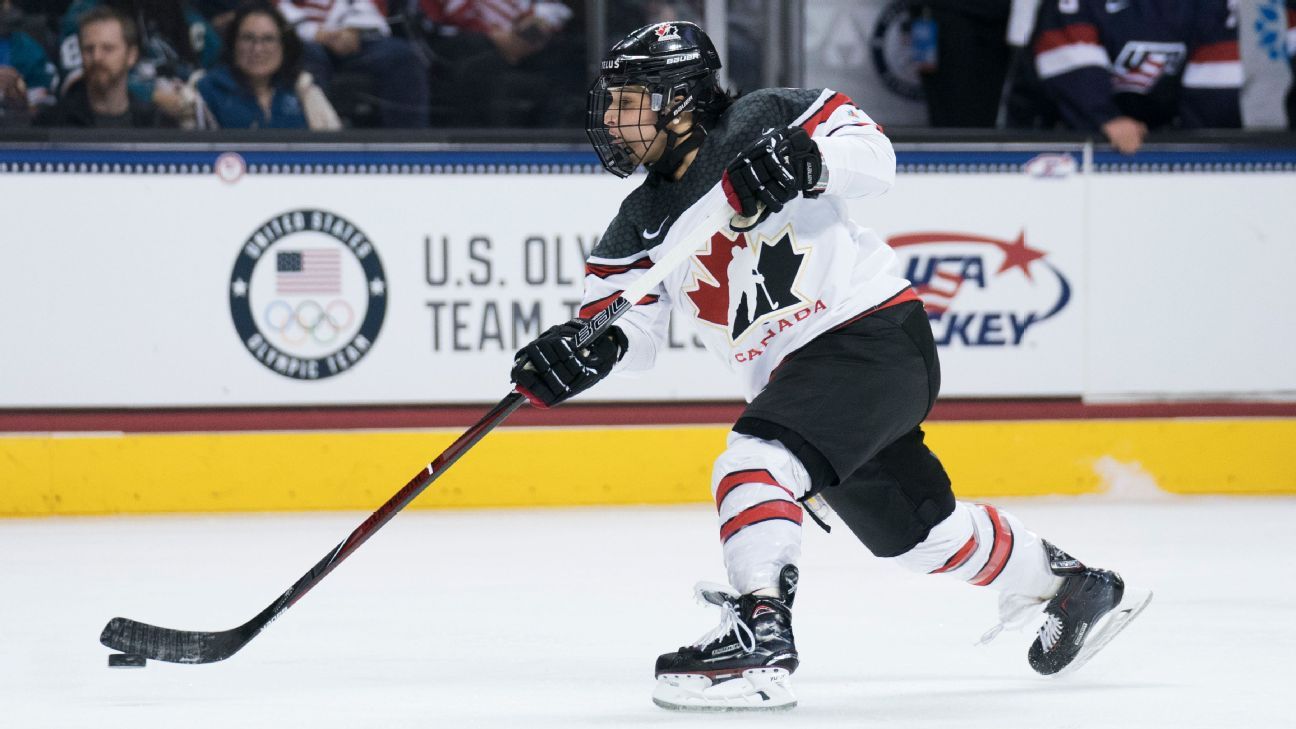 EDMONTON, Alberta — When Brigette Lacquette first heard from the Chicago Blackhawks, she didn’t think the message was real.

It was, and it arrived at a perfect time.

Lacquette became the first Indigenous woman to scout for an NHL team when she was hired by the Blackhawks this year.

Making history is familiar for Lacquette, who became the first First Nations woman to play hockey for Canada in a Winter Olympics in 2018. The defender earned a silver medal but was left off Canada’s Olympic roster for 2022.

“I had to go through some things mentally and emotionally throughout the summer just with everything in life,” Lacquette told The Canadian Press.

“This job has kept me busy and I have something to look forward to and something I want to excel at, get better at every single day and give it my all. It turns out, I really love this job.”

Lacquette saw a seemingly random message on her Facebook page in May from Blackhawks assistant general manager Ryan Stewart, who oversees pro evaluation.

“I had to Google him because, to be honest, I didn’t think it was real,” Lacquette said.

The Blackhawks were looking to replenish their scouting staff after a COVID-19 contraction, Stewart said.

“We were looking for more diverse … just more opinions, more different people to bring into the fold here,” he said. “So doing a lot of research and doing different things, her name just popped up and I kind of dove deeper into it.

“Everybody I reached out to — from former coaches at college to teammates — raved about her hockey sense and her integrity as a person. To me, if you’ve got hockey sense as a player, it translates very well to scouting.”

Lacquette was still awaiting word at that time on whether she would be invited to try out for the 2022 Olympic team.

“I told him I’d let him know next week,” she said. “I thought, ‘That’s actually super cool, like that’s crazy,’ but my mind was focused on playing hockey.

“I didn’t get centralized, and then I inquired more about the job. Talked to higher-ups, and they offered me a job as a pro scout. They told me my job was basically watching all the kids that are drafted in the NHL that play in the Western Hockey League.”

“October was definitely a struggle. I didn’t really know what to expect,” Lacquette said. “I was excited to drive down to Lethbridge and watch a hockey game, but then I was like, ‘What am I looking for?’

“I’ve been playing hockey my entire life, so then watching the game and breaking down aspects of it and the players’ skills and rating them, and writing reports on them, the more I get to watch them, the more I notice that they are improving or not improving.”

Said Stewart: “I’ve been amazed at her reports, and she knows the detail that helps translate a player to a pro level and then obviously bigger than that to the NHL level. She’s grasped that kind of range real quickly here.”

Knowing the tension over sports teams and Indigenous logos and names, Lacquette said she did her homework on Chicago’s logo and Black Hawk, a Thunder Clan leader who resisted the takeover of lands belonging to his people.

“They’re honoring Black Hawk, who is the logo,” Lacquette said. “They do a lot of land acknowledgment stuff and good work with the First Nations communities. They have some stuff on their website they share if people don’t understand.”

Lacquette consulted with her mother, Anita, of the Cote First Nation in Saskatchewan, and her father, Terance, of O-Chi-Chak-Ko-Sipi First Nation in Manitoba, about taking the job.

“My dad was excited. He said, ‘This job is something a lot of people work their whole lives for and don’t get,'” Lacquette said. “With regards to the logo, they do understand. I did explain it to them.

“I do see both sides of it. There’s obviously a lot of people that don’t support it. There was this one girl who made a really big deal about me accepting a job, and saying she doesn’t support me.”

Lacquette was the best qualified person for the job, Stewart said.

“She has an excellent hockey mind, period,” he said. “There’s a long line of people lining up to be scouts, but we hand-pick and we’re very selective as to who could be a scout for us.”

“It’s cool I get to be the first, but I feel like a lot of these kind of jobs and opportunities are going to be opening up a lot for a lot of the other teams in the NHL,” Lacquette said. “I mean, the time is now.”

She scouted the Canadian junior men’s selection camp and played for the PWHPA against the Canadian women at the same arena one December weekend in Calgary.

She’s unsure what her future playing career will be.

“I’m just taking it day by day. I’m not thinking too far ahead,” Lacquette said. “It still feels good to train and skate with the PWHPA.

“I’m not really sure where I’m going to go from here. Right now, I’m focused on my job. It gives me a new goal.”