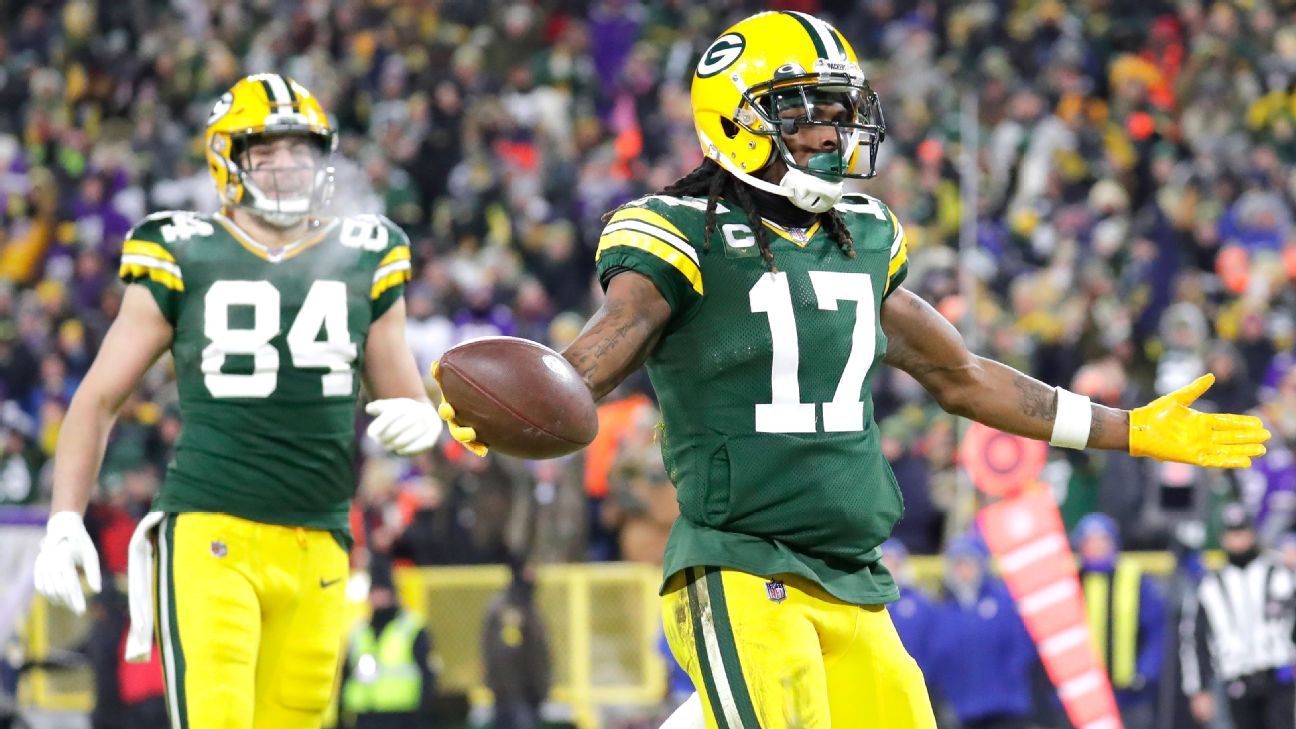 GREEN BAY, Wis. — Matt LaFleur has this regular-season thing all figured out.

Three years with LaFleur as the Green Bay Packers‘ coach, three times they’ve had a first-round bye in the playoffs — including the No. 1 seed each of the past two seasons.

But he has never done this before: His team wrapped it up with a game still left in the regular season.

Before the Packers (13-3) even stepped on Lambeau Field on Sunday night, they knew that a win would make next week’s regular-season finale at Detroit meaningless in terms of their playoff position. They had the Arizona Cardinals, who beat the Dallas Cowboys earlier in the day, to thank for that.

They took care of the rest themselves with a 37-10 win over the Kirk Cousins-less Minnesota Vikings.

The question now is this: Will they do anything more with the top seed than they have the past two postseasons?

Before LaFleur & Co. begin to think about that, they’ll have to decide how to handle Week 18 against the Lions. The past two years, they needed the final weekend of the season to secure their playoff seed.

Now, LaFleur faces the age-old NFL debate: Play the starters in the finale to keep them sharp or give them the weekend off to preserve their health. After the Packers watch wild-card weekend, their first playoff game will be either Jan. 22 or 23 in the divisional round.

“That does seem, for me right now speaking, like a long time,” LaFleur said. “We’ll kinda play it by ear. We’ll have conversations tomorrow certainly with our staff, we’ll definitely have talks with our players and we’ll make the best decision for us. But if you ask me right now, I’d say my gut is that these guys are going to play at least a little bit next week.”

Aaron Rodgers‘ fractured pinkie toe on his left foot no doubt will factor into LaFleur’s decision.

The toe didn’t seem to bother Rodgers on Sunday night even in the bitter cold. It was 11 degrees at kickoff and got colder as the night went on.

“This is a first game that my toe got through the game without any issues,” Rodgers said. “No pregame painkiller shot. I’m feeling good. I’m happy about it. There was definitely a time a few weeks ago when I started to project out and think if we can get the 1-seed, it could be two-plus weeks of rest. I’m going to play next week, and I expect Davante to play and our guys to play. So, we’re looking forward to finishing off the season on a high note and then getting the bye.”

Rodgers, who said this week that he likes it “the colder, the better,” threw for 211 yards in the first half, 118 of them to Davante Adams. It was Rodgers’ highest first-half total since Week 4 of last season and Adams’ highest in a first half since Week 4 of 2019.

The Packers’ halftime lead of 20-3 should have been even bigger but for three failed red zone trips (two field goals and a turnover on downs).

They even ran the ball well, with their second-highest first-half total (88 yards) of the season, thanks in large part to Aaron Jones‘ runs of 27 and 28 yards — the first time in his career he has had multiple 25-plus-yard carries in the same game.

If Rodgers doesn’t play in the finale, his season numbers — in 15 games — will be: 68.6% completion percentage for 3,977 yards and 35 touchdowns with only four interceptions.

And Adams, with 117 catches, broke his own franchise single-season reception record. He’s at 1,498 yards with 11 touchdowns.

He’s 21 yards away from Jordy Nelson’s single-season record and half-jokingly offered that as a reason to play next week.

“I think there’s a lot of good in it,” Adams said. “Having two weeks off is, to each his own but, I wouldn’t want to do that. So I want to play next week at least some. We’ll see the plan we come up with, but I’m planning on — I’m definitely going to prepare to go out there and play at least — well I won’t say ‘at least,’ we’ll see exactly what it’s looking like, but I want to get out there and run around a little bit for sure.”

It wasn’t much of a test for the Packers’ defense, considering it was journeyman Sean Mannion — and not Cousins due to COVID-19 — in charge of the Vikings’ offense.

It also gives voters an extra week to consider LaFleur for Coach of the Year. He didn’t win in either of his first two seasons, but a third straight 13-win season — and a 39-9 record in three seasons — might be too hard to ignore this time around. No coach in NFL history has won more games in his first three seasons.

And the Packers are now the first team in NFL history with three consecutive seasons with at least 13 wins.

All in a season that started with that unsightly 38-3 loss to the New Orleans Saints — a game Rodgers downplayed by saying afterward it was “just one game.”

And the Packers needed only 15 of them to show they’re the NFC’s best heading into the playoffs.

Johnson, Rockenfeller, Button get Le Mans seats
Bolts win 11th straight at home, end Bruins’ run
Maple Leafs’ Murray (ankle) out through bye week
Who will go to the Super Bowl? Our guide — including picks — for 49ers-Eagles, Bengals-Chiefs
Mikheyev to have surgery; played with torn ACL