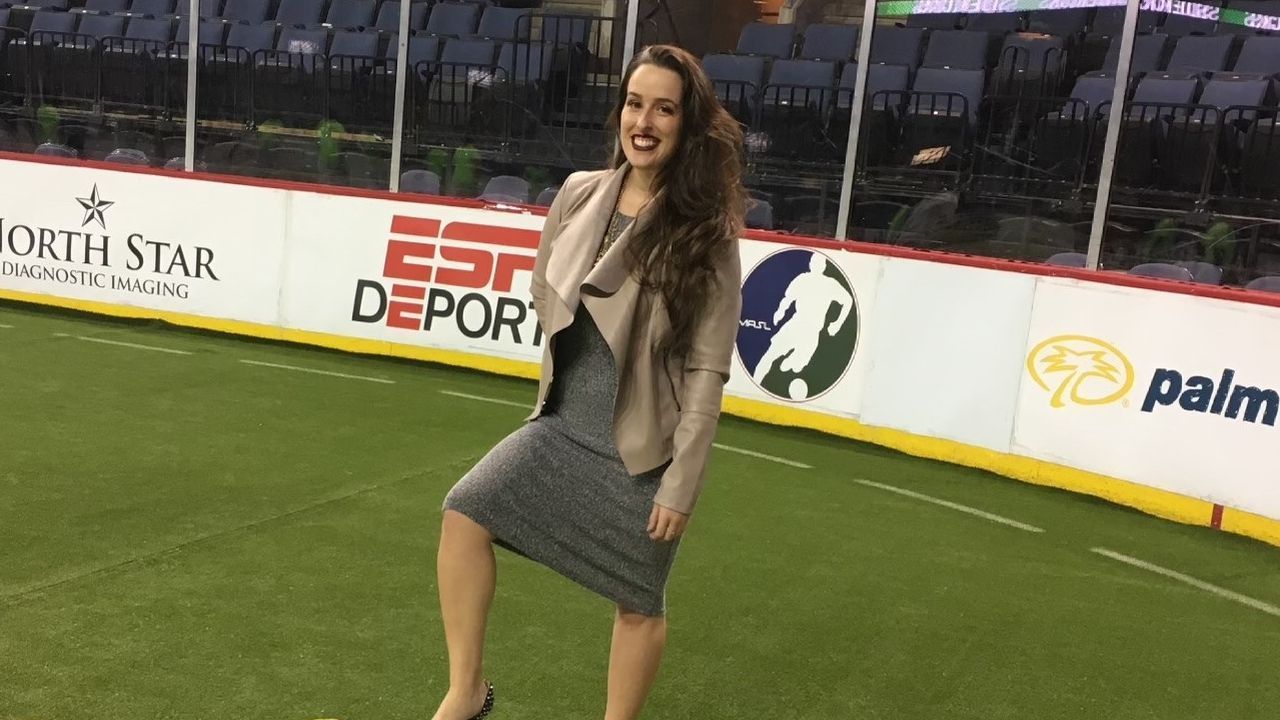 The players’ association of the Premier Hockey Federation had high expectations for its next executive director.

Fortunately for attorney Alex Sinatra, whom the PHF has tapped to fill that vacant post, its requirements didn’t include any actual hockey-related skills.

“They assured me that not having played hockey and me not knowing how to skate is not going to hinder me from doing a fabulous job at this position,” Sinatra told ESPN last week ahead of her formal announcement as executive director. “I am not of the hockey world. I love hockey, I love watching hockey, but I’ve never played hockey. So, I’m coming into this with a background that these players don’t have. They’re the professionals on the ice, and I’m the professional when it comes to building businesses, marketing and the law.”

Sinatra might be new to the hockey sphere, but she’s hardly a sports neophyte.

Growing up, Sinatra was a competitive gymnast with Olympic aspirations before a major injury derailed her dream. The experience had her considering a career in pediatric orthopedic surgery, but ultimately it was business — not science — that had her heart.

Sinatra decided then she would attend law school to become the next superagent, a la Jerry Maguire. But Sinatra quickly found the agency side wasn’t for her, triggering an existential crisis of what to do with this degree she was in the process of earning.

The answer was pivoting to sports law. Armed with a bachelor’s of business administration in marketing from Texas A&M and a JD from Texas A&M University School of Law, Sinatra passed the bar on her first try and began building an impressive résumé.

To date, Sinatra has been in-house counsel for multinational companies and a family that owns several sports teams, has written for USA Today’s NFL Wire, worked for a professional indoor soccer team and created her own consulting firm that helps women and minorities in sports industries grow their business.

That last endeavor introduced Sinatra to Mallory Souliotis, a defender for the PHF’s Boston Pride. They had known each other for about a year when Souliotis first approached Sinatra about the PA’s executive director gig late in 2021. Anya Packer had held the position since 2017 but departed to become general manager of the PHF’s Metropolitan Riveters. Souliotis thought Sinatra would be a great fit to succeed Packer, and Sinatra was immediately intrigued. After meeting with more PHF members, Sinatra quickly found a deeply invested group committed to long-haul changes.

“I’ve been around pro athletes my whole life, and the amount of organization that these ladies showed has been unmatched, unparalleled,” Sinatra said. “They were able to get a representative from every single team on the phone with me to have a two-hour long conversation about where they see the players’ association going, and how I can fit into that. They asked very pointed questions of me. They asked where I see the league this season, where I see the league and the players’ association in a year. That showed me that they were really dedicated, and they had an extremely strong tie-in to creating something very special and long term for the sport of women’s hockey. That really sold me.”

The next step for Sinatra was educating herself on the major issues women’s hockey is facing. She describes doing research as far back as the 1800s, when women first suited up in Canadian-based leagues and charting the evolution of the men’s game alongside the women.

That brought her to those more modern hurdles, in particular the potential for a unified women’s hockey league in North America. Right now, there are two main entities — the PHF and the Professional Women’s Hockey Players Association (PWHPA). The six-team PHF — which rebranded from the National Women’s Hockey League ahead of the 2021-22 season — has players across five U.S.-based clubs and one outpost in Toronto. The PWHPA was formed when the Canadian Women’s League collapsed in 2019, by a large swath of U.S. and Canadian players who opted not to join the then-NWHL. Rather than traditional teams, the PWHPA has hubs — three in Canada, two in the U.S. — and they play tournament games around the continent.

Reconciliation has been a goal across the board, but the leagues currently operate under two different business models. The PHF has player salaries and doubled its cap to $300,000 for last season to allow an average salary of $15,000 on 20-person rosters. Plus, there’s additional bonuses from the league’s revenue-sharing agreement. PHF commissioner Tyler Tumminia said in 2021 that while the COVID-19 pandemic had challenged their league, there were still inroads made with major sponsorship deals.

The PWHPA doesn’t pay its players in salaries; instead, they are eligible to win a share of $1 million in prize money via team success in the league’s Dream Gap tour. And each of their hubs has a naming sponsor. PWHPA commissioner Jayna Hefford has long said that the PWHPA is looking to have health benefits, a living wage and proper infrastructure in place to move forward with a unified league.

Currently the PHF doesn’t offer full health benefits to players, although their medical costs due to injury are covered. Sinatra said she hopes to speak as much as possible with the PWHPA representatives about their issues, and would be a sounding board for any PWHPA members that had questions about the sport’s future.

Cast your vote to determine the captain for each division’s team for the 2022 NHL All-Star Weekend in Las Vegas. Fans can submit up to 10 ballots per day at NHL.com and via the NHL app.

Sinatra’s focus will be on prioritizing what the PHF players want, and helping them achieve those goals.

“I would say there are three main [wants] to start,” Sinatra said. “First is an increased amount of ability to make decisions for the league. They do not feel like they have been given the opportunity to make a meaningful impact on how the league is being formed, the sponsors that are coming in, rules that are being created, policies, procedures. They want to have a much more hands-on role. Then secondly, they want to have upgraded standard player contracts. It’s phenomenal that they are employees and have a salary, but they want the contract to be a little more player-friendly, and they really want there to be, as any professional athlete wants, a living wage. And the third thing is more visibility and resources for the game. 96% of [media] coverage goes to sports where men are playing, 4% of coverage goes to sports where women are playing. So they’re really trying to see that shift and have people understand that the resources need to be equitable.”

There’s always the possibility that the PHF will unionize its members and generate more bargaining power that way too. Sinatra has discussed that already with the players, but cautioned there is “a very specific time that you should unionize” and it’s not something to be done in haste.

If Sinatra’s to-do list already seems jam-packed, well, it is. And those who know Sinatra best say she’s the woman you’d want tackling these types of challenges.

Casey Drillette, a project manager who runs her own education company, met Sinatra when they were in eighth grade. She’s seen Sinatra in her element and suggests no one doubt her ability to exact real change for the PHF.

“I would say, sit down and take notes,” Drillette said. “Just give Alex a little bit of time to get to work and things are going to happen. I’m always impressed at how Alex takes things and is able to actually make progress and take action. Like a lot of people talk a great game, and say, ‘I have all these ideas, these are some great thoughts we have.’ And Alex is always like, ‘no, that’s good; we’re implementing right now. Let’s do it.’ That’s who she is. When Alex told me about this [PHF] opportunity, it just really hit me that everything she’s done up to this point has culminated in this. That to me was really cool, seeing all the different parts of her life come together to make her the perfect candidate for this position.”

Part of Sinatra’s strategy to start will be differentiating between players’ needs and wants, and then classifying their short-, middle- and long-term goals. After that, it’s full steam ahead.

“Do I believe that an upgraded standard player contract can be negotiated for next season? I do,” Sinatra said. “Good employees deserve to be treated like good employees and have upgrades in their employment contracts. We also don’t have a website right now, so I can see that [happening]. I can see us potentially offering products for fans to purchase on the player side. I can also see potentially [negotiating to] bring in some sponsors on the player’s side as well. I can see us starting to build a nest egg for these players.”

The other thing Sinatra wants to see changed is the perception that women’s hockey is somehow lesser than the NHL product on display. Much of her career has been devoted to advocating for women’s sports, and Sinatra wants the PHF to be appreciated for what is it, not what it’s constantly compared to.

“People say things like, ‘oh, women’s hockey is not as entertaining and they don’t have any revenue,'” said Sinatra. “My response is, if you’ve been allocating resources inequitably for so long, of course there’s going to be a difference in economics. And the women were told, ‘OK, we want you to be the same product as the NHL,’ and the women must come back and say, ‘we’re a different product.’ Some people in the industry have such an inherently ingrained bias against sports where women are playing that they don’t even recognize some of the decisions they’re making are based upon gender inequity. Once we start having conversations around that, the people who are inequitably allocating resources [can] recognize the choices are about gender, and not about the quality of the product. Because anyone who has watched women’s hockey knows it’s a quality product.”

Suffice it to say, Sinatra is eager to officially get started. When she does, those in her path better be prepared to do battle.

“Alex is definitely fierce. I would use that word,” Drillette said. “I would never want to negotiate with her. I try not to argue with her. She just has this really strong moral compass. She’s very ethical and she’s really good about sticking to her morals. If something doesn’t sit right with her morally or ethically she will stand up for that and that is something that just won’t get past her.”