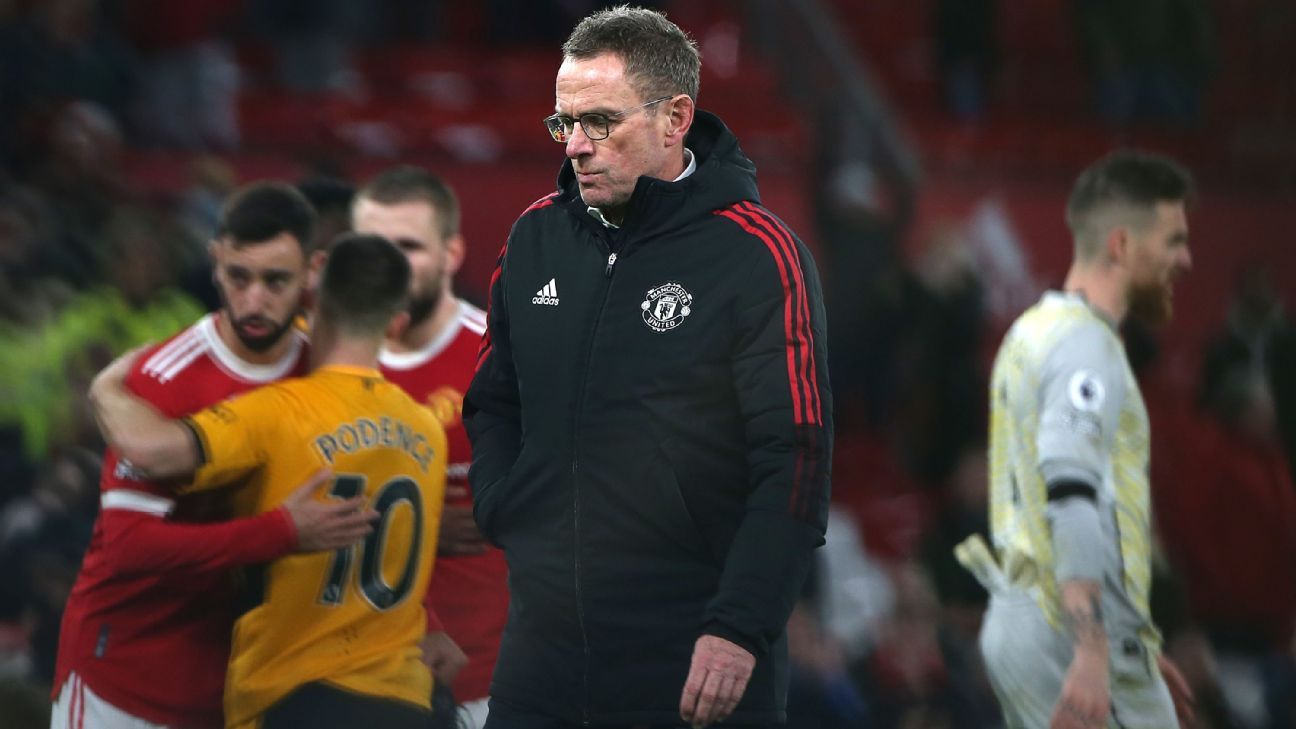 There are two ways that a manager can impress the players when he walks into a new dressing room for the first time, but Ralf Rangnick is failing on both fronts as he grapples with the challenges as interim boss at Manchester United.

Rangnick either has to walk in as a proven winner, somebody whose reputation goes before him, or make his mark on the training ground and with his tactical acumen. Six games into Rangnick’s spell in charge, there has been precious little sign of the so-called “new manager bounce.”

Three wins, two draws and most recently a 1-0 defeat against Wolves at Old Trafford on Monday are the unimpressive statistics, but there has also been a worrying inability to motivate a group of highly talented players into a functioning unit.

Add in the candid comments of United defender Luke Shaw, who spoke of a lack of togetherness within the squad before adding, “maybe the manager can bring some more ideas of what he wants on the pitch.” It’s clear that Rangnick is already under pressure to raise his game as much as he is to raise performances from the players.

The players, of course, will bear the brunt of criticism, and United’s have underperformed for so long now that it is inevitable they will continue to be scrutinised. But the players need to be inspired and motivated, so all eyes are now on Rangnick to react.

Footballers, no matter which level they play at, don’t take long to make up their minds about a new boss. One former player, a multiple title winner, told ESPN that the first 15 seconds of a new manager’s introductory message is enough for most players to decide whether he is the real deal or “just another salesman who talks a better game than he delivers.”

Fifteen seconds is perhaps pushing it to extremes, but footballers largely want their manager to improve them, keep them focused and, most important of all, make them win, so any doubt over their boss’ credentials can only damage the prospects of success.

If a manager doesn’t have trophy-winning credentials on his CV, he has to make a difference with his tactical approach, which enables him to quickly make the team better and improve players on an individual basis. But after just six weeks in charge at United, Rangnick is struggling with the latter having been unable to win over the doubters with his reputation.

One source close to a prominent member of United’s first-team squad told ESPN that the player “had to Google” Rangnick when his appointment was confirmed at the end of November. That’s not necessarily an indictment of the player because, while many fans or bloggers might know Rangnick’s career path in intimate detail, footballers are largely only focused on the day-to-day of training and playing and not so inclined to study the movers and shakers in the game beyond their own sphere.

Had United appointed Antonio Conte, Zinedine Zidane, Mauricio Pochettino or Brendan Rodgers — all of whom were discussed by the United board around the time of Ole Gunnar Solskjaer’s departure — none of the players would have had to Google the new man.

Having researched Rangnick’s background, the United players would soon have found a coach who has done well developing teams and players at the midrange level of the game in Germany with clubs such as Schalke 04, TSG Hoffenheim and RB Leipzig, but hasn’t coached a top club or won a major trophy. On that basis, Rangnick had to make a swift impression with his tactical nous, but after six games in charge — a run disrupted by a COVID-19 outbreak at United — it has been anything but convincing.

Tactically, United have tried to press high up the pitch in some games and noticeably failed to do it in others. Against Newcastle and Wolves, they started with a 4-2-2-2 formation which led to two woeful first-half performances before changes were made at half-time. Against Wolves on Monday, United were overrun in midfield before switching from 4-2-2-2 to 3-5-2, which only marginally stemmed the tide before Bruno Lage’s team sealed victory with a late Joao Moutinho goal.

When a manager’s tactical plan fails to work, it leads to doubt and confusion among the players. The manager is supposed to bring clarity, but Rangnick has fallen short in that area so far.

After Solskjaer was criticised for leaving the players under-coached by a backroom team largely populated with former United players or staff who had worked with him at Cardiff City and Molde, Rangnick has gambled on his credibility by hiring two coaches — Chris Armas and Ewan Sharp — whose previous experience was limited to spells in MLS with New York Red Bulls and Toronto FC.

A source told ESPN that some players have been underwhelmed by Rangnick’s early impact, on the pitch and with his recruitment, but that he also needs time to overcome a disrupted December in order to assert himself in the job.

Yet the early momentum that all new coaches want — and need — has pretty much gone before it even arrived for Rangnick. From this point on, he is battling for results and credibility. That is never a good place for a manager to be in.

Sizzling Rahm targets PGA Tour trifecta at Torrey
Interim U.S. boss Hudson: ‘Not a nice situation’
What’s next for the UFC flyweights and new champion Brandon Moreno?
‘You only fight him because you have to’: Why nobody wants to get into the ring with light heavyweight champion Artur Beterbiev
Flightline run away winner at Eclipse Awards