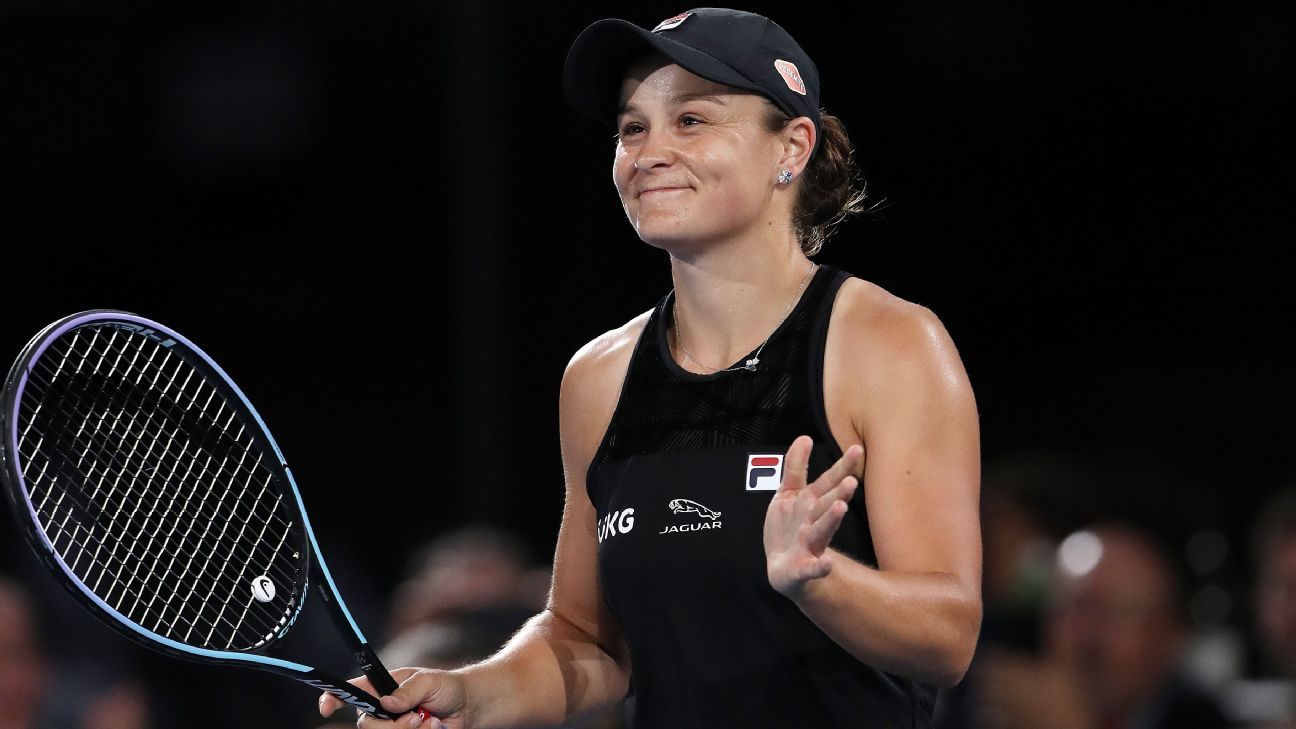 ADELAIDE, Australia — Top-ranked Ash Barty had a tough opener to her 2022 season, having to rally from a set and a break down to beat 17-year-old American Coco Gauff 4-6, 7-5, 6-1 on Wednesday in the second round of the Adelaide International.

The Wimbledon champion dropped serve twice in the first set and was 4-2 down in the second before recovering to win 11 of the last 13 games.

A two-time major winner, Barty is aiming to be the first Australian woman to win her home major since Chris O’Neil in 1978.

Barty reached the Australian Open semifinals in 2020 and the quarterfinals in 2019 and last year.

She had a bye in the first round at Adelaide, one of the main tune-up tournaments for the Australian Open which starts Jan. 17.

The second and third seeds didn’t survive the second round.

Sabalenka, a semifinalist at Wimbledon and the U.S. Open last year, wasted a set point as she struggled with her serve in the tiebreaker. She then had 11 double-faults in the second set to give her 18 in total for the match.

The win was Juvan’s first against a Top 10 player and earned her a spot in the quarterfinals.

“I was a little bit scared at first because she’s incredible and she has done so many things really, really well,” Juvan said. “But on the other hand, it’s the start of the season, it depends on the day a little bit, and I really believed that I could do it.”

Rogers had to recover quickly after she led by a set and a break and then lost seven straight games to Sakkari.

“It’s nice to start with a big win like that,” Rogers said. “She’s coming off an incredible season last year and she’s such a great competitor. So I knew I had to bring my best tennis, whatever that looks like at the beginning of the year.”

Rogers will face seventh-seeded Elena Rybakina in the quarterfinals.

Travel restrictions during the COVID-19 pandemic mean there’s a crammed schedule of tournaments before the Australian Open.

The WTA 500 event in Adelaide is one of three women’s tournaments this week, including two in the so-called Summer Set in Melbourne.

In the Summer Set 2 tournament, 2017 U.S. Open finalist Madison Keys had a 6-3, 7-6 (2) win over Harriet Dart to move into a quarterfinal match against third-seeded Daria Kasatkina.

The main men’s event this week is the 16-team ATP Cup in Sydney, with Daniil Medvedev aiming to help Russia defend its title. Rafael Nadal is playing in a tune-up tournament in Melbourne.

After months of uncertainty, No. 1-ranked Novak Djokovic confirmed he’d received a medical exemption from Australia’s strict COVID-19 vaccine requirements and he was heading to Melbourne in a bid to defend his Australian Open title.

Wyshynski: Celebrating Ryan Hartman and other NHL ‘glue guys’
Brown hired by Astros as MLB’s only Black GM
‘When he hits you, it’s different’: What it’s like facing the KO power of Derrick Lewis
‘You only fight him because you have to’: Why nobody wants to get into the ring with light heavyweight champion Artur Beterbiev
LeBron, Giannis voted as All-Star Game captains