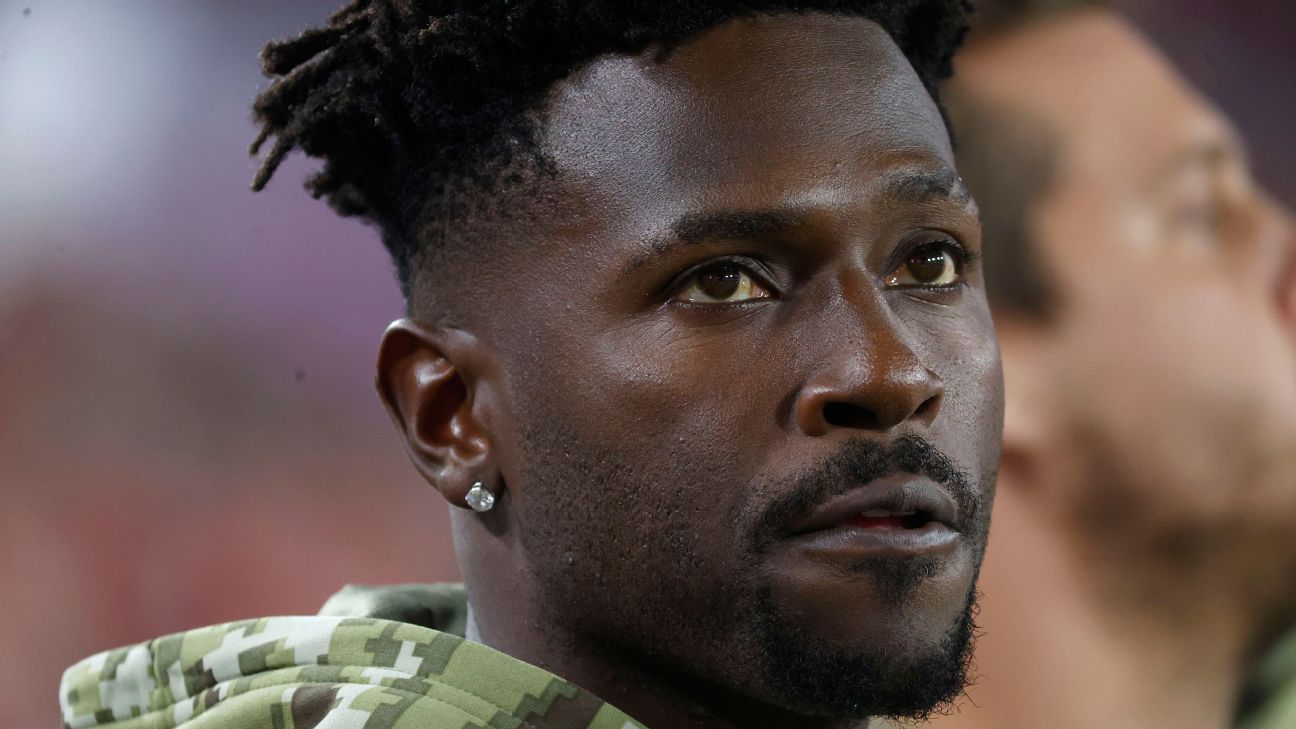 Four days after wide receiver Antonio Brown threw off his helmet and dashed off the field in the middle of a game against the New York Jets, the Tampa Bay Buccaneers have terminated his contract, effective immediately, the team announced Thursday.

“While Antonio did receive treatment on his ankle and was listed on the injury report the week leading up to last Sunday’s game, he was cleared to play by our medical team prior to the start of the game and at no point during the game did he indicate to our medical personnel that he could not play.

“We have attempted, multiple times throughout this week, to schedule an evaluation by an outside orthopedic specialist, yet Antonio has not complied. Maintaining the health and wellness of our players is of the utmost importance to our organization.”

Brown and his attorney Sean Burstyn said Wednesday that he told the Buccaneers he was too hurt to continue playing on an injured ankle, while coach Bruce Arians rebutted having any knowledge to the nature of his outburst, nor did he say Brown communicated to him or to the training staff that his ankle was bothering him.

A Bucs team official, however, told ESPN that Brown was agitated at halftime of Sunday’s game against the New York Jets about not getting the targets he was expecting and he had to be calmed down.

Brown’s attorney said the receiver’s ankle injury, and not targets, was the source of Brown’s frustration.

Bucs general manager Jason Licht told ESPN on Thursday that Brown and his agent requested last week that the remaining $2 million in contract incentives for this season be guaranteed, and the team declined that request.

In a statement issued Wednesday, Brown said he was forced to play on an injured ankle that will require surgery, which is why he exited Sunday’s game so abruptly in the third quarter.

An NFL spokesperson told ESPN on Thursday that Brown would not be subject to league discipline for his actions during Sunday’s game.

Upset on the sideline, Brown, who had been on the field for 26 plays, took off his jersey, pads and undershirt, and he threw his shirt and gloves into the stands. He then dashed across the end zone while both teams were on the field and waved to fans as he went to the locker room.

He accused the Buccaneers of mischaracterizing his outburst on the field as a “mental health issue” rather than a refusal to play due to pain.

Licht said Brown did not tell anyone on the Bucs medical staff on Sunday about his ankle bothering him before the game or during it.

Dec. 2018: Deactivated for Steelers’ Week 17 game after reportedly throwing a ball at a teammate in practice
Feb. 2019: Meets with Steelers owner Art Rooney II, says both sides agree to move on
March 2019: Traded by Steelers to Raiders for 3rd- and 5th-round picks
July 2019: Placed on non-football injury list (frostbite on feet from cryotherapy)
Aug. 2019: Missed Raiders training camp practices due to helmet grievances
Sept. 7, 2019: Released from Raiders after Instagram post asking for his release
Sept. 9, 2019: Signed 1-year deal worth up to $15M with Patriots
Sept. 10-16, 2019: Ex-trainer Britney Taylor accuses Brown of sexual assault. Sports Illustrated reports 2nd incident of sexual misconduct
Sept. 20, 2019: Released by Patriots
Jan. 22, 2020: Charged with felony burglary with battery and 2 misdemeanors for incident with moving truck company. Pleaded no contest and did not receive jail time
July 31, 2020: Suspended 8 games for multiple violations of NFL’s personal conduct policy
Oct. 27, 2020: Signed 1-year contract with Buccaneers
Feb. 7, 2021: Caught 5 passes, including a TD, as the Buccaneers won Super Bowl LV
May 25, 2021: Re-signed with Buccaneers
Dec. 2, 2021: Suspended 3 games for violating NFL-NFLPA COVID-19 protocols. The league and players’ union found that Brown was among three players who misrepresented their vaccination statuses
Jan. 2, 2022: Took equipment off and runs off field during game at Jets. Coach Bruce Arians said, “He is no longer a Buc”
Jan. 5, 2022: Says Bucs tried to make him play through ankle injury, which is why he abruptly left Jets game

Licht said the Buccaneers made “reasonable accommodations” to bring this matter to a close early this week, if in fact Brown had an injury from the game and the wide receiver declined to cooperate.

Brown on Wednesday said that he underwent an MRI Monday, revealing broken bone fragments, a ligament torn from the bone and cartilage loss. He also said the Bucs tried to send him to a “junior doctor,” versus the two he sought in New York City, including Dr. Martin O’Malley at Hospital for Special Surgery, where he had scheduled surgery. He claims the Bucs gave him a “few hours’ notice to show up “and “ordered him under penalty of discipline.”

Licht told ESPN that the Bucs made two doctors’ appointments in New York for Brown so they could place him on injured reserve and pay him for the remainder of the year, and he missed both appointments. The team still could have put him on injured reserve if Brown sent over his medical records, but he did not return their texts and calls, Licht said.

Licht said the Bucs also could have set up those appointments in Tampa, but they knew Brown was in New York and they believed they were trying to oblige him. Brown and his agent declined to send the Bucs his medical information from their doctor visit this week, Licht said, and he still has not returned the team’s calls.

On Thursday morning, Brown posted screenshots to social media of alleged text exchanges with Arians from Thursday, Dec. 30, and Friday about the status of his ankle, captioned on Instagram with, “Coach said we never talked.”

In another post, Brown said none of his teammates knew about the alleged discussion with Arians.

“Don’t get it twisted. My brothers have been good to me. From Tom [Brady] to practice squad, we were a top-level unit,” Brown posted to Twitter. “They have been good to me and knew nothing about my talks with coach last week. The team mishandled this situation. They let me down and, more importantly, my teammates.”

He also posted a grievance Thursday about a deal with Brady’s trainer Alex Guerrero and tagged Brady in the posts, saying, “@TomBrady guy @ag_TB12 charging $100K never doing the work on me! how u even work wit people like this! This is what I was dealing wit.” He posted something similar on Twitter, which he later took down, with, “… must be was apart of these guys plans all Along.”

Brown first suffered the ankle injury in Week 6 and missed five games. He then was suspended for three games after an NFL investigation found that he produced a fake COVID-19 vaccination card.

He returned in Week 15 against the Carolina Panthers, catching 10 passes for 101 receiving yards. But he also aggravated the injury, and as a result, he was a nonparticipant in Thursday and Friday practices last week and was officially questionable leading into the Jets game.

Arians was not at those practices because he was quarantining at home after testing positive for COVID-19, but he was kept abreast of all practices and player statuses.