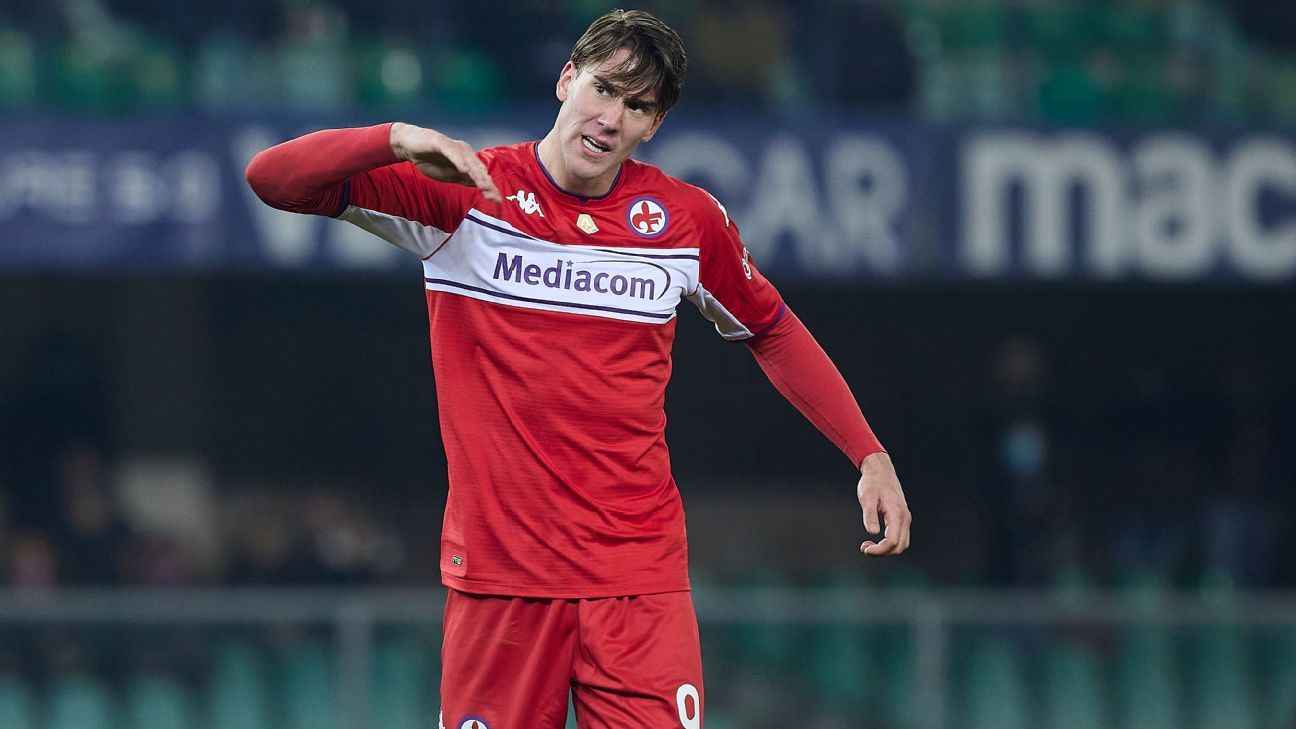 While most headlines are focused on the futures of Borussia Dortmund‘s Erling Haaland and Paris Saint-Germain‘s Kylian Mbappe, it’s Fiorentina striker Dusan Vlahovic — Serie A’s top scorer this season with 16 goals — who has emerged as the most coveted player of the January transfer window.

Always a player with high potential, the Serbia international was signed from FK Partizan for around €2 million when he turned 18 on Jan. 28, 2017, and netted 20 goals from 22 games for Fiorentina’s Primavera side before graduating to the first team in 2019-20.

With 21 goals in 37 Serie A games last season, Vlahovic’s progress has been so remarkable over the past year that he seems to be getting better on a month-by-month basis. He is now starting to look like a complete centre-forward and is not far off being mentioned in the same breath as his two world-class peers.

Until this season, Vlahovic predominantly played in a deep-sitting Fiorentina side where, especially under former coach Beppe Iachini, he was often left to chase shadows. Even once he got hold of the ball, there would often be 40-50 meters left to negotiate his way past multiple defenders, or hold on to the ball to win a free kick or lay it off.

This season, however, under Vincenzo Italiano, Vlahovic has prospered in a far more proactive and aggressive side in which many of his goals have come after possession has been regained from successful pressure high up the pitch. In the calendar year of 2021 he scored 41 goals from 56 games in all competitions from an average of 2.8 shots per game, while an xG of 10.4 for 16 Serie A goals this season is also worth noting.

Having already rebuffed repeated attempts to extend his contract, which expires in 2023, Vlahovic, who turns 22 at the end of the month, looks set to depart. But with every top club in Europe after him, and a potential transfer fee of €80m to consider, which club would suit the free-scoring Fiorentina star? ESPN has assessed the moves open to him.

Given the level of interest in the player, it’s hardly surprising that Arsenal would want to make an audacious attempt to land Vlahovic this month, especially as the top clubs who don’t manage to land Haaland once his €75m release clause becomes active are likely to have the Serbian next on their radar, should he still be available in the summer. Though Edu, Arsenal’s sporting director, may not have the lure of the Champions League to offer yet, the club are in a better place to qualify for the competition this season after two consecutive eighth-place finishes.

From a technical viewpoint, Vlahovic would add a new dimension to Mikel Arteta’s front line, as he likes dropping deep to get hold of the ball, creating space in front of the centre-backs, and is adept at flicks and layoffs with his preferred left foot.

The 6-foot-3 striker would also add more physical presence in the box. Arsenal are among the best crossers of the ball in the Premier League, so with a more consistent supply in central areas, one can assume Vlahovic would thrive.

Long considered the front-runners to sign Vlahovic, as they were already scouting him heavily before his major breakthrough last season, a move to Turin now seems less likely. Juventus have to grapple with tight financial controls and need to move players like Dejan Kulusevski and Aaron Ramsey on before they can compete for new arrivals in Vlahovic’s price range. In fact, Juve’s only real chance of landing him is to wait until 2023 to get him on a free transfer, or somehow persuade Fiorentina to let him leave on loan with an obligation to sign him permanently as they did with winger Federico Chiesa.

That said, staying in Italy is reported to be an option that Vlahovic is keen to consider. He has adapted well on and off the pitch and, in such a case, Juventus certainly look the most viable destination. Having studied the player for months on end, Juve would have a clear plan in mind for his future and, with Alvaro Morata likely to depart after his loan spell from Atletico Madrid ends in the summer (or even possibly before then), there’s clearly room to fit in a genuine “No. 9,” even with Moise Kean‘s two-year loan from Everton containing a €28m obligation to sign him permanently in 2023.

As well as being notoriously tight-lipped about his targets, manager Pep Guardiola’s preferences can be tough to predict. Assuming that the City boss is keen to sign a centre-forward at all, given some previous comments in his news conferences, Vlahovic should feature highly on a list that likely includes Haaland and perhaps even still Tottenham’s Harry Kane (though Spurs’ demands for £150m seem to have scuppered any chance of that deal).

In the event that Haaland heads elsewhere, it begs the question whether Vlahovic is already at the level required for what is possibly the best side in world football right now. Some sources I spoke to certainly think so, but City’s recent teams have thrived with quick, mobile forwards like Sergio Aguero and David Silva, which suggests a different profile of player to the Serbian.

On one hand there’s little to suggest that his fine hold-up game, excellent finishing and heading technique wouldn’t thrive in a team that dominates the opposition, but the notoriously picky Manchester City hierarchy might still see some shortcomings in terms of creativity and overall technical ability.

Another club who have Haaland ahead of Vlahovic on their wish list, United’s two main centre-forwards — Edinson Cavani and Cristiano Ronaldo — turn 35 and 37 next month, while Marcus Rashford and Mason Greenwood (neither of whom are out-and-out No. 9s anyway) are still looking to find the net consistently this season, and Anthony Martial is keen to depart for more game time.

With interim manager Ralf Rangnick a big fan of Haaland, sources have told ESPN that United have made the Norway international their top target for next summer. But it’s not certain they will get him and Vlahovic fits the technical profile of an ideal upgrade for the Manchester United attack, even if he may end up being more expensive than their first-choice option. If more spending is on the agenda, then landing him would go down as one of the more sensible acquisitions seen at Old Trafford over the past few years.

According to reports, Newcastle had been one of the first Premier League clubs to sound out the Serie A top scorer. But Vlahovic has moved beyond the point of being a target for anything but the top clubs in Europe, let alone signing up for a relegation battle — never mind how exciting the Newcastle project may look a year or two down the line with their new Saudi-backed owners,

Newcastle deserve praise for setting a high bar and being quick off the mark to register their interest, but Vlahovic won’t be heading to St James’ Park in this transfer window, or any other for that matter.

With sources close to the player citing that “money will not necessarily be the decisive factor” when deciding his future, the prospect of staying in Florence for another six months or even a year does still seem like the most valid scenario.

The prospects of grabbing an unexpected Champions League spot may have recently faded as the club sit seventh in Serie A, nine points off fourth-placed Atalanta, but European football next season at Artemio Franchi is still a possibility. Regardless of their final position, Vlahovic extending his contract with Fiorentina seems to be off the table despite numerous attempts from the club, so it’s only a matter of time before he moves.

Despite a recent slump in form, Fiorentina are a much-improved side under Italiano’s guidance and, with Serbia already qualified for the 2022 World Cup, there are enough challenges ahead for the young player not to feel he is stagnating.

On the evidence of the last six months, Vlahovic is in good hands with Italiano and even staying at the club until his contract expires won’t do his continued progress any harm. He may well decide it is best to take some time and think about his future carefully, rather than rushing into a decision this January.

However, there will come a time — and this may be in the summer — where Fiorentina will have to start planning for a future without their best player. They have already landed a replacement of sorts by signing Poland international striker Krzysztof Piatek on loan from Hertha Berlin for the rest of the season, but this year’s transfer windows will be the last chance for the club to cash in on Vlahovic before his transfer value starts to decrease.