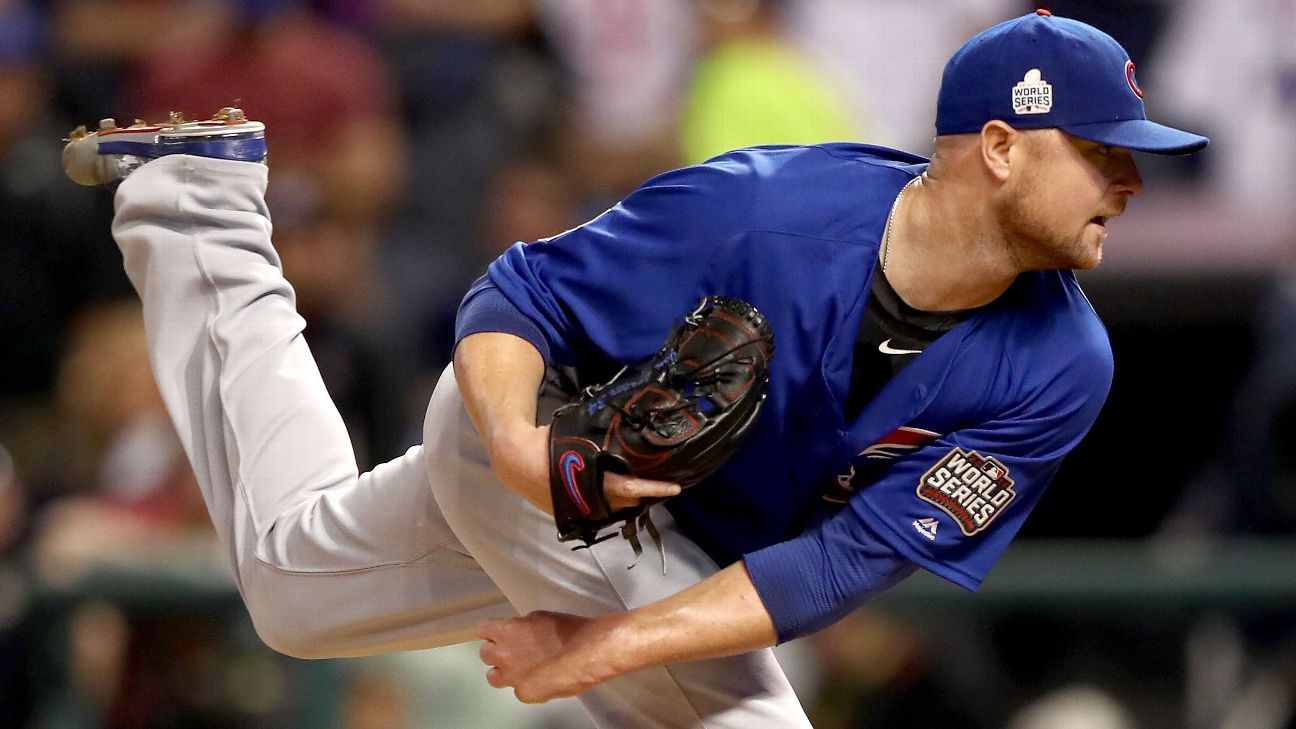 Now that Jon Lester has announced his retirement from baseball after 16 major league seasons, there will undoubtedly be a good discussion about his Hall of Fame candidacy in five years.

But as far as his teammates are concerned, there is no debate.

“I told my kids, I’m not going until Jon gets in,” former Boston Red Sox and Chicago Cubs teammate John Lackey said. “That’s when we’re going to Cooperstown. I can’t wait to be there.”

Debate about Lester’s Cooperstown credentials will center on his numbers on the field: He won 200 games, played an integral part in three World Series titles for two historic organizations, authored a no-hitter and made five All-Star teams. But his teammates will most remember him for his intensity on the mound and personality in the clubhouse. To them, he was the very definition of a winner.

“If you’re building a baseball player, as far as how they treat other people, what their goals are, how you want them to compete and act on and off the field, he’s the model,” Chicago Cubs manager David Ross said.

A sequence from a midsummer game in the final weeks of his career might sum up the left-hander best.

In mid-August, Lester was on the mound for the St. Louis Cardinals, still trying to play their way into the playoff race, against the NL Central-leading Milwaukee Brewers. In the top of the first inning, Brewers star Christian Yelich hit a 106-mph line drive off Lester’s calf for an infield single.

After getting the next batter out to end the inning, Lester was clearly hurting when he came to the dugout. Pitching coach Mike Maddux told him they had a reliever ready and he could come out of the game.

Lester wasn’t having any of it.

“My calf is nowhere near my heart,” he told Maddux. “I’m not coming out.”

He stayed in for three more innings in a game the Cardinals would go on to win. Two months later, when the Cardinals earned a wild-card berth, it marked the 11th time that a team employing Jon Lester would make the postseason.

“Yep, that sounds like him,” said good friend and former teammate Dustin Pedroia, who laughed at the story. “‘If you have two of them, you’re good to go.’ … That’s what we always use to say. If it was an arm or leg — ‘You’ve got another one, get out there.'”

He wasn’t afraid to speak his mind in the locker room or in front of the cameras — about his own performance, or his team’s, or even the commissioner of baseball, whom Lester called out in 2020 when Rob Manfred denigrated the World Series trophy.

While teammates looked to him for guidance, opponents were as intimidated by his drive to win as they were his devastating cutter. He was regarded as the quintessential old-school player. He didn’t dismiss the newer analytical elements in the game, but he didn’t rely on them either — if a computer was making preseason prognostications, Lester’s only interest was in proving them wrong.

That attitude was honed in Lester’s early years with the Red Sox. Lester credits then Boston ace Josh Beckett as a huge influence, along with catchers Jason Varitek and Ross.

Lester won his first two World Series rings in Boston, and he also learned what being a good teammate on and off the field meant.

“You have people from all walks of life on a team that have one goal,” Lester said. “I saw David [Ortiz] bring a lot of those guys together that you never thought would be friends. I wanted to bring that when I came to Chicago.”

While he was one of many stars on the Red Sox, Lester took on that role that Ortiz had played in Boston when he signed with the Cubs in 2015. Kris Bryant was still in the minors and players like Javy Baez, Kyle Schwarber and Anthony Rizzo had yet to reach their peak for a franchise in need of a winning mentality more than a century since its last title. Lester took it on himself to bring everyone together.

Ross recalled one memorable road trip to Oakland that included a private plane to take a group to Pebble Beach for golf. A day later it was a private bus to a Kenny Chesney concert, all expenses paid by Lester.

“It was the greatest trip I’ve ever been on,” Ross said. “It’s not about private planes and stuff, but just that he wanted everyone to have a good time.”

And there were the postgame parties Lester threw at his house not far from Wrigley Field. Everyone was invited.

“I knew we had a young team,” Lester said. “We wanted to introduce ourselves and also get to know other people. Best way to do that is off the field. Besides, we like hosting, which always helps. I’d rather just walk up to my room and go to sleep than worry about getting an Uber.”

Keep up with the latest moves, grades and analysis — all in one place — from the first half of baseball’s 2021-22 hot stove season. Tracker »

While he made life fun for his teammates, the ultra-competitive Lester maintained an “I’m here to work” attitude at the ballpark. Yelling matches between him and Ross were the norm.

“My favorite one came against Oakland [in 2014],” Ross said. “He had struck out 12 in seven innings. Then he walked the leadoff man in the eighth on four noncompetitive pitches.

“I walked out to the mound and started screaming at him, ‘Are you done?! If you’re done, I’ll let [Red Sox manager John] Farrell know.’ And he’s yelling, ‘We’re not done.’ Then he punched out the next three and ended up striking out 15 on the day.”

Ross followed Lester to Chicago in 2015 and the two picked up where they left off. After another argument when Lester shook off Ross’ calls to Freddie Freeman, Ross remembers the fallout after Freeman got an RBI base hit.

“We get in the dugout and I’m yelling at him, ‘You call your own game! You don’t need me!’ He said, ‘Don’t quit on me; I was trying to bounce it.’ We were so mad at each other.

“It was hilarious. I expected so much out of him. I look back, it’s amazing he didn’t punch me in the face.”

That competitive attitude is why Pedroia savors the one and only time he stepped into the batter’s box against Lester, during spring training batting practice in 2005.

“I knew I could get under Jon’s skin,” Pedroia said. “He wasn’t telling me what he was throwing so if he threw a cutter, I would just take it or let it hit me, I didn’t care. So when he threw me a two-seamer, I hit a missile right back off the L-screen.

“I talked so much trash to him after that. And I made it a point, I’m never going to face him again. I swear, if we played him in a regular-season game, I would have taken a day off and sat out there with a Mai Tai.”

Pedroia also never wanted to face Lester because his desire was to keep playing with him. Even after Lester was traded from Boston to Oakland in 2014, Pedroia thought they would reunite after Lester became a free agent.

“In the back of my mind, I always thought we would re-sign him,” Pedroia said. “He called me right before he signed with the Cubs. He was crying. That was probably the hardest moment in my big league career. It was late. I was in bed and he called me. I was like ‘Jon, it doesn’t change how I feel about you.’ That was worse than any loss that I had on the field. He was family.”

While his former teammates look back at Lester’s career with the utmost respect, his Hall of Fame chances will come down to how much voters value his October success, achievements compared to other left-handed starters and his ability to pitch deep into games for more than a decade.

“The thing I’m most proud of is I took the ball every five days,” Lester said. “That was the biggest thing for me. I always heard ‘be relied upon’ when I was younger. Whatever the outcome was, they knew they could count on me to take the ball.”

His 2.51 postseason ERA ranks eighth among all pitchers with at least 10 starts. Including only lefties, it’s fourth. His postseason win probability added is fifth behind playoff icons Mariano Rivera, Curt Schilling, John Smoltz and Andy Pettitte (the only lefty).

At a time when starters were beginning to pitch less, from 2008 to 2016, Lester threw 200 or more innings in eight of nine seasons — missing in 2011 by just 8⅓ innings. He still averaged 170 innings pitched over his final five years (not including the pandemic-shortened 2020 season) before Father Time finally caught up with him.

“The thing I’m most proud of is I took the ball every five days,” Lester said. “That was the biggest thing for me. I always heard ‘be relied upon’ when I was younger. Whatever the outcome was, they knew they could count on me to take the ball.”

When Lester recorded his 200th win last September, he became the 30th left-hander in MLB history to reach the mark. And much of his career in the sport came while that statistic became less emphasized — Lester, Zack Greinke and Justin Verlander are the only members of the 200-win club who were active last season.

“People’s perspective on number of wins is changing dramatically,” Cubs president of baseball operations Jed Hoyer said. “I’m thrilled he got to 200. The consistency of his career and the fact that he was able to be such a sensational playoff pitcher, that’s the epitome of any starting pitcher. If you change the lens [away from 300 wins being the standard to overall value], he’s one of the best pitchers of this generation.”

Those around Lester believe it’s his postseason success — time and again on the biggest stage — will be the difference-maker with voters.

“It’s not actually raising your game,” Ross said of the key to Lester’s October dominance. “It’s the ability to focus in a big game and slow things down. It becomes harder the bigger the game. Can you execute the pitch you want to?

“He was so routine-oriented, it prepared him for those moments. He took that energy the postseason creates and he was able to perform. For that reason, he was the best I’ve ever been around in the postseason.”

Whether Cooperstown is in Lester’s future now that his playing days are done remains to be seen. But one thing is for certain, according to those who spent the past 16 years watching him work — baseball is losing a unique personality who earned himself three rings with a stellar postseason career.

“Just a pro’s pro,” Lackey said. “Worked his butt off. Friggin’ took the ball every five days. Wasn’t a huge talker in the locker room. Led by example. Maybe the best playoff pitcher ever.”