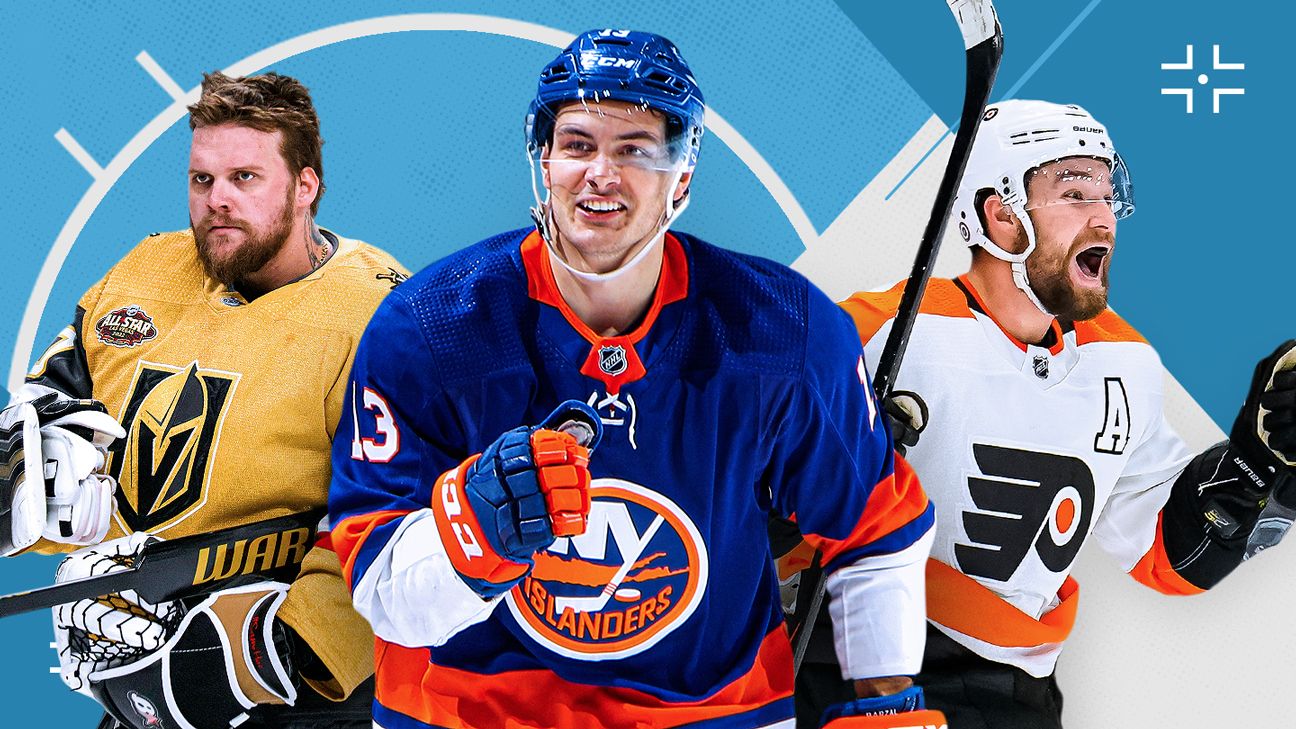 To honor this magical place, and with no small amount of corporate synergy, we’ve decided to use this week’s NHL power rankings to match all 32 teams with the Disney World attractions — rides, food, characters — that best fit their vibes.

How we rank: A panel of ESPN hockey commentators, analysts, reporters and editors rates teams against one another — taking into account game results, injuries and upcoming schedule — and those results are tabulated to produce the list featured here.

Note: Previous ranking for each team refers to the last edition, published on Jan. 5. Points percentages are through Tuesday’s games.

Churros. They’re not always right in front of you. You have to know where to find them. But once you do, the variety of flavors and the absolute sugar high you get from them makes churros better than anything else in the park.

Mad Tea Party. From Dec. 14 to Jan. 8, the Panthers had an average of 8.4 total goals in their games. They were 16-0-0 when leading after two periods and have rallied for a point in five of 12 games in which they trailed after two periods. Like the tea cups, a dizzying experience.

Astro Orbiter. Piloting a high-flying rocket ship to the stars … until you realize your aforementioned rocket ship is tethered to a pole with a metal bar, and you’ve been unable to truly take off when it matters. In fact, you just keep going in circles …

The storage lockers. During a day at the park, you might discover that you’re carrying too much with you — an overage, if you will. So you head to the long-term storage lockers to stash some salaries, er, souvenirs in there, until it’s safe to add them back to your group. And that, friends, is how you have a successful day at Walt Disney World. Or maybe even two in a row.

Jungle Cruise. A classic ride reimagined for 2021-22, with exciting new twists on all the stuff your parents used to enjoy. In other words, they can stop talking about Brian Leetch and Mike Richter, because those characters have been updated to Adam Fox and Igor Shesterkin.

Country Bear Jamboree. A down-home, southern-fried hootenanny that entertains the crowd with foot-stompin’ fun … and then you look at the standings and realize these are marauding wild beasts that will tear you from brows to boots if you are standing in their way.

Frontierland Shootin’ Arcade. The ideal spot for the NHL’s sixth-best offensive team this season (3.44 goals per game) as well as Ryan O’Reilly‘s beard.

Toy Story Mania! You sit in your spot and then just start firing away at an array of moving targets, seeing who can score the most. Which brings us to our next question: Would Alex Ovechkin ever go on another ride besides this one at Disney World?

It’s a small world. Oh, you think it’s safe to leave it out of your plans? Just forget it exists because you’ve seen it so many times? Well, this international menagerie — Canada, the United States, Russia, Finland, Sweden, Czechia, even Latvia — won’t be ignored just because you think the iconic ride is past its expiration date.

Space Mountain. What else could it be other than Disney World’s greatest (Kirill the) thrill ride?

Star Wars: Galaxy’s Edge. A multimillion-dollar world of imagination that offers thrilling rides, lasting memories and the unwavering feeling that it never goes quite as far as you’d like it to go. That weird feeling in your stomach about the Golden Knights in the playoffs is not because you drank too much blue milk …

Walt Disney’s Enchanted Tiki Room. You’re wandering around, trying to find your way. Is there anyone who can help get you back on track? Step into the tiki room, and you’ll realize that … Tuuk can. (Groan.)

Remy’s Ratatouille Adventure. The newest of the new, a 4D-adventure ride in Epcot. Rats cooking French cuisine is the food equivalent of tossing the puck over the net to one’s teammate for a goal. In this comparison, Anton Ego is played by John Tortorella.

Meeting Russell and Dug at Discovery Island. Watch as the talking dog and the Wilderness Explorer boy are reunited with the curmudgeonly old man, whose floating balloon house landed in Calgary, Alberta, where he inexplicably became head coach of the Flames last season.

Star Wars: Rise of the Resistance. Charismatic rebels try to escape the clutches of a soul-crushing empire, whose constant mistakes and short-sightedness — no one thought to check the vulnerabilities of the thermal oscillator for the planet-destroying weapon? — have it constantly taking L’s. It appears Connor and Leon are being held in Detention Block AA-23, sub-level five.

The Many Adventures of Winnie the Pooh. Yes, this is an overt reference to Bruce Boudreau. Spot the lie.

Canada Far and Wide in Circle-Vision 360. We don’t know what’s wilder: That there’s a part of Epcot dedicated to the mysterious grandeur of that far-off land “Canada,” or that there’s a 12-minute movie about this legendary land of the north. Jets logos would look keen on mouse ears, honestly.

Na’vi River Journey. Based on a Hollywood production that at one point was a cultural sensation … for a very finite number of years. But hey, the sequels are on their way to take us back to Pandora! (Not to be confused with “Avatar Flight of Passage,” which is a thrill ride, while this one is a lot more deliberate and moderately paced. Such is Todd McLellan.)

Under the Sea, Journey of The Little Mermaid. Can you believe there are no sharks referenced in “Under the Sea?” The sturgeon and the ray get the urge and start to play. The newt plays the flute, the carp plays the harp, the plaice plays the bass, the bass plays the brass, the chub play the tub, the fluke is the duke of soul, the ling’s on the strings, the trout’s rockin’ out, the blackfish sings, the smelt and the sprat know where it’s at, and the blowfish blows on a trumpet. I’ve been under the sea. I know there are sharks there. We cannot stand for this erasure.

Spaceship Earth. Like the Winged Wheel, the large geodesic sphere has been an iconic image for decades, housing a journey through history itself. It’s currently undergoing a lengthy renovation while remaining open, and the end result should be extraordinary.

Expedition Everest: Legend of the Forbidden Mountain. The roller coaster you ride forward and then backward. Just when you think it’s over, things get interesting. Like when you’re a team that has won five out of 15 times trailing after two periods, the most for any team in the NHL this season.

Slinky Dog Dash. Do not be fooled by its playful vibe, endearing whimsy and elaborate theming. When this thing gets going … it really gets going.

Trying to get that last ride in before the park closes. You got a late start at the park. You’ve managed to get through only a couple of lines. They’re asking guests to head to the exits. You’re sprinting to see if you can hop on your favorite ride, but time is running out. Either this is going to be a disappointing trip, or it’s going to end with a last-minute thrill.

Splash Mountain. For a few reasons, but we’ll go with that whole “undergoing a five-story drop after being at the top of the mountain.”

Pirates of the Caribbean. They look like the rapscallion, lawless bullies that we see menacing people in the history books. Yet this version is inherently nonthreatening.

Pin trading huts. “Hey, the last time we were here, we saw a bunch of pins get traded.”

“Well, the pin traders had four years to prepare for us, so there were no trades available.”

“So you were expecting the same kinds of pins to be available like last time, but no one was offering them, and … you just decided not to acquire any pins at all?”

“Correct. We’re trying to make sure there’s room on the lanyard next summer in case some pins we really want become available.”

“OK, keep telling yourself that …”

Hall of Presidents. Filled with Senators, interesting more than entertaining, and basically a place your parents drag you to “learn something” when all you want to do is hit Space Mountain for the 100th time.

Bibbidi Bobbidi Boutique. The Canadiens got to play dress-up as a Stanley Cup contender for a few months, and then watched their roster turn back into a pumpkin. Currently closed for renovations. (Also, “boutique” is French in origin, so this is perfect.)

Buffalo chicken spring rolls. Not to pull the curtain back on this intricate process, but I searched “Buffalo” and “Disney World” and discovered that these delicacies are now available again at the Spring Roll Cart in the Magic Kingdom. And I’ve made the mistake of writing this ranking on an empty stomach. So we can go with, “they have a rough exterior but some promising ingredients on the inside,” and I think that works. But mostly I just want to devour like 20 of these.

The entrance line. It’s the last place you want to be. A tedious wait before you’re allowed to have fun again, with impatient little rug rats pulling on your shirt, asking when they can finally get their mouse ears. And there’s no skipping the queue with a Lightning Lane.