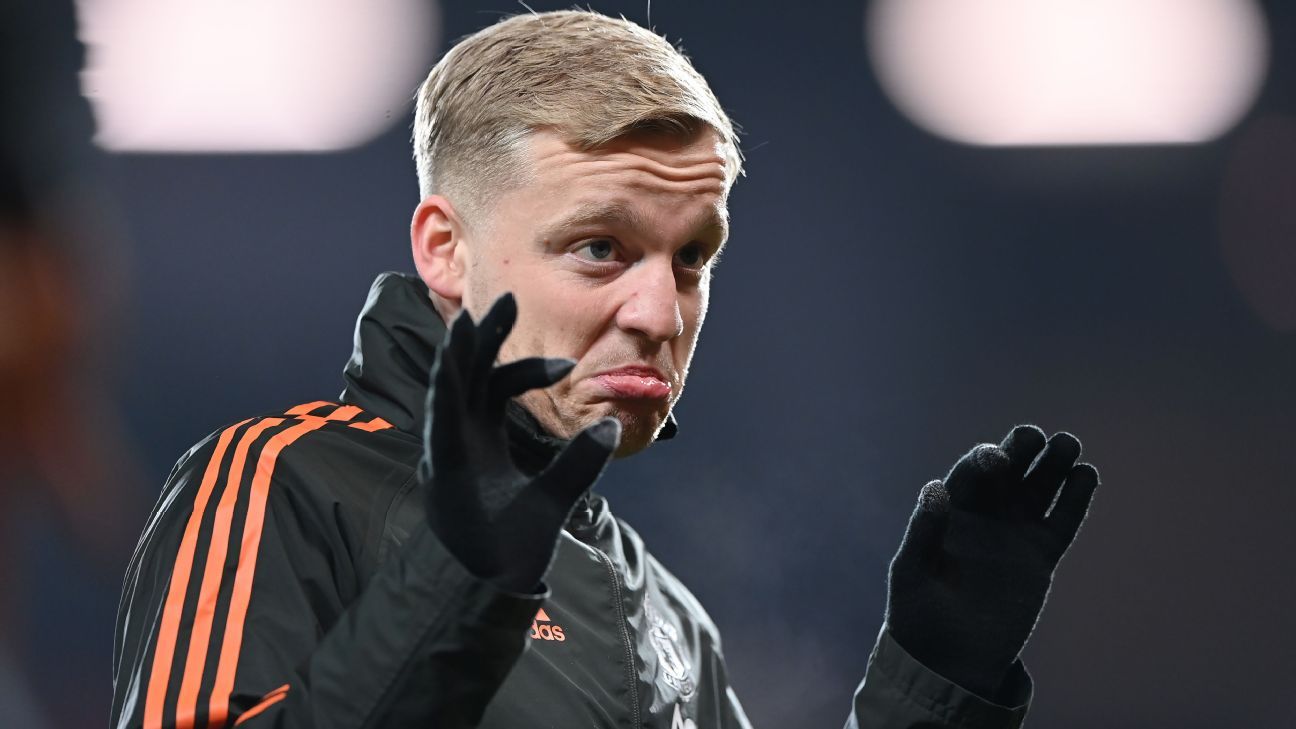 Donny van de Beek made his 50th appearance for Manchester United at the weekend. We know this because the club’s Twitter account celebrated the 24-year-old’s milestone, albeit as an 89th-minute substitute as Ralf Rangnick’s team were desperately attempting to hold on to a 2-2 draw against Aston Villa, having led 2-0 until the 77th minute.

What the United tweet didn’t tell us was that the club have played 89 games in all competitions since Van de Beek arrived at Old Trafford in a deal worth an initial £35 million from Ajax in August 2020, and the Netherlands international has started just 19 of them.

In total, Van de Beek has completed 90 minutes on nine occasions for United. This season, his eight Premier League appearances have amounted to 68 minutes on the pitch, while three of his last five league games have been one-minute appearances from the bench, only serving to explain why he has been given the cruel nickname of “Donny van de Bench” among fans.

His 18 months at United have been a story of bewilderment, and the fans have now started chanting his name during games, almost out of sympathy for a player who has arguably not even been given the chance to fail at Old Trafford, never mind succeed. Playing 50 games for Manchester United would be the stuff of dreams for many players, but when you break the numbers down — 1,836 minutes overall at an average of 36.7 minutes per appearance — it’s difficult to spin it into any kind of positive.

Despite this, the club Twitter account chose to highlight the fact that Van de Beek reached his half-century of appearances. The damning responses to the tweet made it pretty clear that it was more of an embarrassment to both United and Van de Beek that it has taken so long for the club’s big signing of the 2020 transfer window to reach such a basic milestone.

So how has it come to this? Van de Beek was a star player during Ajax’s run to the Champions League semifinals in 2019, when they were eliminated by Tottenham, and his performances prompted interest from Real Madrid, Tottenham and United before he finally moved to Old Trafford 12 months later. But since signing for United, he has been so consistently overlooked — first by Ole Gunnar Solskjaer and now by interim manager Rangnick — that it is a surprise he is still at the club and hasn’t been able to escape to relaunch his career elsewhere.

Sources have told ESPN that Everton were keen to sign the midfielder last summer, when Marcel Brands, then-director of football at Goodison Park, lined up a deal to take him to the club. But, having told Van de Beek and his representatives that he could leave, then-United manager Solskjaer performed a late U-turn and insisted he wanted to keep him at Old Trafford.

Van de Beek had been encouraged at the end of last season that he would be given the chance to succeed at United, with sources saying that he had been told that many players struggle in their first season in English football and that, if he worked on his physique and fitness, he could thrive in the Premier League. He took that advice on board and built himself up physically, but Solskjaer continued to overlook him and used him as a substitute only three times in the Premier League this season before losing his job after a 4-1 defeat at Watford in November — coincidentally, a game in which Van de Beek scored United’s only goal.

But although Van de Beek’s playing stats show that he has been given limited opportunities to impress at United, sources have said that his numbers only support the difficult truth that he was not wanted by Solskjaer in the first place and that he is simply not good enough to make it at United.

In the summer of 2020, Solskjaer wanted United to sign Borussia Dortmund winger Jadon Sancho and Birmingham City midfielder Jude Bellingham, but the club failed to recruit either player and ended up with Van de Beek because Old Trafford’s recruitment team believed his performance data at Ajax, combined with his age, represented good value.

One source told ESPN that United’s coaches felt that, although he was technically sound, Van de Beek merely added to a crowded area of the squad and that he was “not much different to Jesse Lingard” in terms of what he offered the team. Sources also said that Van de Beek is too slow to be an effective Premier League player and that, despite his attempt to become stronger physically, he continues to lack the strength required at the highest level.

His tenacity and work rate have helped him win the respect of fans and teammates alike, however, and sources said that there has long been a sense within the dressing room that he has not been given the chance to prove himself with a run of games to build his fitness and confidence.

Sporadic appearances from the bench, a minute here and a minute there, are never going to lead to a successful outcome for Van de Beek or United. He is a player in need of a chance and a manager who believes in him, but he has neither at United. When he leaves, and it is when rather than if, Van de Beek will be justified in looking back on a wasted period at Old Trafford. But when a player is signed and the manager doesn’t want him, it is rarely going to end well.