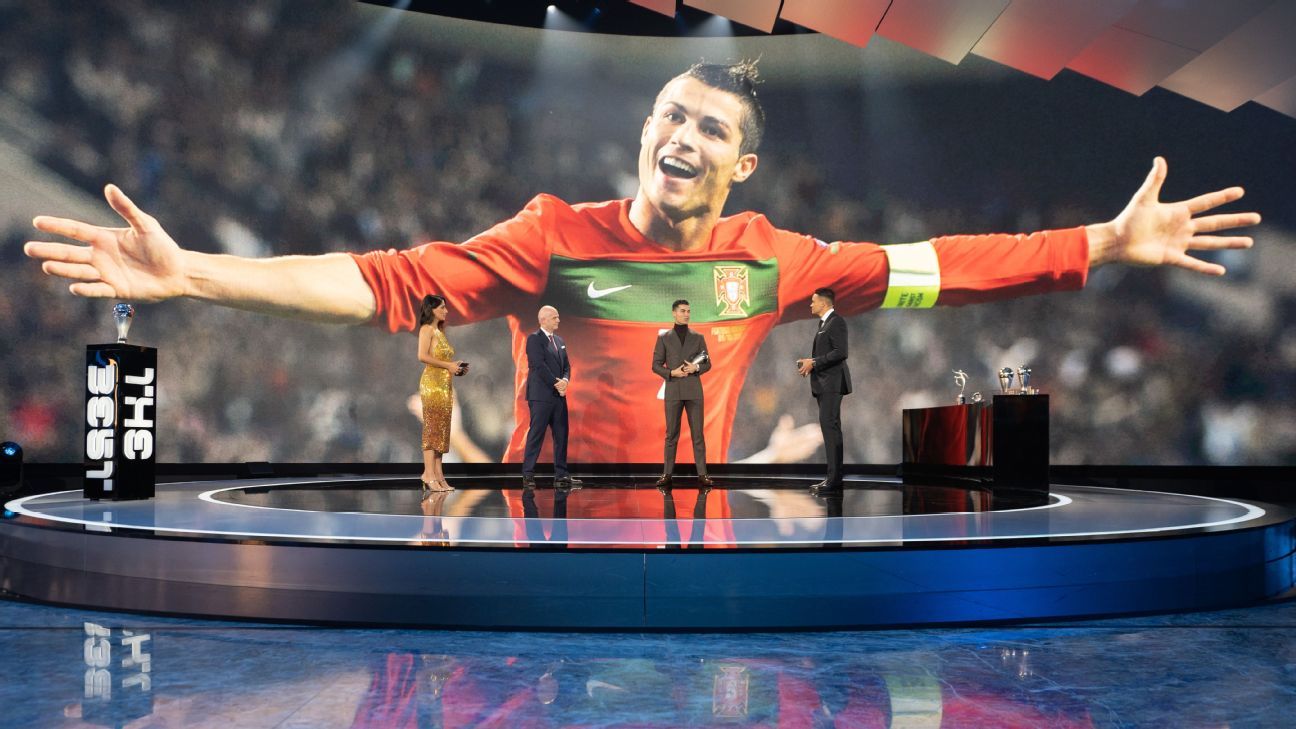 FIFA held its annual The Best awards gala in Zurich, Switzerland, on Monday, in which world soccer’s governing body heralded the biggest successes and achievements of the past year, with Robert Lewandowski and Alexia Putellas going home with the big individual awards.

Prolific Bayern Munich and Poland striker Lewandowski was crowned The Best FIFA Men’s Player for the second successive year after he scored 51 goals in 44 games in 2021 for club and country, finishing as the Bundesliga’s top scorer and winning his ninth German top flight-title in the process.

Lewandowski ties Cristiano Ronaldo for the most The Best FIFA Men’s Player awards (two apiece), with Luka Modric and Lionel Messi the only other male stars to have collected the accolade since its introduction in 2016.

Despite appearing on the shortlist for the very first time, Barcelona midfielder Putellas was named The Best FIFA Women’s Player. The 27-year-old, who captained Barca to the Treble in 2021-22 and became Spain‘s all-time record appearance maker in October, can add the trophy to the Ballon d’Or she won last month.

While few could argue with the Player of the Year awards, the announcement of the 2021 FIFA FIFPRO World 11s caused more than a little consternation in both the men’s and women’s categories.

Mohamed Salah was once again spurned as the Liverpool forward missed out on a spot despite being nominated for the men’s individual award. The Egypt international, who hit some of the best form of his career in 2021, also finished a lowly seventh in the voting for the Ballon d’Or. Just to rub it in a little more, Salah also missed out on a spot despite FIFA implementing a truly baffling 3-3-4 formation in order to squeeze an inordinate number of forwards into their World 11.

While the World 11 is voted on exclusively by almost 20,000 professional players who are affiliated with FIFPro, The Best FIFA individual awards are decided by national team coaches and captains, selected journalists and fans via an online vote. The votes of the captains, coaches and journalists are made available to view after the winners are announced, and the results are revealing.

For example, neither Messi nor Ronaldo could bring themselves to vote for the other in their top three players in the world. Messi gave his top vote to Paris Saint-Germain teammate Neymar, despite the Brazil forward enduring a fairly unremarkable calendar year, much of which was marred by injury. Ronaldo, meanwhile, opted to give his first-choice vote to Lewandowski while also including not one but two of Chelsea‘s Champions League-winning midfield in his top three.

This is how Messi, Ronaldo and Lewandowski voted for The Best FIFA Men’s Player award 👀 pic.twitter.com/jDVT4Auhwa

Elsewhere, Salah voted for Jorginho, Messi and Lewandowski in that order, while Luka Modric and Eden Hazard of Croatia and Belgium, respectively, both gave their primary vote to Real Madrid teammate Karim Benzema.

Chelsea monopolised the managers’ awards as Thomas Tuchel was crowned The Best FIFA Men’s Coach after winning the Champions League, and Emma Hayes was named Best FIFA Women’s Coach after winning the Women’s Super League, FA Cup and League Cup as well as reaching the Champions League final. A clearly shocked Hayes appeared over video link to accept her award despite her doorbell going off at an inopportune moment.

“The doorbell just rang and I had to press the mute button!” 😂🔕

Chelsea’s Emma Hayes says she was ‘stunned’ after being named The Best FIFA Women’s Coach for 2021. pic.twitter.com/DsNkNQoTvV

She wasn’t the only one who was surprised to win the award ahead of Lluis Cortes, the coach who led Barcelona to their Treble by trouncing Hayes’ Chelsea side 4-0 in the Champions League final. What’s more, none of Barca’s players found their way into the 2021 FIFA FIFPRO Women’s World 11, either.

“I’m really surprised by FIFA’s XI,” Cortes said on Tuesday. “It’s absurd that there was not a single Barca player in there. With the 24 players I had at Barca last season, I could pick any side and we would beat the team chosen at The Best. I received as many messages yesterday as when we won the Treble. Players and members of staff have also written to me calling it a robbery.”

On missing out on the coach award, he added: “I was half-surprised in my case. We already know how these awards work and, of course, there was always a chance one of the other coaches won it.”

🏆✨ Cristiano Ronaldo is the recipient of #TheBest FIFA Special Award!

Ronaldo failed to finish in the top three of the Best Men’s Award for the first time in the award’s history, but the Manchester United star was able to console himself with a special award bestowed to him by FIFA for breaking the men’s international goal-scoring record in 2021. By scoring his 110th goal (and shortly after, his 111th) for Portugal back in September, Ronaldo broke a record previously held for many years by Iran legend Ali Daei. Accepting his award in Zurich, the 36-year-old forward was typically humble as he referred to himself as the “best goal scorer ever.”

He said: “[It’s] very beautiful. It was a dream. I never thought about beating that record, of scoring 115. The record was 109, right? So I’m six ahead. I’m so proud [to receive] a special award from FIFA, an organisation that I respect a lot.

“I’m very happy. It’s a special award for me to be the best goal scorer ever. It’s a great achievement. I’m so proud. I never thought that one day I would be the No. 1 It’s a great honour for me. It’s great to be the goal scorer of all time.”

Tottenham Hotspur were also winners at The Best FIFA Awards as Erik Lamela picked up the Puskas Award for his audacious rabona goal against Arsenal in the north London derby.

The Argentine forward has since moved on to Sevilla, but the award ensures back-to-back goal-of-the-year prizes for Spurs, who also claimed the 2020 award thanks to Son Heung-Min‘s 75-metre solo dash against Burnley.

Of course, Lamela’s Puskas Award came as absolutely no surprise to his clairvoyant former teammate, Jan Vertonghen, who was keen to remind everyone that he called it at the time.

Elsewhere, FIFA presented a unique fan award to the supporters of Denmark and Finland, who outdid themselves at Euro 2020 after witnessing Christian Eriksen‘s shocking collapse on the pitch from a cardiac arrest. The two sets of fans combined their voices to chant the name of the stricken midfielder in a stirring show of support as he was taken to a hospital close to Copenhagen’s Parken stadium.

And last, but by no means least, FIFA also presented its Fair Play award to the Denmark team and staff for their reaction to the medical emergency, for shielding and supporting Eriksen and for ultimately helping to save the midfielder’s life.

Without doubt, the most important and well-deserved award of the entire night.