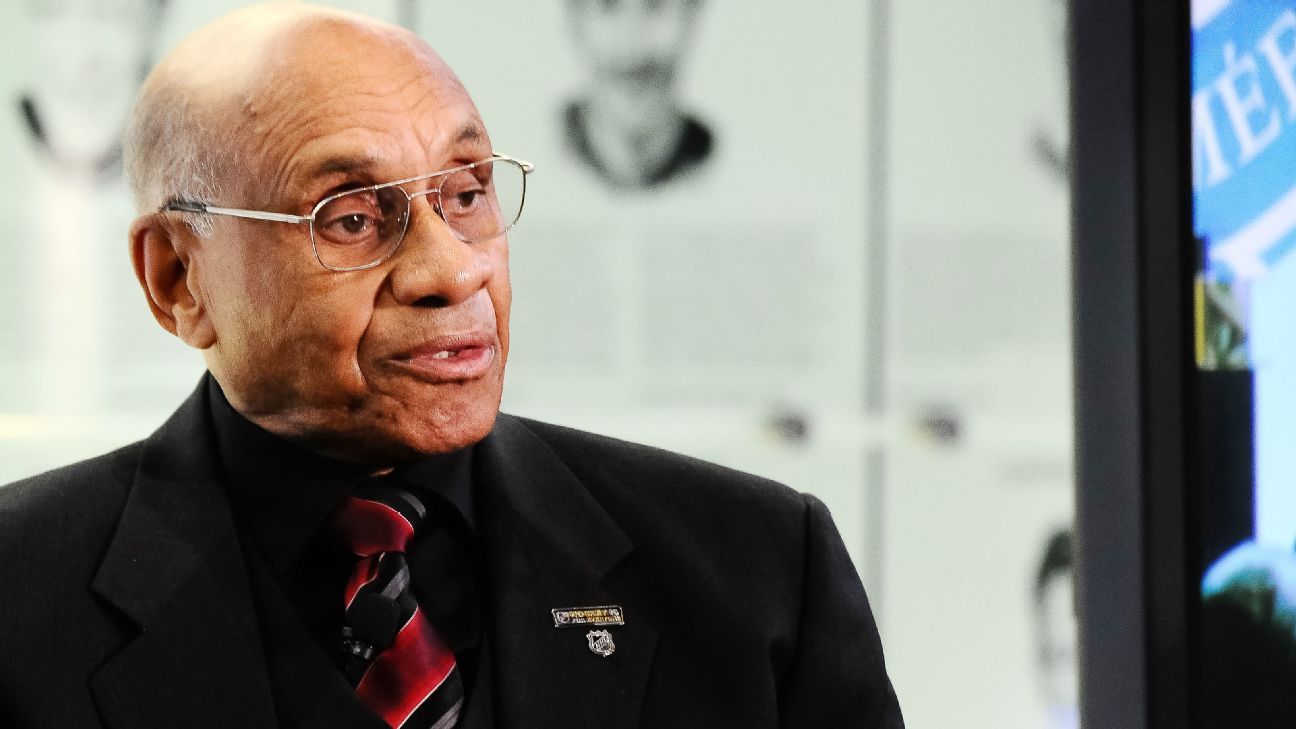 Willie O’Ree, the first Black player to appear in an NHL game, finally had his No. 22 retired by the Boston Bruins on Tuesday night.

“From a young age, my heart and my mind were set on making it to the NHL. I’m grateful and honored that it was with the Bruins,” said O’Ree, in a speech delivered virtually before the Bruins’ game against the Carolina Hurricanes in Boston.

“To the Bruins fans, I am honored to have had the pleasure of playing before you. Thank you for your tremendous love and support,” O’Ree said. “This is an unforgettable day. I am overwhelmed and thrilled to be a part of the Bruins, forever.”

O’Ree was inducted into the Hockey Hall of Fame in 2018. A native of Fredericton, New Brunswick, Canada, he has served as a diversity ambassador for the NHL over the last few decades.

He delivered his keynote remarks virtually from his family’s home in San Diego.

“While my family and I looked forward to participating in the ceremonies in-person, the long travel and associated risks that come along with a cross-country trip have led us to make the difficult decision to participate virtually,” O’Ree said earlier this month.

Bruins players took the ice for warm-ups in special edition jerseys with commemorative Willie O’Ree patches on them — his No. 22 inside their logo, with his two NHL seasons listed underneath. The players also wore No. 22 in warm-ups. Inside their dressing room, their lockers had commemorative nameplates with the patch and a photo of O’Ree. The TD Garden ice had No. 22 decals installed behind both nets, where they will remain for the next three home games in Boston.

The celebration extended outside the arena, too. The city of Boston declared Jan. 18 “Willie O’Ree Day” in the city. Fenway Park, Gillette Stadium and City Hall were all lit up in gold to honor him. Arenas around the NHL honored O’Ree on the Jumbotron before games.

“I think it’s a great honor for Willie,” Boston coach Bruce Cassidy said. “He’s a trailblazer to say the least. I’m very happy for him and his family.”

The Bruins met with O’Ree virtually on Monday, with players gathered in the team’s film room. He was given one of his trademark fedoras by the team, with winger David Pastrnak adding that it had feathers in Bruins colors tucked into the band.

Players of color from around the NHL also celebrated the moment for O’Ree. Some appeared in the pregame video tribute, including New York Rangers forward Ryan Reaves, Tampa Bay Lightning defenseman Mathieu Joseph.

Others reached out on social media.

“Tonight, my idol Willie O’Ree’s No. 22 will be hung from the rafters,” tweeted Wayne Simmonds of the Toronto Maple Leafs. “I can’t stress how much Mr. O’Ree has meant to me and millions of other BIPOC kids who love the game of hockey.”