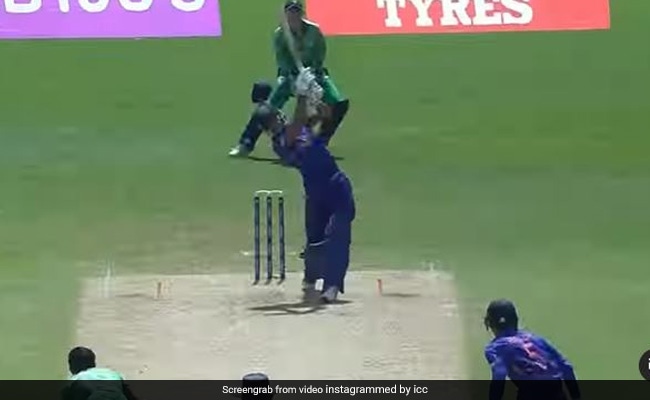 Rajvardhan Hangargekar has set the ICC U19 World Cup 2022 on fire with his performance with both bat and ball. The Maharashtra cricketer is a right-arm fast bowler – fast is the keyword here – and a lower middle-order batter with abilities to hit the ball long. Hangargekar’s talent with the ball was in full view during India U19’s opening match against South Africa, in which he had the Proteas top-order huffing and puffing with sheer pace. In India’s second outing against Ireland on Wednesday, it was Hangargekar’s prowess with the willow that caught the eye. The lanky cricketer hit as many as five towering sixes after walking in to bat at No.5, mainly to give the Indian innings a big finish. And he did not disappoint.

Hangargekar hit left-spinner Nathan McGuire for two sixes in the 49th over and then followed that one with a hat-trick of sixes in the last over off right-arm medium pacer Muzamil Sherzad to help India post a challenging total of 307 for five, batting first.

Hangargekar remained unbeaten on 39 off just 17 balls, scoring at a strike rate of 229.41.

The right-armer then bowled a good spell with the new ball and finished with 1 for 17 in his 7 overs.

India stormed into the Super League quarterfinals of the U-19 World Cup after thrashing minnows Ireland by a whopping 174 runs. The win on Wednesday by such a huge margin is significant as the team fielded only the available 11 players after six members of the side were forced into isolation after testing Covid positive.

Put into bat at the picturesque Brian Lara stadium, India first rode on Harnoor Singh’s brisk 88, which was well complimented by a run-a-ball 79 by his opening partner Angkrish Raghuvanshi, to post a challenging 307 for five.

The Hrishikesh Kanitkar-coached side then bundled out the opposition for meagre 133 in 39 overs to register a comfortable win.

For India, Sangwan, Gautam and Tambe picked two wickets each Ravi Kumar (1/11) and spinner Vicky Ostwal (1/22) too played their parts to perfection.