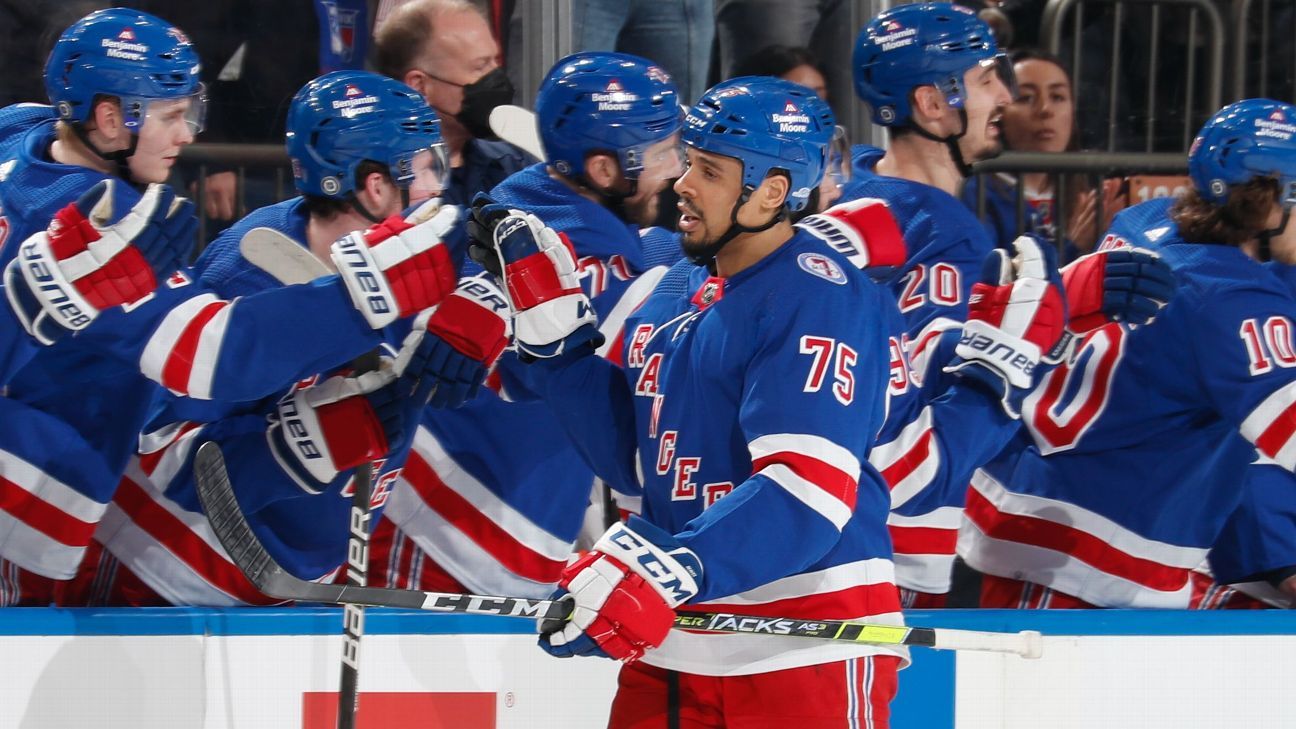 NEW YORK — Ryan Reaves, a quick-witted forward, was brought to the New York Rangers in the offseason to provide toughness, grit, some size on the fourth line, and maybe even a few laughs on the bench.

Goals were not on that list, and the 34-year-old veteran lived up to that with zero of them in his first 32 games. Game No. 33, though, was a different story.

“I didn’t really change much,” Reaves said. “I had a terrible nap (before the game) and a Red Bull, and I felt good.”

The 6-foot-2 Reaves scored the first two goals of his Rangers career, after scoring just one last season for the Vegas Golden Knights, and New York outlasted the Toronto Maple Leafs, 6-3, in a battle of Eastern Conference elite teams.

With a Madison Square Garden crowd at a playoff pitch, the Rangers rallied from a 2-0 and a 3-1 deficit in the first period to improve to 26-10-4, pulling ahead of the Carolina Hurricanes for first place in the Metropolitan Division.

“I think we know it. I think maybe some of the league doesn’t believe it, but let them keep (not) believing it,” Reaves said, when asked if the Rangers should be considered among the best teams in the league. “We’re gonna keep doing our thing and, I mean, the standings don’t lie.”

It wasn’t all Reaves against the short-handed Maple Leafs. Chris Kreider notched his 25th goal, Ryan Strome had a goal and an assist, and Jacob Trouba and Artemi Panarin each added two assists for New York. Igor Shesterkin stopped 35 shots., including 27 over the final two periods.

Mitch Marner had a goal and an assist, and Ilya Mikheyev and Michael Bunting also scored for the Maple Leafs, who are still missing some regulars due to COVID-19 protocols. Jack Campbell had 21 saves.

Shesterkin stopped William Nylander on a breakaway 2:11 into the third period to keep the score tied at 3 and draw chants of “I-gor! I-gor!” from the crowd.

Strome put the Rangers ahead with 9:10 remaining. Ryan Lindgren‘s shot was deflected by Nylander, but the puck went to Strome on the right side and he put it in before Campbell could get over in position. It was Strome’s ninth of the season.

Kreider made it 5-3 as he scored from the left side on a rebound of Jacob Trouba’s shot from the right point with 4:27 remaining.

But even for those Rangers, who often find their name on the score sheet, they knew what the difference was Wednesday.

“The fourth line, honestly,” Strome said. “Even without the goals, I think the whole game they were the only line that was able to get in there and forecheck and create turnovers and have sustained zone time. We fed off that.”

Auston Matthews, who scored in 10 straight road games, nearly extended his streak and pulled the Maple Leafs back within one with 3:52 remaining when the puck went off his skate and in, but it was disallowed after officials determined he had made a distinct kicking motion.

The Rangers will meet the Hurricanes on Friday in North Carolina and Reaves is not sure there’s a better way to enter that elite matchup than coming off this type of victory.

“It shows that we can we can hang with the big boys … that we are one of the big boys,” he said. “We’ve got to keep beating the playoff teams. That’s something we’ve talked about, but I think we’re proving to the league that we’re a contender.”

Formula 1: Sexist comments ‘do not reflect’ FIA boss Mohammed Ben Sulayem’s beliefs
World Rugby signals intent to lower pro tackling height
Eagles’ Brown: Not a ‘diva,’ but I want the ball
Is anyone getting into the Hall of Fame? Everything you need to know on ballot reveal day
FIA accused of ‘suppressing drivers’ freedom of speech’