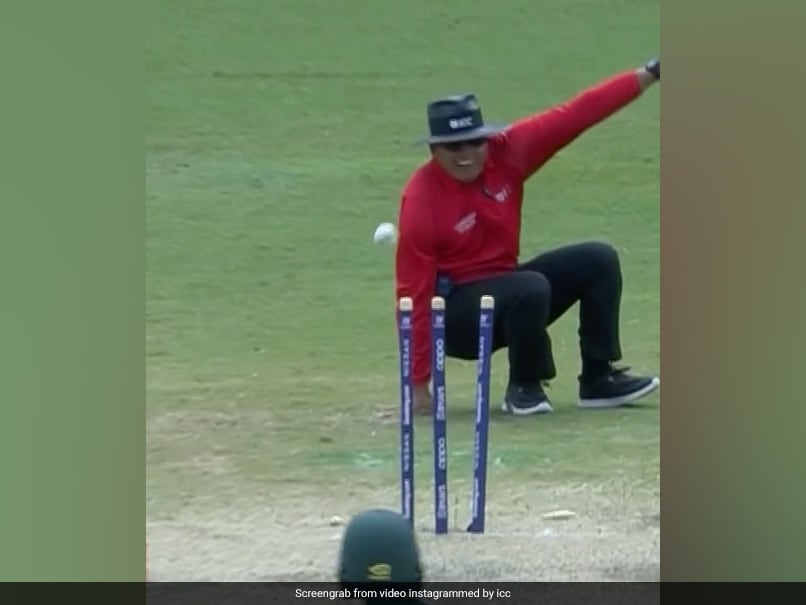 The game between Pak U-19 and AFG U-19 proved that “umpiring is not an easy job”.© Instagram

An incident during Pakistan’s Group C encounter against Afghanistan in the ongoing ICC U-19 Cricket World Cup proved that “umpiring is not an easy job”. During the 47th over of Pakistan’s innings, Zeeshan Zameer received an overpitched delivery from Naveed Zadran and he smashed it straight down the pitch. The ball hit the stumps at the non-striker’s end, went straight through and hit the umpire. The International Cricket Council (ICC) took to Instagram to post a video of the incident and captioned it as, “Umpiring is not an easy job”.

Here is the video:

Zameer was eventually dismissed after registering three runs off eight balls. He lost his wicket to Zadran in the 49th over.

Pakistan eventually posted 239 for nine in 50 overs, setting a target of 240 runs.

Captain Qasim Akram also made a noteworthy contribution and added 38 runs to the scoreboard. Meanwhile, Maaz Sadaqat smashed an unbeaten knock of 42 runs off 37 balls, with seven fours.

In reply, Afghanistan got off to a decent start, with Bilal Sayedi making steady progress. However, despite not losing too many wickets, the Afghans scored at a slow rate. With the run-rate climbing, Afghanistan lost the plot, and threw their wickets away in search of quick runs.

Ijaz Ahmad Ahmadzai played a good hand of 39 off 48 balls but failed to kick on while Noor Ahmad impressed with a 18-ball 29 but it wasn’t enough as Afghanistan lost the match by 24 runs.

The win helped Pakistan qualify for the next stage of the U19 World Cup 2022.