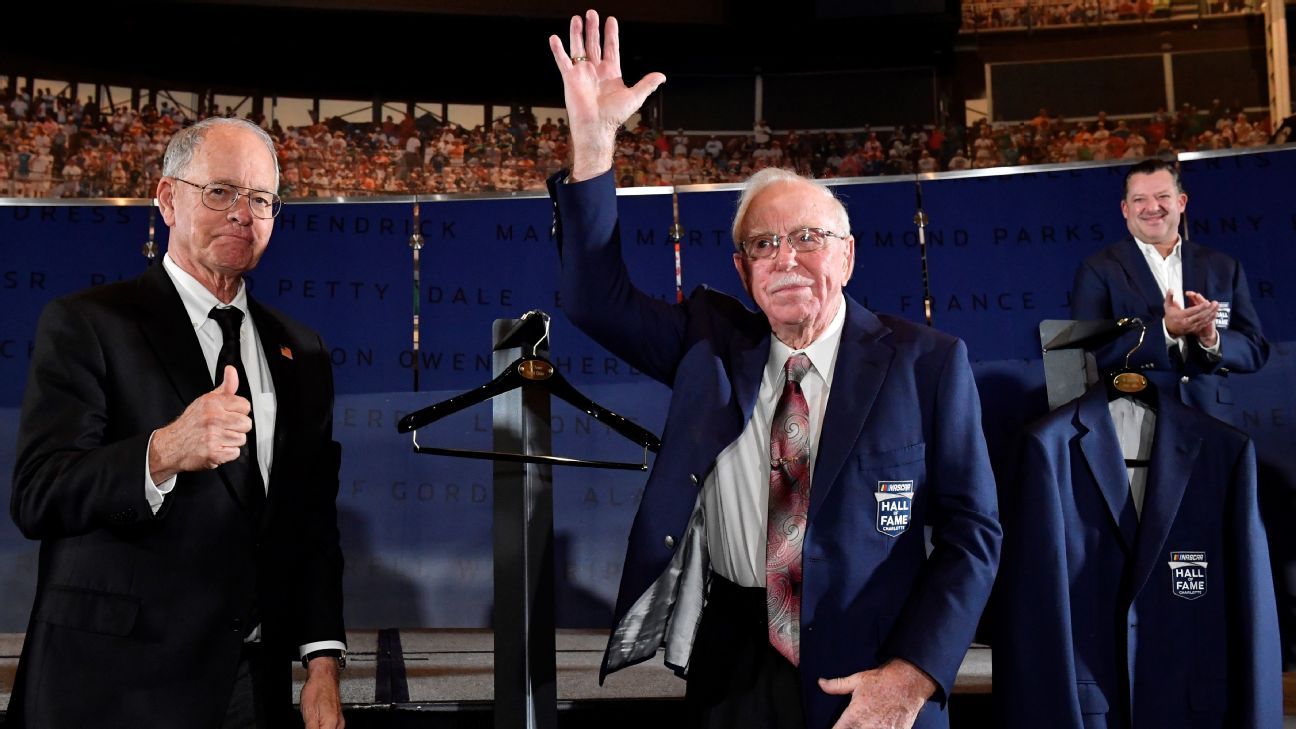 CHARLOTTE, N.C. — Red Farmer, one of the top late-model drivers, and the late Mike Stefanik, considered one of the most talented modified race car drivers to ever get behind a wheel, have been inducted into the NASCAR Hall of Fame.

They were among the three drivers to be inducted Friday night, joining Dale Earnhardt Jr.

The group was selected in 2020, but the induction ceremony was postponed more than a year due to the coronavirus pandemic.

Farmer’s exact win total during his career is unknown, but it is “somewhere north of 700,” according to the NASCAR Hall of Fame.

A member of the famed “Alabama Gang,” Farmer won NASCAR’s Modified Division championship in 1956 followed by three consecutive championships in the Late Model Sportsman Division from 1969-71. Farmer preferred racing late models, but he did run 36 Cup Series races with his best finish being fourth place.

In 1998, Farmer was named to NASCAR’s list of its 50 greatest drivers.

He began his career in 1948 — the same year NASCAR was founded.

Farmer has lived a charmed life — surviving a helicopter crash that killed NASCAR driver Davey Allison, a tornado that struck and damaged his car and trailer and a bout with COVID-19.

Through it all, he continues to drive on short tracks — even at age 89.

“It’s something that gets in your blood and you can’t get it out,” said Farmer, who said he can’t wait to drive on Talladega’s short track just days after having a treatment on his heart. “I haven’t gotten it out of my blood in 75 years. … I have had a great life and I wouldn’t trade anything for it.”

Farmer opened his acceptance speech by joking that he hoped the crowd had some time because he had 75 years of racing to talk about.

Farmer is the first driver to be inducted in on the newly created “pioneer” ballot, which recognizes drivers whose careers began prior to 1962. He received 71% of the vote on the pioneer ballot.

Farmer was inducted by Hall of Famer Tony Stewart.

Stefanik, who died in a plane crash in 2019, won nine all-time NASCAR championships — tied with Richie Evans for the most ever.

He won seven titles in the NASCAR Whelen Modified Tour and two others in the Busch North Series. Stefanik holds modified series records for championships, wins, poles, and top-five and top-10 finishes. In 2003, he was named one of the tour’s 10 greatest drivers.

Former car owner and crew chief Ray Evernham, a member of the 2018 Hall of Fame class, inducted Stefanik into the Hall. Stefanik’s wife, Julie, accepted the honor on behalf of her husband and said he always respected his competitors.

“He was very methodical about his approach and he was a clean and fair racer,” she said.

The late Ralph Seagraves was selected as the recipient of the Landmark Award for Outstanding Contributions to NASCAR.

A former official with R.J. Reynolds Tobacco Co., Seagraves helped sponsor the Winston Cup Series, a partnership that helped NASCAR launch into the national spotlight and created a bedrock of stability for three decades.