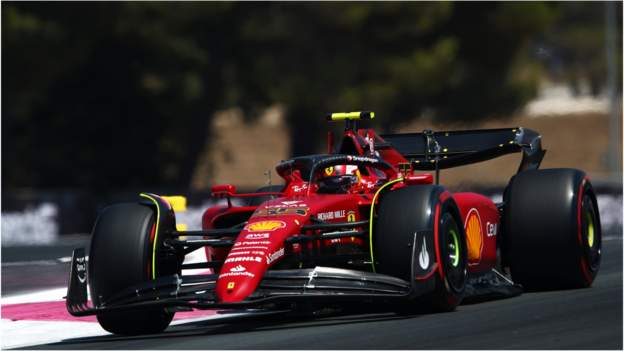 Ferrari’s Carlos Sainz will have a grid penalty at the French Grand Prix for using too many engine parts.

For now, he has only a 10-place penalty after using a third electronics control unit, one more than permitted.

But following his engine fire in the Austrian Grand Prix, Ferrari are expected to take further parts later this weekend, sending the Spaniard to the back of the grid.

Leclerc and title rival Max Verstappen were separated by just 0.091 seconds as both tried out new parts, focused on developments to the floors of their cars.

Sainz, running the old floor at Circuit Paul Ricard so Ferrari could compare the data from both designs before deciding which to run for the weekend, was third fastest, 0.338secs off Leclerc.

Verstappen made a mistake on his fastest lap, running wide and bouncing over the kerb on the exit of the Beausset double left-hander, whereas Leclerc had a clean lap.

George Russell was fourth fastest in the Mercedes, which also features new parts, but he was 0.951secs off the pace.

Reserve driver Nyck de Vries was running in Lewis Hamilton’s car as one of the two mandatory ‘young driver’ outings required of each team. The Dutchman was eighth fastest, 0.5secs slower than Russell.

Pierre Gasly was fifth fastest in the heavily updated Alpha Tauri, ahead of the second Red Bull of Sergio Perez, who had a spin at Turn Six early in the session.

Wallace inks multiyear extension with 23XI team
European Championships Munich 2022: Silvers for GB cyclists Pfeiffer Georgi and Kieran Reilly
Welcome to the Sean McVay Moment
Ten trucks and over 50 tons of equipment: How the Dallas Cowboys take training camp to California
Position U 2022: Which schools produce the most talent at each position?