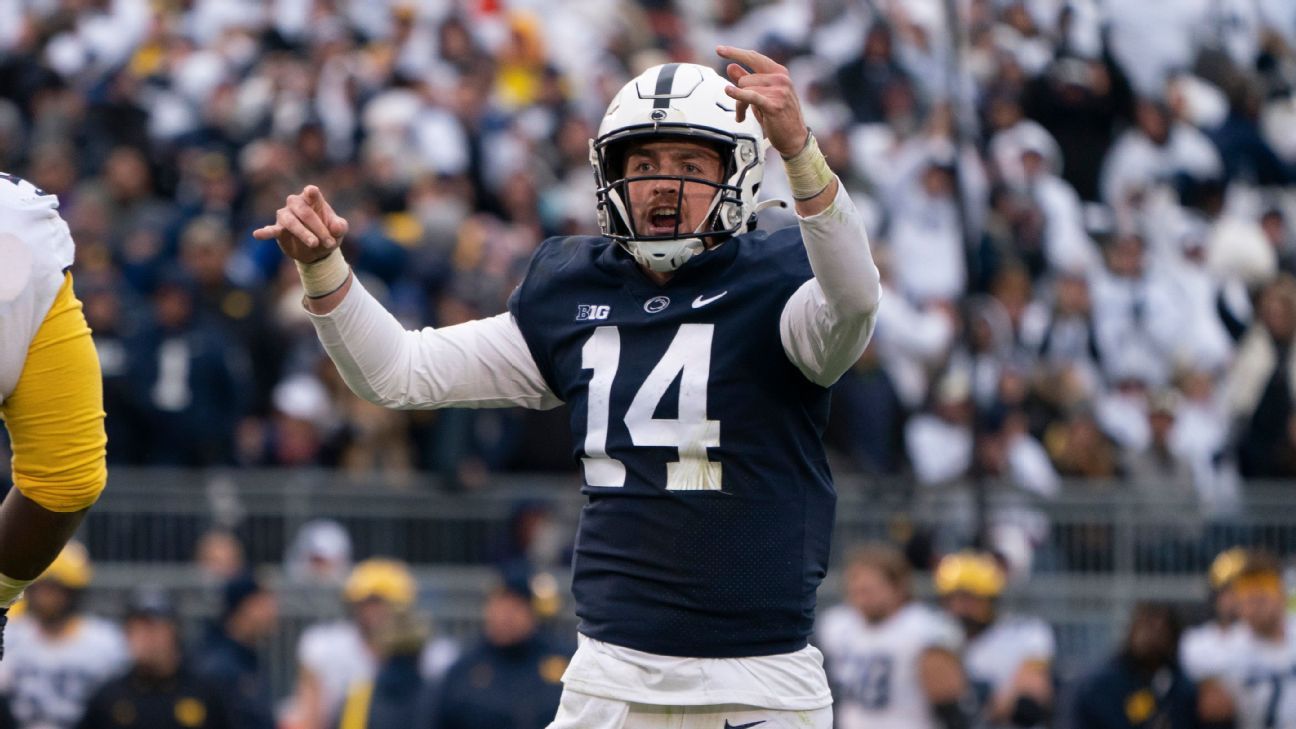 Big Ten football players have had conversations with league commissioner Kevin Warren this week about giving athletes a bigger voice in the future and about improving a variety of benefits for players. Warren also spoke with the leader of a nascent players’ association about the possibility of having an independent group represent the players in conversations with the league.

Penn State quarterback Sean Clifford said the conversations with Warren this week have been a positive, collaborative start to giving players a seat at the table in future decisions with the league. He said he and the other players he has spoken with have no intention of creating a union or entering a contentious negotiation with the league at this point.

A spokesperson for the Big Ten confirmed the commissioner spoke with players and separately with Jason Stahl, the founder and executive director of the College Football Players Association (CFBPA). Clifford and Stahl met this summer and formed a plan to organize players in the Big Ten to ask the league for improvements in medical care and a share of future revenue.

Clifford said thus far his conversations with Warren have focused on standardized medical care for players after their college careers have come to an end. He said Warren and leaders at Penn State have been receptive to the initial conversations about how to make a variety of improvements for players and former players.

“It’s been a collective group coming together,” Clifford told ESPN on Friday. “Everyone wants players to have more of a voice.”

Stahl spoke to Warren earlier this week about a trio of initial topics the CFBPA wants to negotiate with the Big Ten:

• A representative on each campus who can advocate for players during medical situations or other disputes. The representative would be hired by the CFBPA and serve an on-site role similar to the player representatives in professional sports unions.
• Funds from the conference to purchase medical insurance policies for former players that would cover the treatment of injuries from their college football careers.
• A to-be-determined percentage of media rights revenue for players.

A representative from the Big Ten confirmed that Warren spoke to Stahl but said to characterize their conversation as the beginning of any type of collective bargaining discussion is not accurate.

“The Big Ten Conference consistently communicates and collaborates with our student-athletes,” Warren said in a statement to ESPN. “We are in the process of formalizing a student-athlete advisory committee to seek input from our student-athletes about the changing landscape of college athletics. We continue to work with our member institutions to ensure our student-athletes have an outstanding and well-rounded experience, while promoting and safeguarding the mission of higher education, and prioritizing excellence and integrity in both academics and athletics.”

Clifford said he wasn’t yet ready to have a conversation about what players would do if the Big Ten is unwilling to make significant changes, because so far their conversations have been positive.

“We want to have a conversation we’ve never had before,” Clifford said. “Those three things are just the base of what we’d like to do. In reality, we think there is more that could happen. I could see a lot of changes being made moving forward. Realistically, the work force should have a voice at this point.”

Clifford first met Stahl, a former history professor at the University of Minnesota, in June. Stahl met with the Penn State football team on campus two weeks ago. He said he hopes Penn State’s players will serve as the first chapter of a nationwide association, although the bargaining efforts are for now focused on the Big Ten.

Stahl said if the Big Ten does not make significant progress on doing more for players, he believes the organization’s next step is to register as a 501(c)5 labor organization and potentially begin the process of becoming a union.

Warren and the Big Ten are reportedly on the cusp of an unprecedented financial windfall thanks to an upcoming media rights deal that experts believe could be worth more than $1 billion for the conference. Those figures are likely helped by the recent announcement that USC and UCLA are joining the Big Ten by 2024.

Clifford started meeting with Stahl before the two Los Angeles-based schools announced their plans, but he said their decision should help strengthen the players’ case to be treated as a workforce.

To register as a 501(c)(5) labor organization, members would have to vote to form a union and have their request confirmed by the National Labor Relations Board — a process that could take many months to complete. A previous attempt by Northwestern football players to unionize in 2014 was ultimately unsuccessful after the NLRB declined to rule on the case. The CFBPA would need to successfully argue that the Big Ten is a private business that serves as an employer of the players.

The NLRB is evaluating a pair of complaints filed earlier this year that argue that the NCAA should be treated as an employer of college athletes. The NLRB general counsel published a memo last year that challenged the NCAA’s stance that athletes are not employees. The NCAA is also a defendant in a lawsuit attempting to argue that players should be viewed as employees of their school.

Clifford said he spent the past month trying to learn as much as possible about Northwestern’s attempt to unionize. He said he believes the college sports landscape and public perception have changed enough in the past eight years to lead to a different outcome.

“I think this has been kind of looming for a while now,” Clifford said. “It isn’t as crazy a concept as it was in 2014. Players have rights in the way of name, image and likeness. Now it’s about having a seat at the table with the billion-dollar deals and saying, ‘Hey, we would like to talk about what we can do here.'”

On Friday, Clifford emphasized that his conversations with Big Ten leadership thus far have left him optimistic that he can be part of a group of players that creates significant change by working with Warren and the conference.