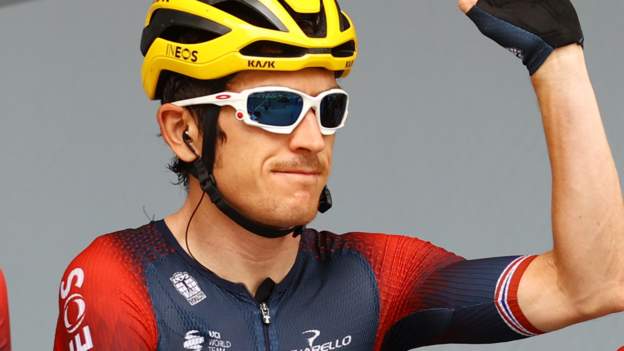 Former winner Geraint Thomas says he has “proved a few people wrong” with his performance in this year’s Tour de France.

Thomas, who won Le Tour in 2018, is all but guaranteed to finish third with two stages remaining.

“It’s really satisfying to be up there in the mix,” the 36-year-old Welshman said.

“After the last couple of years people thought I was kind of done almost.

“It’s been nice to turn it around after a disappointing end to last year.”

Thomas finished the 2021 Tour de France despite dislocating his shoulder during stage three and suffered a freak crash during the road race at last year’s Tokyo Olympics.

In addition to his win four years ago, Thomas came second to Egan Bernal in 2019 despite a run of bad luck and hopes to finish third this year.

“It would be really satisfying to be on every step I guess,” added Thomas, the first British winner of the Tour de Suisse in June.

“After the disappointing end to last year and turning it around I’m enjoying my racing this year.

“I’ve still got to finish it and I’ve got a hard TT [time trial] so I’m not counting my chickens yet.”

Denmark’s Jonas Vingegaard remains three minutes 26 seconds clear of defending champion Tadej Pogacar, with one day to go until the ride into Paris on Sunday.

“To be best of the rest is good,” Thomas said.

“I’ve been in the mix, there or thereabouts, but the last few days they’ve really showed their class and they’ve got that little bit more gas.”

A year after going all-in on their rebuild, where are the Cubs now?
Browns: Watson to start preseason opener
Kasatkina outlasts Rogers, wins title at San Jose
Nickal a Contender Series W away from UFC deal
Barcelona’s summer signings, issues explained: When can new stars play in LaLiga?