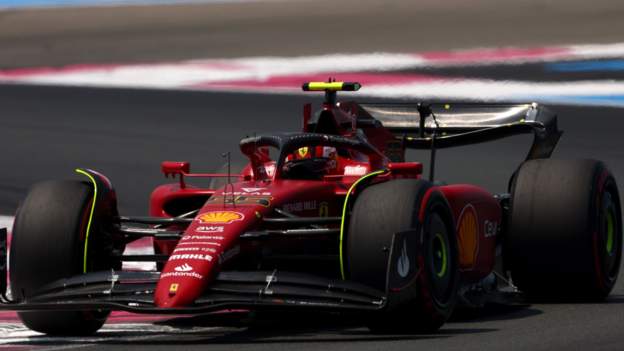 Ferrari’s Carlos Sainz will start the French Grand Prix from the back of the grid as a result of penalties for excessive engine usage.

The Spaniard’s demotion was confirmed on Saturday when Ferrari officially took a complete new engine, his fourth of the season, one more than allowed.

That was added to the new electronics control unit taken on Friday, which had already given him a 10-place penalty.

Leclerc also seemed to be struggling still with high tyre degradation, as he had on the race-simulation runs in Friday practice – while Sainz improved his time on a second lap on the ‘soft’ tyre, Leclerc complained his were “dead” when he tried.

Lewis Hamilton was fourth quickest for Mercedes – but 0.9secs off the pace on a track the team had expected to bring them a little closer to the front.

The second Red Bull of Sergio Perez was fifth fastest, a second off team-mate Verstappen, and George Russell sixth in the second Mercedes, ahead of Fernando Alonso’s Alpine, the Williams of Alex Albon and McLaren’s Lando Norris.

Haas’ Kevin Magnussen will join Sainz at the back of the grid after also changing a number of power unit components.