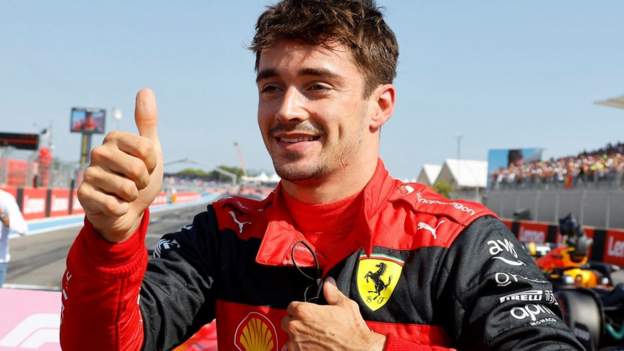 Leclerc beat Verstappen by 0.304 seconds after Sainz, who has a grid penalty, gave him a slipstream on both laps in the final session.

Ferrari nailed the slipstream tactics on the second attempt after Leclerc was only 0.008secs ahead initially.

Alpine’s Fernando Alonso headed the midfield runners in seventh, with Alpha Tauri’s Yuki Tsunoda, Sainz and Haas’ Kevin Magnussen, who starts from the back like Sainz, completing the top 10.

Ferrari took advantage of the fact that Sainz will start from the back of the grid because of a series of penalties for excessive engine usage to deploy him to assist Leclerc in the bid for pole.

At the first attempt, the slipstream tactic did not work that well, Leclerc and Sainz not quite getting their co-ordination right.

But on the second runs Leclerc picked up Sainz’s tow exiting the chicane that splits the long Mistral straight and had the slipstream all the way down through the flat-out Signes corner before Sainz moved out of the way into the Beausset double-right.

It allowed Leclerc to be more than 0.2secs quicker through the middle sector – Ferrari’s weakest part of the track – than on his previous lap, and the car’s pace in the corners of the final sector stretched him further ahead.

Leclerc said he was “surprised” Ferrari were so quick as Red Bull had appeared to have an advantage in practice.

“It was a great lap,” he said, as he celebrated his seventh pole in 12 races this year. “I struggled all weekend to put a lap together and I managed to put it. But I must say thanks to Carlos because it would have been much closer without him.”

However, Red Bull look ominous going into the race, because of the car’s obvious advantage on the straights.

Verstappen said: “Overall we were lacking a bit in qualifying, just general grip. It was a bit more tricky than I would have hoped but we still have a decent race car.

“Tomorrow will come to our favour. We are quick on the straights and we can use that.”

Both the world champion and Leclerc said they did not believe that the slipstream had been decisive.

Leclerc said: “I think it’s around 0.2secs (I gained) in the car to the lap before in the tow. So it’s significant. It would have been a lot closer. It was a nice help anyway.”

Sainz looked as if he would have had a good shot at pole had he not had his penalty – he set the fastest time in second qualifying, with a lap just 0.2secs slower than Leclerc’s ultimate pole time.

“Unfortunately the penalty comes at a point in the season when I am feeling at the best with the car,” Sainz said. “I have been all weekend very fast.

“But obviously because of the penalty the target was to get to Q3 and give the tow to Charles, which I think I did pretty well. I think it was pretty nailed. I am happy for the team.”

Norris impressed in splitting the Mercedes cars with a McLaren featuring a significant aerodynamic upgrade.

“It has been a very good day,” he said. “Before qualifying we were discussing whether we should even talk about Q3. It was very far away from what we thought we could achieve.

“But as we’ve gone through the weekend we have understood the package and upgrades more and more and how to maximise them and find the limit of it all and we did that, I think.

“I’m happy. My lap in Q3 felt like a very good lap. The kind of lap you feel like you should be on pole with.”

Mercedes had expected Paul Ricard would be one of the tracks that would bring them closer to the front and they had a small upgrade with a revised nose and front wing.

The two were closely matched for lap time until the final runs, when Hamilton beat Russell by 0.366secs.

But the cars were further off the pace than at either of the past two races.

“I am really happy with where I got the car considering I missed P1 (to allow reserve driver Nick de Vries to have a run) and my last qualifying lap was a beautiful lap. It was just miles off,” Hamilton said.