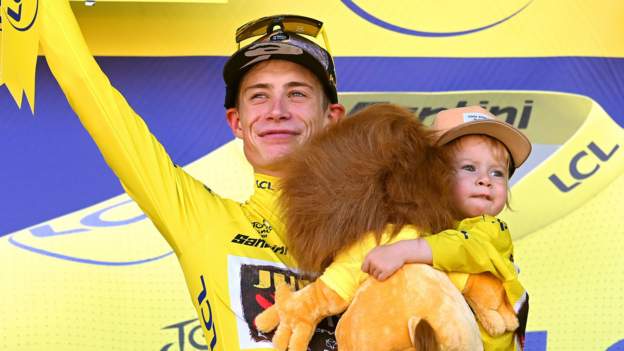 Jonas Vingegaard is set to win the 2022 Tour de France after finishing second to Wout van Aert in the stage 20 time trial on the penultimate day.

Van Aert clocked 47 minutes 59 seconds to finish 19 seconds ahead of his Jumbo-Visma team-mate.

Denmark’s Vingegaard, 25, now has an overall advantage of three minutes and 34 seconds on Tadej Pogacar.

“It means everything to me,” said an emotional Vingegaard. “It’s really incredible. It’s hard for me to put words on it. It’s the biggest win in cycling.

“Since last year [when he came second], I always believed I could do it. It’s a relief that I did. I’m just so happy and proud.”

Vingegaard began the day with a lead of three minutes 26 seconds over defending champion Pogacar – with the 40.7km solo route from Lacapelle-Marival to Rocamadour standing between him and a first Grand Tour triumph.

But rather than just protect his overall lead on Saturday, Vingegaard was able to extend it – and he even appeared on course for the stage victory as he passed the third and final intermediate check point two seconds faster than Van Aert.

“What happened two years ago, we always thought about it and we didn’t want it to happen again,” Vingegaard said.

“We just wanted to go for it today. [The emotion] just shows how close everyone is in this team. It’s a special thing we have.”

Van Aert said: “I’m emotional. Today it was like a dream scenario. I thank all my team-mates and the whole team for those special three weeks, it’s unbelievable.”

Pogacar had to settle for third place, 27 seconds down on green jersey-wearer Van Aert but five seconds faster than 2018 champion Thomas.

Thomas’ Ineos Grenadiers team-mate and world champion Filippo Ganna led the way for a long period but he had to settle for fifth, while Britain’s Fred Wright, 23, produced a notable performance to finish eighth on the day.

There were changes in the top 10 as Aleksandr Vlasov rose from seventh to fifth, above both Nairo Quintana and Louis Meintjes, while the latter dropped below Romain Bardet to eighth.

“It’s been a good three weeks, with many ups and downs, with lots of bad luck for my team, but the battle between me and Jonas for the yellow jersey has been very special,” Pogacar said.

“I think we have some very interesting next two or three years ahead of us. Jonas has stepped up his game this year. I’m motivated and looking forward to the next challenges.”

The 109th Tour concludes with a traditional processional final stage in Paris on Sunday, before the sprinters fight for victory on the iconic Champs-Elysees finish.