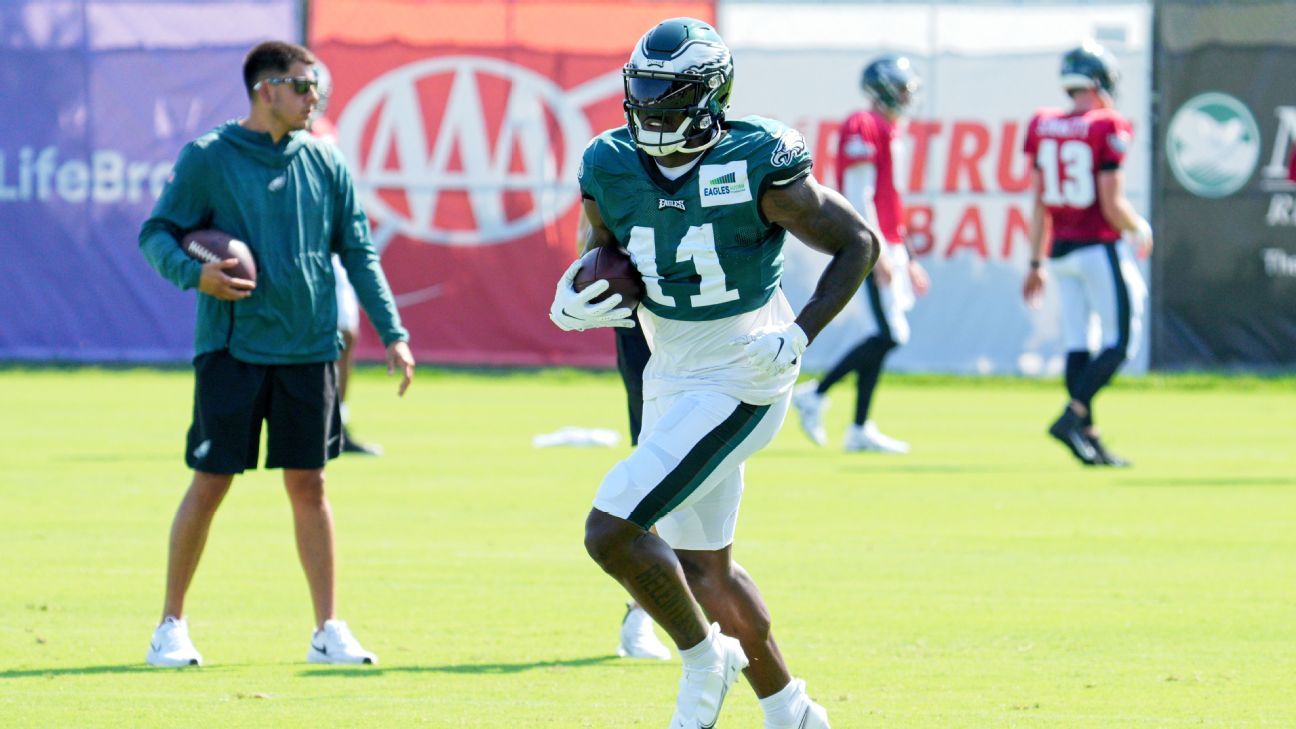 The 2022 NFL training camps continued on Thursday with action around the league. Offenses and defenses worked in one-on-ones, and quarterbacks took steps forward in building chemistry with new receivers. Can A.J. Brown be the receiver Philadelphia has been looking for? And will Marquez Valdes-Scantling get on the same page with Patrick Mahomes and help fill the void left by Tyreek Hill?

Playmaking defensive backs put on a show, too, creating highlight-reel turnovers in team drills — including a Titans safety who hauled in a pick and then was honored by his alma mater. But it wasn’t all super serious work on Thursday: One team broke out a hose for their annual slip ‘n’ slide drill, testing rookies’ abilities to scoop up loose fumbles in slippery conditions.

Camps dominated the day, but preseason game action kicks off on Thursday night, as the Jacksonville Jaguars face the Las Vegas Raiders in the Hall of Fame Game in Canton, Ohio (8 p.m. ET on NBC). It’s the first game of the preseason, and the only one until two more kick off next Thursday.

Here’s what you need to know from camps across the league.

Jump to:
News | Photos and videos
What our reporters saw

Top NFL news of the day

Steelers, WR Johnson agree to two-year extension: The Pittsburgh Steelers and wide receiver Diontae Johnson reached agreement on a two-year extension that averages $18.355 million per year, sources told ESPN’s Adam Schefter and Kimberley Martin. The extension is worth up to $39.5 million if he reaches incentives and includes $27 million guaranteed, a source told Schefter.

Philadelphia Eagles: If the regular season is anything like training camp, receiver A.J. Brown is going to see a ton of targets. He has been Jalen Hurts‘ go-to option through six practices, especially on Thursday with DeVonta Smith sidelined with a groin injury. It has been a lot of quick strikes from Hurts to Brown in an effort to allow the new Eagles receiver to create after the catch. A good example came during team drills, when Brown split a pair of defenders and sprinted into the end zone after grabbing a well-placed ball from Hurts across the middle. — Tim McManus

Kansas City Chiefs: Marquez Valdes-Scantling, one of the Chiefs’ major free-agent signings, dropped a pair of deep passes from Patrick Mahomes during an abbreviated practice session. Drops had been a thing for Valdes-Scantling in camp even before Thursday. But he later redeemed himself by catching a deep ball from Mahomes that was slightly underthrown. The two failed to hook up on a fourth attempt down the field when Mahomes’ pass was overthrown. — Adam Teicher

Tennessee Titans: Titans safety Kevin Byard had a really good day. He stopped tight end Austin Hooper and rookie wideout Kyle Phillips during one-on-ones, then ended Ryan Tannehill‘s six-day streak without throwing an interception during a two-minute drill in the team period. The veteran safety said he read Tannehill’s eyes and picked off the pass intended for Hooper in the seam. The good day turned great when his alma mater, Middle Tennessee State University, was on hand with a surprise announcement that his jersey number will be retired this season. Byard’s jersey will be the second number retired in the program’s history. — Turron Davenport

New Orleans Saints: Second-year cornerback Paulson Adebo continued to shine at practice on Thursday. He has made plays all throughout camp, and on Thursday, he had an interception in one-on-one drills while going up against receiver Jarvis Landry. Adebo juggled the pass from Jameis Winston and hauled it in with one hand. Thursday also saw the return of second-year defensive end Payton Turner, who missed two practices this week with an undisclosed injury. Turner batted down a pass at the line of scrimmage while working with the third team in 11-on-11 work at the end of practice. And while receiver Michael Thomas got a day off, tight end Taysom Hill took the next step forward after injuring his ribs on the second day of camp, working off to the side with other players who are rehabbing injuries. — Katherine Terrell

New England Patriots: The Patriots began their full-pads practice with the annual slip ‘n’ slide for rookies. Longtime captain Matthew Slater had the hose, and rookies had to pounce on a fumble on a slick patch of a grass while being doused. First-round pick Cole Strange, the left guard from Chattanooga, loved it on a near 100-degree day. “I feel like I practiced better today. Maybe we should do it more often,” he cracked. — Mike Reiss

Indianapolis Colts: The Colts had their most intense period of training camp thus far, finishing Thursday’s practice with a physical, full-squad, two-minute drill that was thoroughly dominated by the defense. In two possessions, the starting offense was held to three points against the starting defense. On the first series, the offense went three-and-out after pass deflections by cornerback Stephon Gilmore and safety Julian Blackmon, and a third-down sack from defensive end Yannick Ngakoue. On the second series, Gilmore flattened rookie Alec Pierce on a pass attempt, and defensive tackle DeForest Buckner collapsed the entire middle of the offensive line to stuff a third-down play. “A lot of good film for us to coach off of and get better,” offensive coordinator Marcus Brady said. — Stephen Holder

Arizona Cardinals: Cardinals coach Kliff Kingsbury has said all camp that second-year wide receiver Rondale Moore will have a larger role in Arizona’s offense. Moore showed why on Thursday. He repeatedly beat defenders either off the line or in a foot race for deep balls. His speed will be a major component of the Cardinals’ scheme in 2022 in all areas, from behind the line of scrimmage to downfield. — Josh Weinfuss

Buffalo Bills: Things escalated early during the Bills’ 11-on-11 period on Thursday when second-year edge rusher Greg Rousseau tried to strip the ball from receiver Stefon Diggs after a short completed pass from quarterback Josh Allen. Diggs didn’t take too kindly to Rousseau’s attempt, making further contact with Rousseau, who proceeded to slap Diggs on the helmet. A skirmish then broke out, with defensive tackle Ed Oliver and Diggs eventually being separated. Oliver was held back by multiple defensive players, including Von Miller for a short while. Miller said after practice, “I don’t like saying that O-word. I don’t like saying old, but when it comes to fighting out there on the field, that is past my time, man. It really is. … That is past me. Today, I tried to break up Ed, and I tried to stop him from something, and he just pushed me out of the way. I was like, see, that’s why I just need to chill and step back and let these guys do what they’re going to do.” — Alaina Getzenberg

Denver Broncos: For the first time since training camp opened, the Broncos worked a full-blown two-minute-drill situation Thursday. Coach Nathaniel Hackett gave the offense almost a full field to cover with 1:45 left and a touchdown needed. After a choppy start, Russell Wilson got things moving, including a 10-yard completion to Jerry Jeudy on a third-and-14, following by a big completion up the left sideline to Courtland Sutton on fourth-and-4 that put the Broncos in the red zone. Wilson tossed a touchdown pass one play later. “We’ve got a long way to go,” said Hackett. “But it was good to see.” — Jeff Legwold

Green Bay Packers: Aaron Rodgers may have gotten some eye rolls when he compared Rasul Douglas to a certain Hall of Fame defensive back, saying: “He reminds me a lot, in the deepest respect, of Charles Woodson. He has incredible ball skills. He baits you at practice. He has the competitive fire that Charles did.” But as if to keep Douglas humble, Rodgers went after him a few times in practice on Thursday. He threw a crosser to Allen Lazard and then pulled off the play fake of all play fakes on a rollout and hit Lazard again. Both times Douglas was in coverage. “Sometimes I’ll put myself out of position to get in position just because of him,” Douglas said. “Most of the time, it doesn’t work. But you’ve got to give it a shot.” Douglas, who led the Packers last season with five interceptions despite not joining the team until October, is doing something else Woodson did — move to the slot position. — Rob Demovsky

Dallas Cowboys: Injuries are a part of training camp but not usually for family members. During pre-practice warmups for the kickers, the aunt of punter Bryan Anger was struck by a football off the leg of either Lirim Hajrullahu or Jonathan Garibay that made it into the family-area hospitality tent behind the goal posts. “I don’t know who it was,” the Pro Bowl punter said, “but I’ll get revenge later.” He was joking, and he said his aunt — who made the trip over to Oxnard, California from Ojai — was good after checking on her during practice. “A nice little welcome gift,” Anger said. “It’s a good little story I guess for later.”— Todd Archer

As 1-on-1 WR/DB drills keep rolling in camp, I asked Bengals CB Mike Hilton to describe why they’re in the offense’s favor: pic.twitter.com/xiuLeTK4di

It’s RARE to MEAT a coach with so much at STEAK in his players 🥩 pic.twitter.com/EeBiVwjgo4

Blessing your TL with a Vita Vea mic’d up on this fine Thursday. 🎙️

How we need the @12s to pull up to Lumen on Saturday: pic.twitter.com/pcCstjvOB6