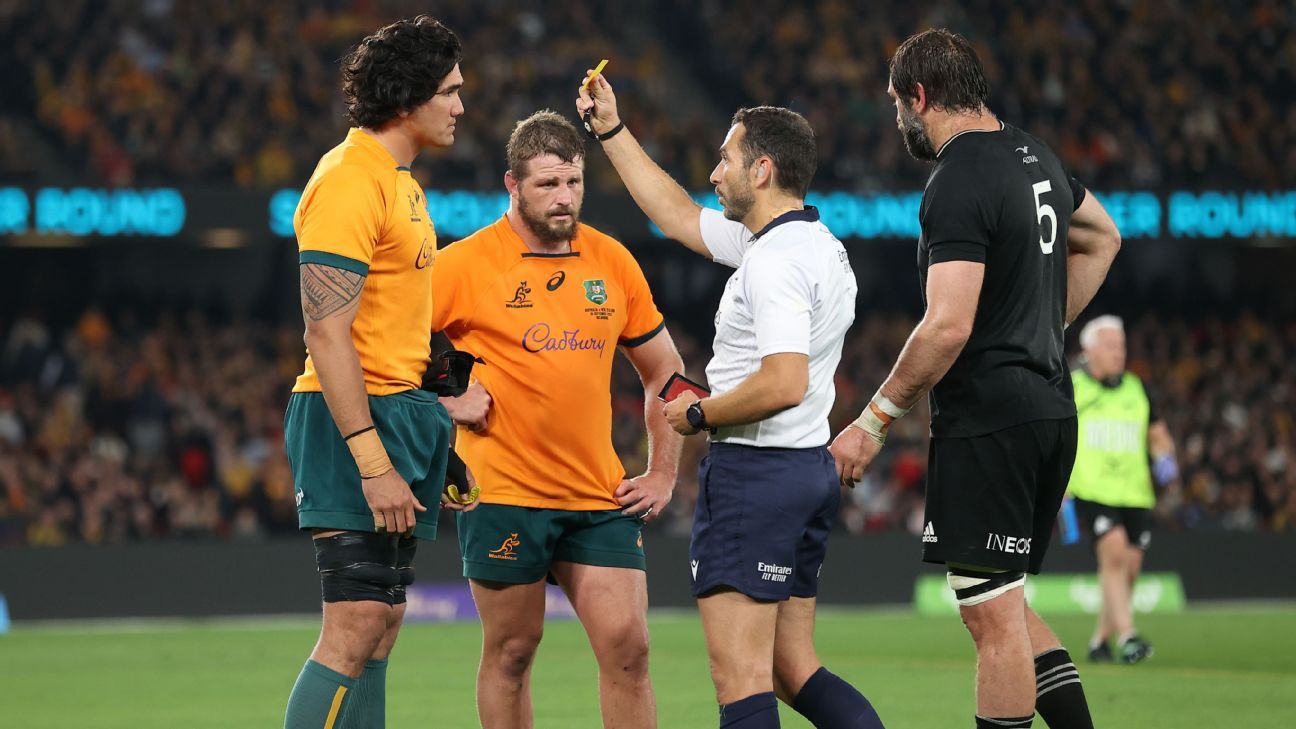 Australia’s Darcy Swain has been suspended for six weeks for the Bledisloe Cup incident that left New Zealand’s Quinn Tupaea with a bad knee injury.

Swain, who received a yellow card at the time, was cited after the match at Melbourne’s Marvel Stadium last week.

The ban imposed by a SANZAAR Judicial Committee hearing will extend to 6 November ruling Swain out of Saturday’s return, and the tour matches against Scotland at Murrayfield on October 30 and France in Paris on 6 November.

He will also miss next month’s Australia A tour of Japan, the squad for which he was controversially named in this week in what some felt was a ploy to ‘use up’ his suspension. By making the ban time-, rather than match-related, that issue has been negated.

Swain was found guilty of contravening Law 9.11 – “Players must not do anything that is reckless or dangerous to others”

In its findings, the Judicial Committee chair, Andre Oosthuizen SC ruled the following:

“Having conducted a detailed review of all the available evidence, having heard from the player and from his legal representative, Aaron Lloyd, the Judicial Committee upheld the Citing and deemed the incident meet the red card threshold for Law 9.11.”

“With respect to sanction the Judicial Committee deemed the act of foul play merited a mid-range entry point of six (6) weeks. Through the actions by the player such as position, control, and player movements they found the incident was not intentional, however, it was highly reckless.”

Asked about Swain’s ban on Thursday, All Blacks coach Ian Foster said he was satisfied with the judicial process.

“It is what it is,” Foster said. “We spoke after the game and basically said there’s a process that people go through, we’re fully aware of that, we go through that ourselves, so he’s got what he’s got…I haven’t read the judiciary [report], but clearly he’s gone through a process and that’s what they’ve come up with.”

Asked whether Swain should have been allowed to use Australia A matches as part of his ban, Foster again remained diplomatic.

“I’ve been through a lot of judiciary processes, there’s a lot that happens in there, I don’t know what they’ve actually come up with,” he said. “But I’m sure they’ve been consistent with what they’ve done in the past, either way…but it seems to me that they’ve come up with a pretty satisfactory answer.”

Wallabies coach Dave Rennie will likely speak on the suspension when he announced his own team on Thursday, but the Kiwi said he didn’t think Swain’s cleanout was intentional immediately after last Thursday’s Test.

“I’m not convinced about Darcy’s [yellow card],” Rennie said. “It was certainly nothing intentional. Ironically, he got neck-rolled prior to him cleaning out, but that wasn’t picked up.”

In better news for the Wallabies Cadeyrn Neville has made a full recovery from his knee injury picked up against England and will start in the second row in Auckland.