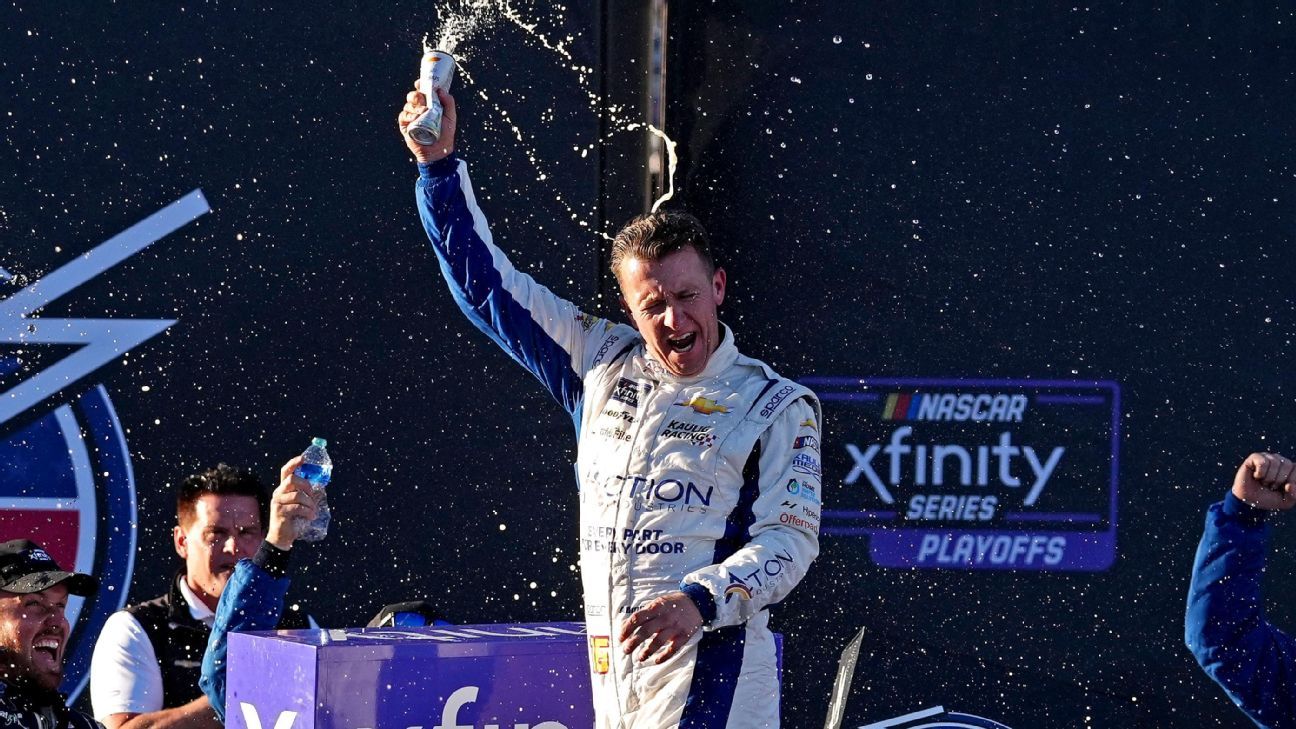 TALLADEGA, Ala. — AJ Allmendinger finally won his first race on a superspeedway with a last-lap pass that allowed him to beat Sam Mayer to the Talladega Superspeedway finish line by less than three feet.

Allmendinger’s fourth Xfinity Series win of the season locked him into the next round of the playoffs and afforded him the luxury to not hold back in next week’s elimination race on The Roval at Charlotte Motor Speedway, where Allmendinger is 3-for-3 in his career.

But he’d never been as fortunate on superspeedways until Saturday, when he denied Mayer his first career Xfinity Series victory by 0.015 seconds. Allmendinger three previous times was the leader at a superspeedway at the white flag but could never close out the win.

He openly complains about the style of racing at superspeedways, and his feelings had not changed after Allmendinger drove from third to first on the final lap.

“Still hate it. Still hate it. Gosh, we’ve been so close to winning one and I feel like I keep giving them away,” Allmendinger said. “I just wanted to win a superspeedway, finally got it.”

Allmendinger credited the studying he’s done of past superspeedway races and his Kaulig Racing teammates, particularly Landon Cassill, who pushed him to the win. He said he was content sitting in third until it was time to make his move on Mayer and knew that Cassill would give him the assist.

Cassill and Daniel Hemric rushed to the frontstretch to embrace their teammate and douse Allmendinger with water in celebration.

“All credit to Landon Cassill. He kept shoving me. He stuck with me,” Allmendinger said. “Landon, I wish he could share it with me, well, he’s going to share it with me. But I wish we could both be the winner because he deserves it more than I do.”

Allmendinger’s victory snapped a streak of four consecutive Xfinity Series wins by Noah Gragson, who tied Sam Ard’s 1983 record of consecutive wins last week. Gragson, who finished 10th, is also locked into the next round of the playoffs.

Cassill finished third and was followed by Ryan Sieg, Josh Berry, Parker Kligerman, Ty Gibbs and Hemric as Kaulig put all three of its Chevys in the top eight.