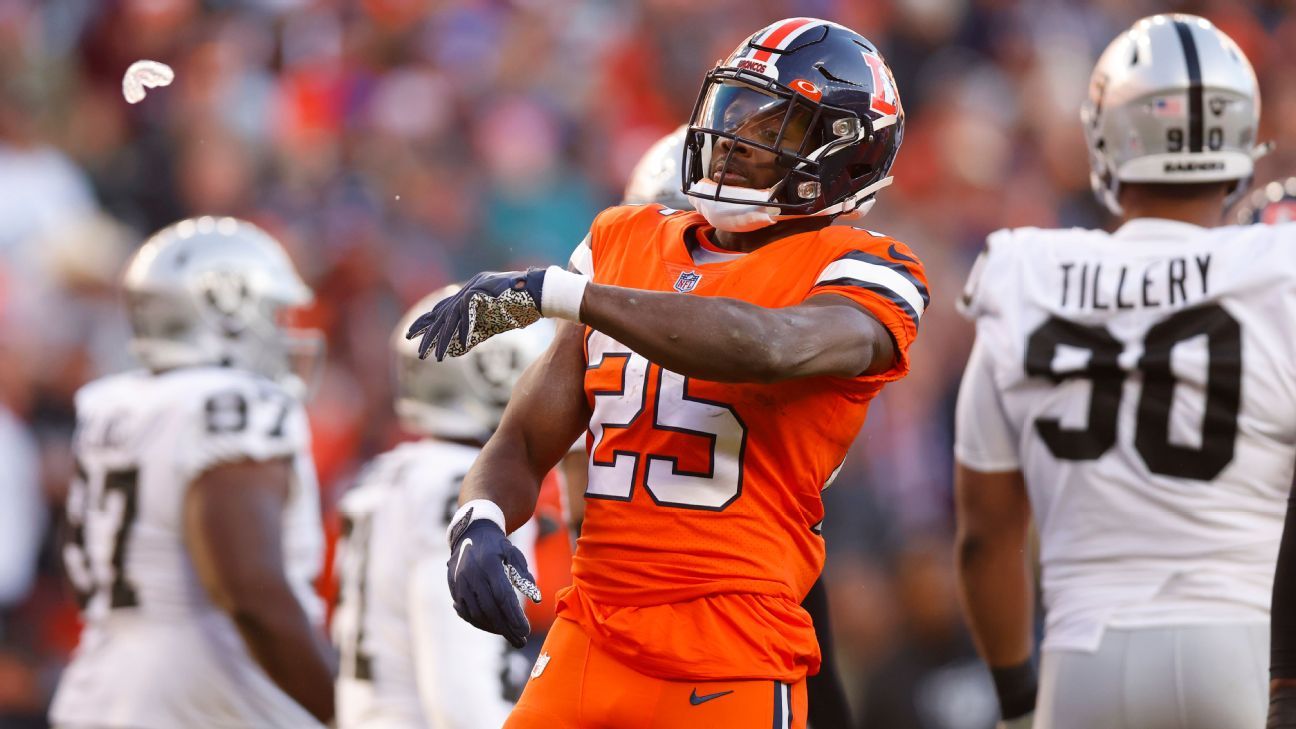 ENGLEWOOD, Colo. — The Broncos waived running back Melvin Gordon III on Monday after he fumbled Sunday — for the fifth time this season — in an overtime loss to the Raiders, Denver’s sixth loss in seven games.

After the game, Broncos coach Nathaniel Hackett called the lack of points on the drive “unacceptable.”

“We can’t do that,” Hackett added. “We have to score a touchdown, at least get a field goal. We didn’t come away with either, so that’s frustrating.”

It was Gordon’s second fumble this season at the opponent’s 2-yard line or closer to the goal-line. Gordon fumbled at the Seattle Seahawks‘ 1-yard line in the Broncos’ season-opening 17-16 loss.

Gordon’s fumble in a Week 4 loss to the Raiders was returned for a touchdown.

“I was sick about it, obviously,” Gordon said after Sunday’s loss. “I kind of know what comes after that at this point. I shot my own self in the foot. I am a little salty because I was feeling it [Sunday]. That happened and I kind of knew that I was going to have to find a way to get back in rhythm. I knew it was going to be tough. I tried to make splashes here and there after it but my share of opportunities kind of dwindled after that, so that’s my fault.”

Since Javonte Williams suffered a season-ending knee injury in Week 4, Gordon has bristled at times about his role in a struggling offense — the Broncos are last in the league in scoring at 14.7 points per game. After Sunday’s fumble, Gordon didn’t get another carry until there was 13 minutes, 28 seconds left in the fourth quarter.

Latavius Murray, 32, was signed off the New Orleans Saints practice squad Oct. 4 and has led the team in rushing attempts (63) since despite having played one fewer game than Gordon over that span. The Broncos also signed Marlon Mack to the roster earlier this month, but he does not have a carry.

Gordon’s ouster comes as running back Chase Edmonds, who the Broncos acquired as part of the trade of outside linebacker Bradley Chubb to the Miami Dolphins, suffered a right ankle injury Sunday and left the stadium wearing a walking boot on his lower right leg and ankle. Edmonds is expected to miss several weeks with the injury, a source told ESPN.

Gordon played 41 games for the Broncos over the last three seasons, scored 22 total touchdowns (19 rushing, three receiving), but also had 12 total fumbles in that time, nine of those recovered by the Broncos’ opponents.