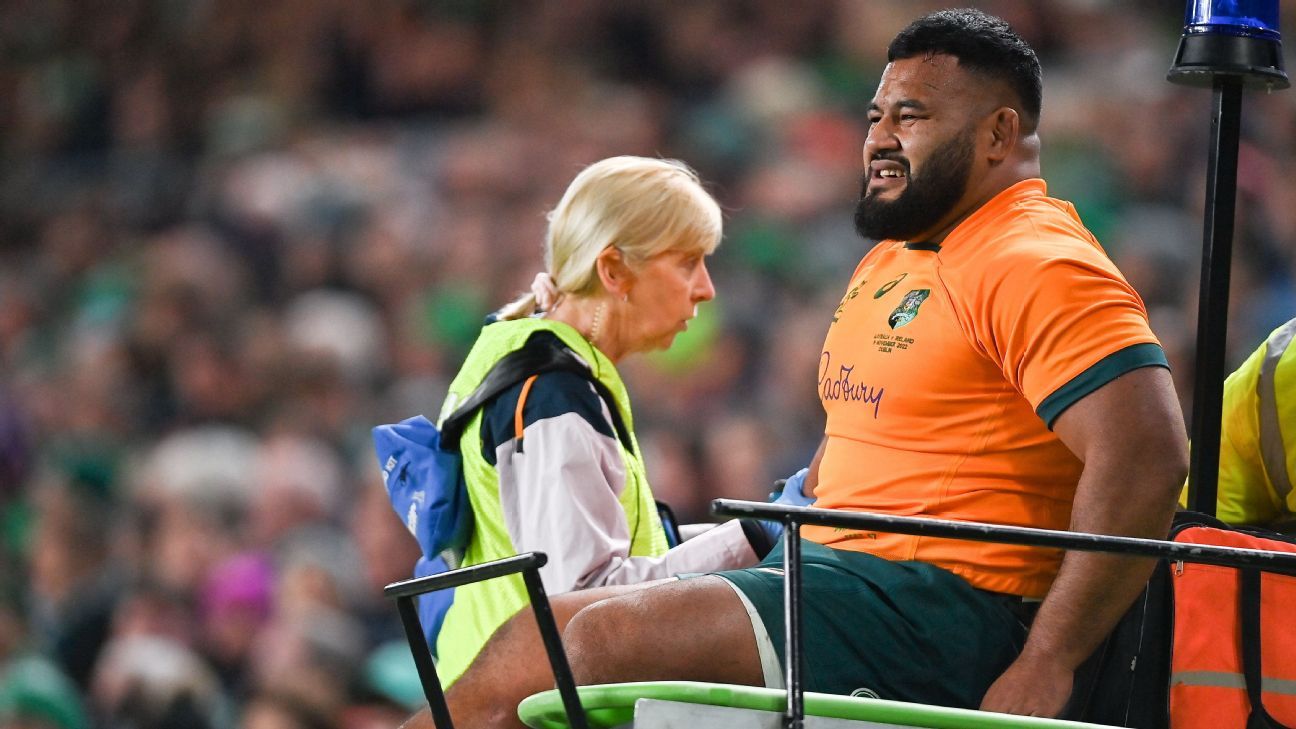 The Wallabies insist their massive injury toll, with top prop Taniela Tupou now in possible danger of missing the Rugby World Cup, comes down to bad luck and the perils of a collision sport.

Tupou was stretchered off in the second half of their 13-10 loss to Ireland in Dublin with a suspected Achilles tendon injury.

Untouched, the burly prop fell to the ground clutching his leg as he attempted to cart the ball up.

If the tendon is ruptured Tupou faces a minimum nine-month recovery, putting his chances of playing in next year’s global showpiece in France in jeopardy.

He was one of five Australian casualties from another tight loss, with all confirmed to be returning home ahead of the Wallabies closing Tests against Wales.

Hunter Paisami suffered medial ligament damage in the opening minutes, leaving Australia without a specialist inside centre for the Cardiff Test.

Outside back Andrew Kellaway (toe) and No.8 Rob Valetini (ankle) were forced off during the second half while hooker Dave Porecki was concussed.

Halfback Nic White also suffered a head knock but surprisingly passed his HIA to return to the field.

“After initially being passed of his HIA by the independent Match Day Doctor, Nic White’s criteria two HIA (where diagnosis not immediately apparent) has been upgraded to a criteria one assessment (balance disturbance) post-match and will also serve a 12-day stand down period,” a Wallabies spokesperson said. “White was not exhibiting any symptoms of concussion post-match or the following day.”

Fullback Tom Banks, who broke his arm earlier this year, already returned home from the tour with an ankle injury as did Lalakai Foketi with a leg fracture.

But Wallabies coach Dave Rennie said it was part of playing a contact sport, plus some bad luck.

“Hunter got his leg caught under him – that’s footy,” the coach said.

“Porecki got a shoulder to the head, that’s bad luck, I’m not even sure how or what Kells (Kellaway) has done.

Rennie said he would have to work through his squad to field a line-up for Wales, with lock Will Skelton and five-eighth Bernard Foley unavailable as the match falls outside the international window.

He said he would call on a number of players who took part in their historic loss to Italy.

“We’ll have to go into the depth of the squad again,” Rennie said.

“I can guarantee there will be guys itching for another opportunity after the Italy effort.”