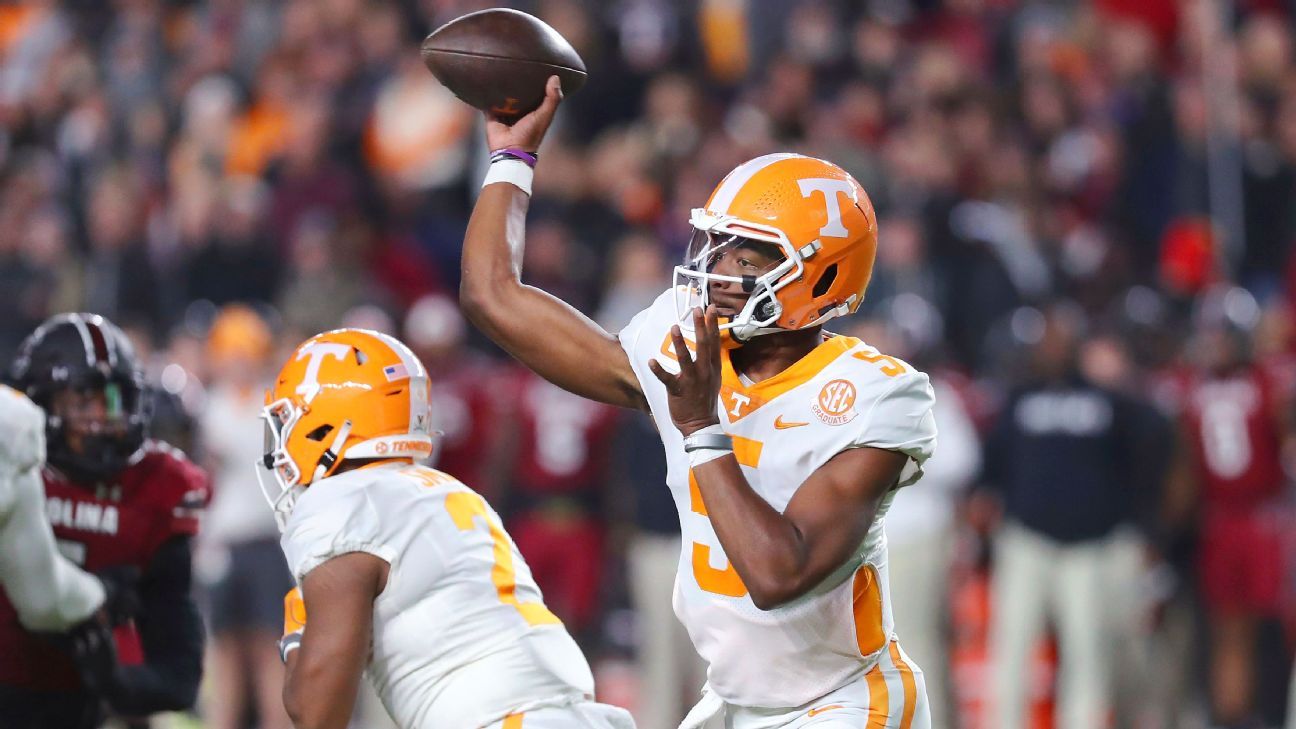 Tennessee quarterback Hendon Hooker tore the anterior cruciate ligament in his left knee during Saturday’s 63-38 loss to South Carolina and will miss the remainder of the season.

Team officials feared the worst Saturday after Hooker was injured in the fourth quarter, and the school announced the news Sunday.

“Hendon and the Hooker family appreciate all of your prayers and support,” the team said in a post on Twitter. “Hendon’s incredible journey has been defined by faith, perseverance and strength. Obstacles have never stood in the way on his path to greatness. Forever a Tennessee legend and the ultimate teammate, we know Hendo will come back stronger than ever as he embarks on a promising NFL career. Thank you, Hendo.”

Hooker, a 24-year-old senior, was one of the favorites for the Heisman Trophy for much of this season. He suffered the non-contact injury while rolling left on an option play, and his leg seemed to get stuck in the turf at Williams-Brice Stadium. Hooker lost control of the ball and immediately went to the ground. He was helped off the field and then limped gingerly to the locker room with the help of the training staff.

A two-year starter for the Vols, Hooker was a driving force in Tennessee’s turnaround under second-year coach Josh Heupel after transferring from Virginia Tech. He passed for 3,135 yards and 27 touchdowns and threw just two interceptions this season. He ranks ninth nationally in total offense (and first in the SEC) with an average of 324.1 yards per game.

A year ago, in his first season at Tennessee, Hooker won the starting job in Week 3 and finished with 2,945 passing yards and 31 touchdowns while throwing just three interceptions. He also rushed for nine touchdowns.

Heupel told ESPN earlier this month that Hooker was playing as efficiently as any quarterback he’d ever been around.

“It’s fun to watch, how everyone else rallies around him and the command he has out there of our offense,” Heupel said. “Sometimes he makes it look easy, but it’s his attention to detail, his work ethic and competitive spirit that make him so special. He’s somebody they’re going to remember around here for a long time.”

Hooker was the heartbeat of a Tennessee team that started out 8-0 and was ranked No. 1 in the first College Football Playoff rankings. But the Vols lost that next week to Georgia on the road and then Saturday to the Gamecocks.

With Hooker sidelined, Tennessee will turn to Joe Milton III at quarterback Saturday against Vanderbilt. Milton, a transfer from Michigan, started in the first two games a year ago for the Vols before Hooker beat him out for the job. Milton finished the game against South Carolina after Hooker was injured and threw a 21-yard touchdown pass to Cedric Tillman in the final minutes of the game.