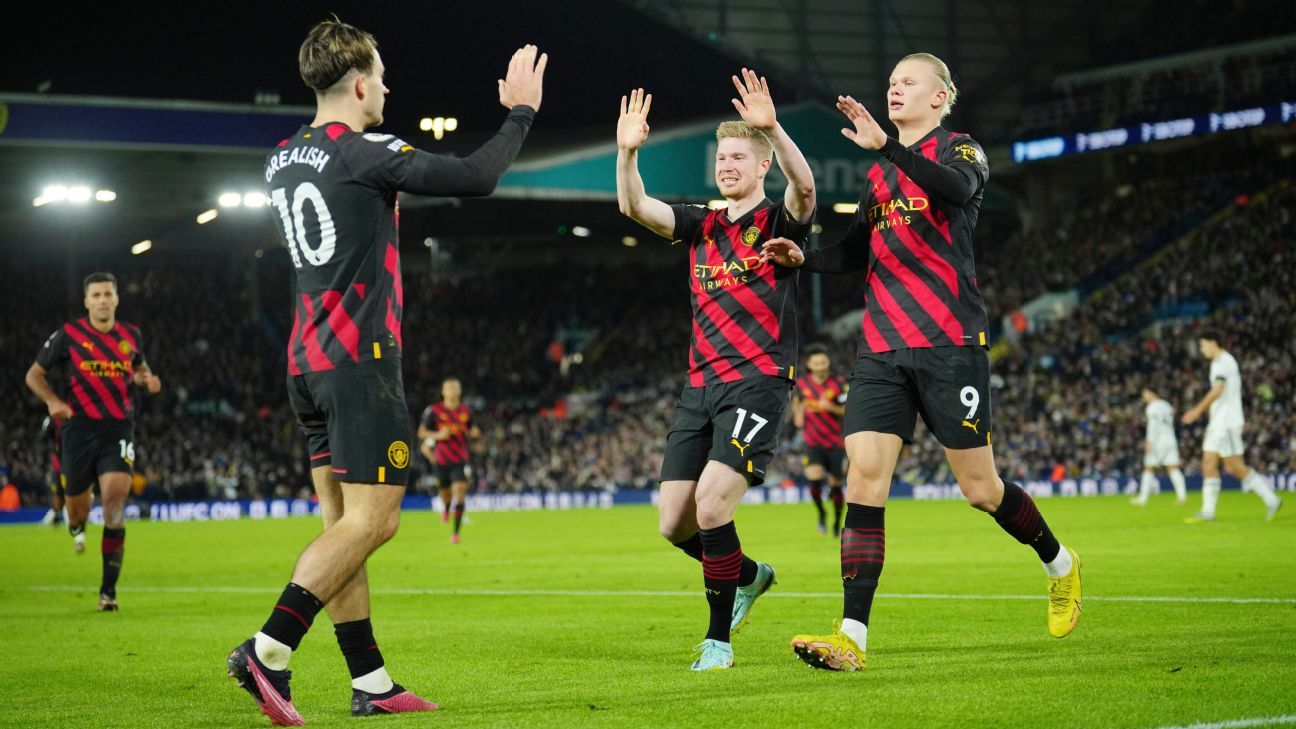 LEEDS, England — Erling Haaland became the first player to score 20 Premier League goals in a season before January by hitting two against his hometown team Leeds on Wednesday as Manchester City won 3-1 at Elland Road.

With league leaders Arsenal beating West Ham on Monday, it was crucial that City maintained the pressure on Mikel Arteta’s Gunners with a win against Jesse Marsch’s Leeds.

Rodri‘s opener and Haaland’s double were enough to seal the three points before Pascal Struijk headed in a late consolation goal for Leeds.

Manchester City made a winning start to their post-World Cup Premier League campaign and sent a clear warning to league-leaders Arsenal that the Citizens are ready to mount a surge for the title in the second half of the season.

Having suffered a 2-1 defeat at home to Brentford in their final game before the shutdown for Qatar 2022, City had fallen five points behind the Gunners in second place on the Premier League table.

But with Pep Guardiola’s team attempting to become only the fifth club in English football history to win three successive titles — Huddersfield, Arsenal, Liverpool and Manchester United (twice) are the only clubs to do so — City responded to Arsenal’s 3-1 win against West Ham two days ago by beating Leeds comfortably.

With City still to play Arsenal twice in the Premier League, the odds seem to be in City’s favour due to their greater experience and depth.

The win at Leeds underlined City’s title-winning pedigree with Guardiola’s players patiently waiting for the breakthrough after failing to take a series of first-half chances. Rodri‘s goal in first-half stoppage time was the key moment before Erling Haaland struck twice in the second-half to make the game safe before Pascal Struijk replied for Leeds.

City have been down the title path on so many occasions in recent years that they know what it takes to go the distance. Arsenal, without a title since 2004, are in unknown territory with Arteta and his players all striving to win their first title.

But with City winning so comfortably against Leeds, Arsenal will have got the message that they must overcome a formidable rival to end their long wait to be champions again.

2. Grealish frustrates for City, but persistence pays off

Jack Grealish registered his first assists of the season in all competitions for Manchester City when he teed up Erling Haaland for the team’s second and third goals at Elland Road, and they were positive moments that the 27-year-old earned the hard way.

Grealish, still the most expensive English player of all-time following his £100 million transfer from Aston Villa in 2021, has struggled for consistency during his time at the Etihad, and his first-half against Leeds encapsulated his City career to date.

The England winger was at the heart of everything, good and bad, as City pushed forward in search of an opening goal and he missed three clear chances to score in the opening 45 minutes.

There were also over-delayed passes, runs by teammates that he failed to spot and a series of challenges by Leeds defenders which regularly crossed the line.

Few players win as many free-kicks as Grealish, and that is because he draws so many fouls from opponents — but it can be a tough existence to be targeted so often, especially when referees let so many of the tackles go unpunished, as Stuart Attwell did in this game.

By the time he re-appeared for the second-half, Grealish could have been forgiven for losing his appetite for the ball, but he persevered and was rewarded with his two assists for Haaland.

Pep Guardiola will argue that Grealish needs to do more and do it consistently, but nobody can question the player’s determination.

3. Aaronson given an impossible task for Leeds

Brenden Aaronson must have groaned inside when Leeds manager Jesse Marsch asked him to play in a false nine role against Manchester City.

The USA midfielder is no striker — physically he just doesn’t match up to City defenders John Stones and Manuel Akanji — and his best role is attacking from midfield or from the right wing.

But with Leeds hit by injuries and leading forward Patrick Bamford still not fit, Aaronson was given the impossible job of trying to make life difficult for City and, at the same time, even attempt to get on the scoresheet.

Aaronson doesn’t lack for effort, but he looked completely out of his depth in a role that he was clearly unfamiliar with and when a chance did come his way, he blazed it over the crossbar.

Still, the former FC Salzburg forward can’t be blamed for his team’s lack of cutting edge against the champions. He just didn’t have the tools to give City any problems.

Italy international Wilfried Gnonto was Leeds’ biggest threat with his trickery and pace down the left, but without a target man to aim for, Gnonto’s work came to nothing.

It doesn’t always happen for Grealish, but his perseverance paid off at Elland Road with a match-winning second-half performance.

Scored a late goal for Leeds, but the full-back was at centre of every calamitous situation that his defence experienced — and there were plenty of them!

After a relatively tight first 45 minutes in which each side failed to put away chances, Leeds United looked to be headed for the break with a chance against a team 12 places higher on the Premier League table.

But then Rodri went ahead and scored just before the halftime whistle was due to sound.

Rodri scores for Manchester City just before the half!

After the break, Man City picked up where they left off, with Jack Grealish capitalising on a mistake at the Leeds’ back to gift Erling Haaland a tap-in on goal.

Down 2-0, Leeds looked to be out of it, much to the dismay of manager Jesse Marsch.

An error at the back for Leeds leads to a tap in for Erling Haaland to double Manchester City’s lead!

Haaland then scored his second, to put Man City up 3-0, but Leeds didn’t give up.

Struijk(ing) it home! Leeds are on the board 😤

Leeds United manager Jesse Marsch on whether he had hope once Leeds pulled one back: “The thing we know about our team is that we never quit. So, the timing of the goals were painful, right? If we could get to into the half, then maybe we can make a couple of adjustments and find a way to push the game. I thought in many moments — it’s Man City, in many ways for me the best team in the world with one of the best coaches in the world, so you can’t contain them entirely, but I thought we did a pretty good job.”

Marsch on the balance of needing to learn hard lessons but getting the points to stay up: “That’s the challenge. (laughs) First of all, the expectation of our fans is this is a high-level Premier League team and they want a winner. The league is so competitive, every moment of every game is so vital, and our ability to concentrate and be disciplined and play the way we want and still have intensity and play with quality in all phases — man, what a big challenge. I’m challenging them to grow and get better, and it’s also a big challenge for me as a manager to find ways against the best teams and best coaches in the world, to find ways to be who we want to be.”

Man City forward Erling Haaland on his reaction when he misses a chance to score: “To be honest, I get really pissed. That’s the truth. But when I miss, I want to score even more. That’s the funny thing — when I score one, it’s such a good feeling I want to score another goal.”

Haaland on Man City adapting to his style of play rather than the other way around and being integrated into the team: “It’s a fantastic first half-year to work with Pep and work with such amazing players, and not only the coaching staff and the players but the medical staff has been working so good for me to fix my body. I’ve been having some small problems but now it’s getting much better and it’s been a pleasure honestly to work with these guys and improve my game because I’m still young and that’s something I want to do — I want to improve and I want to become better. Of course everyone has opinions on how you can fit into this team or that, but what can I do? I cannot not do anything about that. I just have to do my thing, basically.”

Leeds United: The Peacocks have a quick turnaround for a New Year’s Eve face-off at Newcastle at 10 a.m. ET on Dec. 31.

Manchester City: The Citizens also have a quick turnaround for a New Year’s Eve date, hosting Everton at 10 a.m. ET on Dec. 31.