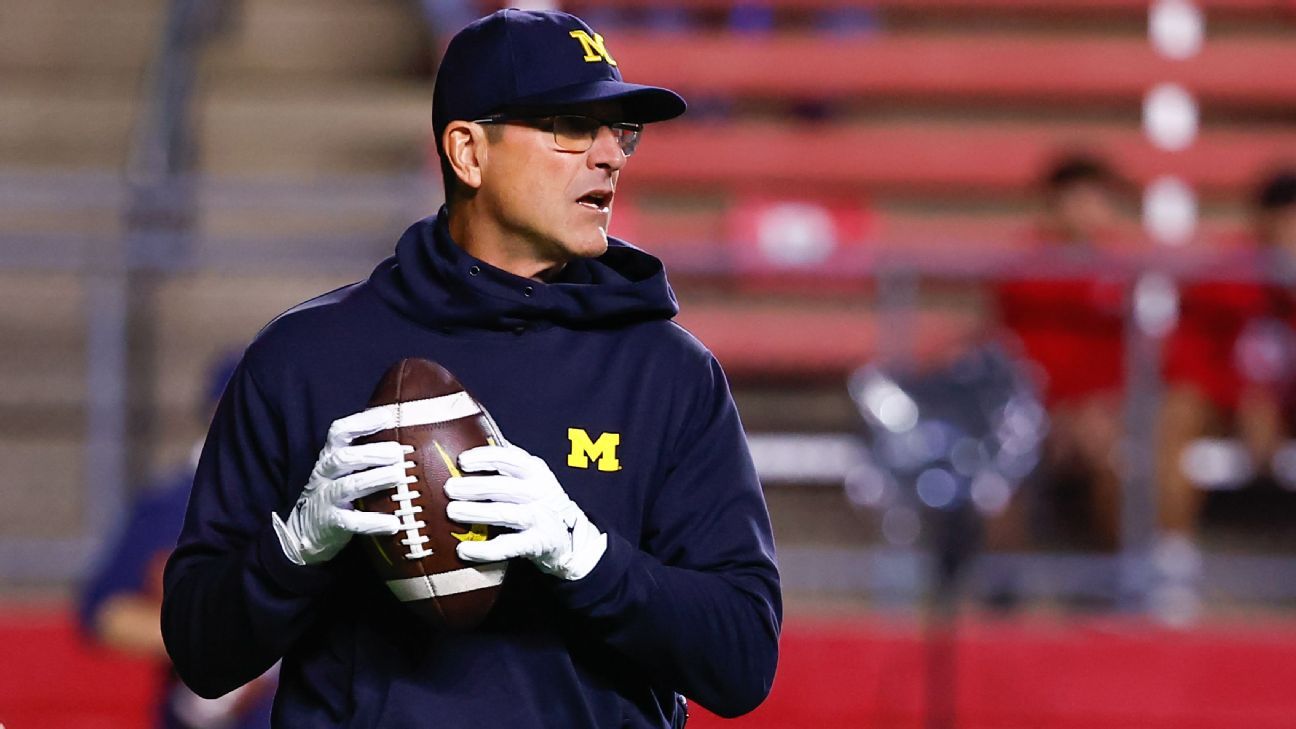 Since 2015, Jim Harbaugh’s Michigan tenure has featured plenty of highs and lows. But as Michigan prepares for its second straight College Football Playoff appearance, not much has changed when it comes to Harbaugh’s coaching approach or his attire of choice.

“His presence is kind of like an immovable object,” defensive tackle Mazi Smith said Wednesday ahead of Michigan’s semifinal matchup against TCU. “He’s the same guy every day and that’s why we practice the same way every day and we bring that certain type of brand of football.”

Harbaugh’s consistency has led the Wolverines to a 13-0 season, back-to-back wins over Ohio State and now a chance to redeem their semifinal loss to Georgia last year.

Who Harbaugh is can often be summed up by his most well-known quirk: his affinity and dedication to one type of pants. On any given day, players say they will still find their way to the weight room only to see Harbaugh working out — doing squats, pushing sleds — in his patented khakis.

“He loves working out, he always tells us he feels like he’s in his 30s,” linebacker Junior Colson said. “He’s out there working out with us, he’s got his cleats, but still in his khakis.”

“It’s a beautiful thing, man,” Smith said of the khakis. “He’s found what he likes. Most people get caught up on what everybody else thinks about what they’re putting on. He’s going to be himself every single day.”

Sartorial choices aside, Harbaugh’s willingness to get out on the field or be in the weight room has struck a chord with his team. Players such as Colson raved about the morale boost the team has gotten this season when Harbaugh participates in things like the team’s “fourth-quarter finishers,” which are extra drills or workouts done after practice to improve the team’s endurance and willingness to go above and beyond.

“It’s not like he’s just telling us what to do or just sitting back there,” Colson said. “He’s out there with us doing it too. … It feels like he’s a part of the team.”

Smith, in particular, has firsthand experience of Harbaugh’s unabashed ability to be himself and stand by players in a more personal way. The tackle faced a felony weapons charge earlier this year before pleading guilty to a misdemeanor earlier this month. Harbaugh and Michigan said Smith was honest about the incident and they would let the judicial process play out.

“He put himself on the line for me, which is what any good leader does,” Smith said. “A lot of head coaches around the country that you can go play for are quick to throw somebody under a bus, quick to, you know, cover themselves and protect themselves. Coach Harbaugh [didn’t]. And that’s very important when you have somebody at the helm with such a, with such responsibility that, that he got.”

Harbaugh faced some criticism for not suspending Smith after his run-in with the law. The coach had been adamant about Michigan State players who were involved a postgame fight in the tunnel at Big House being disciplined and facing legal ramifications.

Smith didn’t miss any games and remains a co-captain of the team as well as an integral part of the Michigan defense.

“Coach Harbaugh loves us and appreciates us no matter what we’re going through.” Morris said Wednesday. “We have to realize that we’re kids. You know, I just, I left my mom’s house two, three years ago, Mazi still probably lives close to home. So we’re still children and when a child falls and slips, somebody has to be there to help him up. I feel like Coach Harbaugh, in this instance, said it’s OK, let’s get up. We’ll fix it. You know, you can’t do that again. But he was that person in his corner and in all of our corners just saying that we’re going to be OK.”