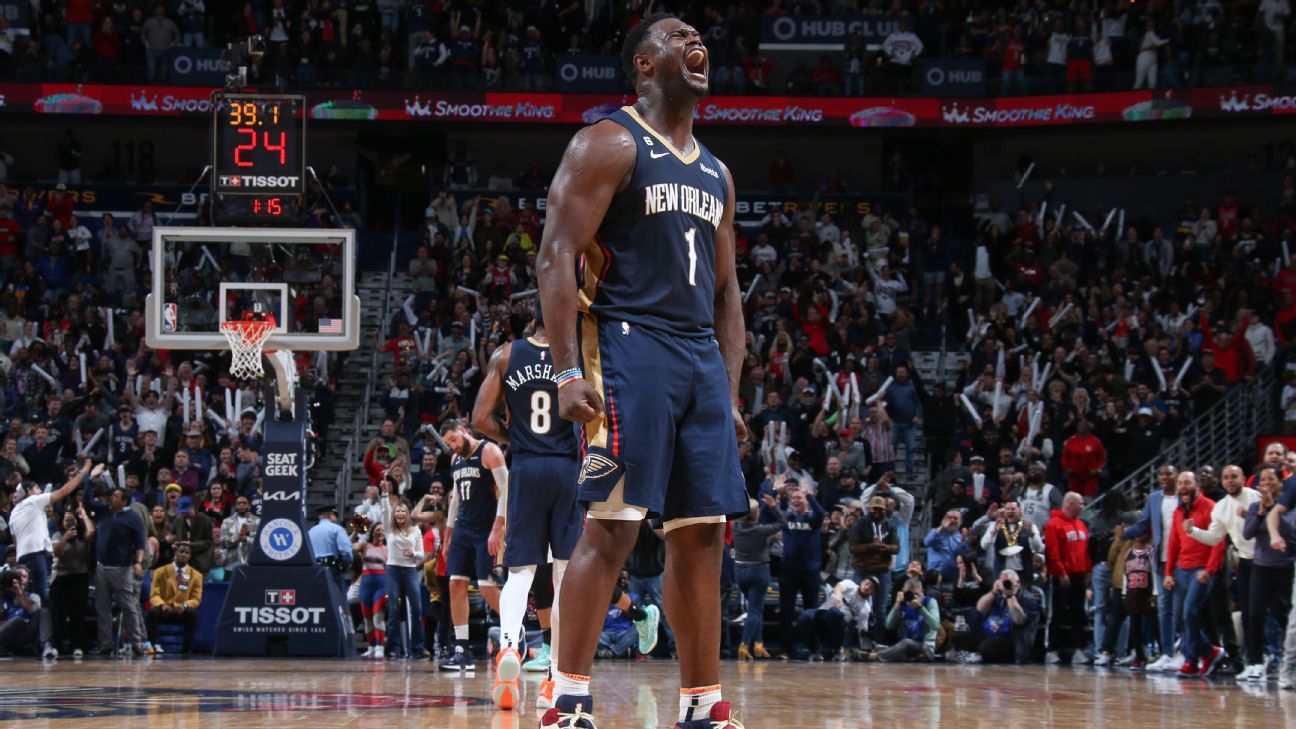 With time ticking away in the fourth quarter and the New Orleans Pelicans trailing the Minnesota Timberwolves, CJ McCollum joked that the Pelicans’ game plan became quite simple.

Zion Williamson finished with a career-high 43 points, including the final 14 points for the Pelicans, who stormed back for a 119-118 win.

Williamson gave New Orleans the lead with 39.1 seconds left after poking away a D’Angelo Russell pass intended for Jaden McDaniels, gathering the ball and dribbling in for a slam to put New Orleans up by two.

After an Anthony Edwards dunk tied the score, Williamson drew a foul on Rudy Gobert — his sixth and final foul — and made one of two free throws to give the Pelicans the lead once again. Edwards’ fadeaway shot at the buzzer was no good, giving New Orleans the victory.

The 14 consecutive points were the most by a Pelicans player to end a game in franchise history, according to ESPN Stats & Information research.

“I watched a lot of old school players and I tried to figure out their mindsets and all their mindsets were the same. People remember winners,” Williamson said. “So, whenever that time comes for me to be done with the game of basketball, I want people to say that he was a winner. And CJ looked at me and said, ‘If you wanna be great, this is the time to step up.’ And that was all the motivation I needed.”

McCollum, who played with Damian Lillard and LaMarcus Aldridge during his time in Portland, downplayed his role in motivating Williamson but did say how special it was to watch Williamson’s abilities up close.

“Like I don’t think I’ve ever seen anything like that,” McCollum said. “I don’t know if we will see somebody with that strength, that power, that speed with the ability to still jump east and west and straight up. He can jump east and west and finish, which is tough and makes it hard for defenses to guard him.”

Williamson had 10 points at halftime but had 19 in the third quarter before his run to end the game. His 33 second-half points are tied for the most ever in a half in Pelicans’ history; Anthony Davis did it twice.

Williamson was 14-of-21 from the field and also went 14-of-19 from the line, a new career high for made free throws and tying his career high for attempts. Thirteen of his 14 field goals came inside the paint; the last was a 3-pointer he hit with 2:17 left to cut the Minnesota lead to two.

Trey Murphy drove the lane and passed it off to Williamson on that shot. He joked that he probably owed Williamson an assist since Williamson is typically the one assisting on his 3. In fact, of Murphy’s five triples on Wednesday, Williamson assisted on four of them.

“I think he’s the MVP of our league,” Murphy said. “You look at, we’re one of the best teams in the West. He’s leading us. He put up 43 on 21 shots. He scored the last 14 points, if I’m not mistaken. Like, he’s different, man. I have never seen anything like this, and I’m just grateful to be his teammate.”

It was New Orleans’ fourth victory in a row, which came after a four-game losing streak. The win, coupled with a loss by Denver, put the Pelicans back into a tie for first place in the Western Conference despite not having Brandon Ingram since Nov. 25.

Pelicans coach Willie Green said Williamson performing the way he did on Wednesday to secure the win while trailing for the majority of the game shows “that’s what great players do.”

“It’s incredible,” Green said. “His touch when he gets down the lane with two, three guys hanging on him and he’s still somehow able to find the glass. And then he does a great job of finding his teammates as well. It’s a luxury for us to have a player like Z and he had a dominant performance tonight.”